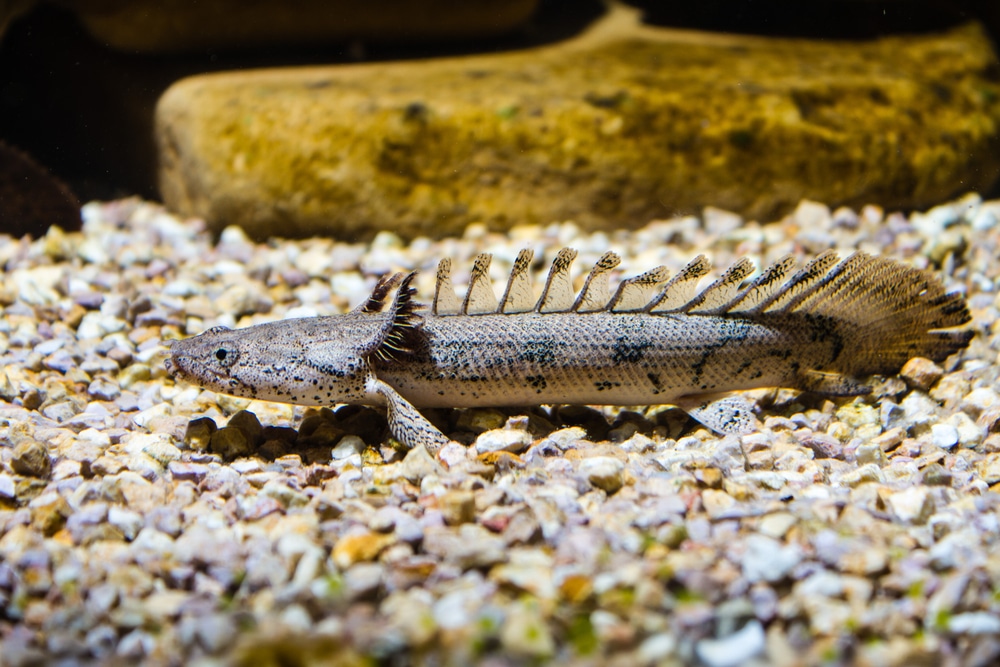 If you’re a fan of unusual predators you’ve probably already considered Arowanas, Stingrays, and other ancient fish. But how about a Bichir? You may not have ever even heard of them but you’ve probably seen them at the pet store once or twice.

These prehistoric predators are fascinating and well worth a look if you want something different for your medium to large aquarium. So let’s get to know the fascinating Bichirs of Africa!

Sometimes called dinosaur eels, Bichirs are true living fossils and some of the most unusual fish in the aquarium hobby. How to pronounce their name is somewhat of a challenge because the word is French in origin. And the French word “Bichir” was meant to be a phonetic take of the Egyptian name – so “Bichir” has no true English equivalent. Using the International Phonetic Alphabet we get /ˈbɪʃɪər/, if that helps!

The Bichir family (Polypteridae) is thought to have split off from the other ray-finned fish nearly 400 million years ago. This group is possibly the one that gave rise to the first amphibians. Their tendency to “walk” on the aquarium bottom with their well-developed pectoral fins is just one of their adaptations that lead to their descendents moving to land.

One lesser known fact about Bichirs is that unlike most fish they can breathe air! Specifically, they are facultative air-breathers, meaning when oxygen levels get low in their environment they can take gulps of atmospheric air.

Bichirs have true lungs as well as gills for water breathing, allowing them to survive when water levels are extremely low and oxygen-depleted during the drought season. In aquaria water is typically well oxygenated enough that they don’t bother breathing air.

Despite being exotic and ancient Bichirs are fairly common in the hobby. Typically they cost between $20 and $150, depending on the size and species. The Senegal or Gray Bichir (Polypterus senegalus) is one of the most commonly encountered, and also one of the smallest. On the other hand, the highly desirable Ornate Bichir (Polypterus ornatipinnis) grows nearly twice as long, at 2 feet!

Here are a few things you should consider when it comes to Bichir care:

Since Bichirs vary tremendously in size, it’s not possible to say precisely how large of an aquarium you need. The smallest Bichirs are still a foot long at adulthood. Since they aren’t especially active and tend to crawl along the bottom, a 55 gallon aquarium is the bare minimum for an adult Senegal or Delhezi Bichir.

A 75 gallon is a bit more comfortable thanks to the extra 6 inches of width. An Ornate Bichir or other large species is going to need at least 180 gallons of space or larger.

However, Bichirs aren’t especially fast growing. You can expect yours to grow 2-3cm per month, slowing down as they reach their final adult size. It may be a few years before your baby Ornate Bichir becomes a tank-buster.

A spacious tank is also important because these massive fish are highly muscular. Typically they move about slowly but a hunting or startled adult Bichir is more than capable of launching itself out of a too-small aquarium!

Considering their ability to thrive in drought conditions it should come as no surprise that Bichirs are not very picky about water conditions.

They thrive in slightly acidic to slightly alkaline conditions (pH 6.5-7.5) and moderate hardness between 4 and 8 dGH. Water temperature should be on the warmer side (78-82F) year-round, however cool spells are associated with breeding conditions (see below).

Filtration is a major issue because Bichirs are large predators who create large amounts of waste. Extended ammonia and nitrite exposure is never healthy for fish and can lead to suppressed immunity and eventual death.

Unlike many other large fish Bichirs are very easy on plants, substrates, and decorations. They don’t dig into gravel, uproot plants, or move caves about. So long as they have ample retreat zones like driftwood crevices or clay pottery to hide within they are much more likely to stay out in the open.

Heavy planting not only replicates their natural habitat but helps lock away phosphates, nitrates, and other algae-growing nutrients. Since you won’t typically use high-intensity plant lights on a Bichir tank, look instead to Java Fern, Java Moss, Anubias, and other low-light plants that can still create plenty of shade and cover for your fish.

Bichir owners have very little to worry about when it comes to tank mates. As long as your Bichir cannot swallow it you’re in good shape. And being so tolerant of a wide range of water conditions Bichirs can be kept in both soft and hard water aquariums.

I recommend staying away from slow-moving fish with long fins, such as fancy Goldfish. While Bichirs won’t be able to eat an adult Oranda or Comet their trailing fins are tempting targets to nip at. Torn fins cause stress and open a route for disease to take hold.

You should avoid fish that are either small enough to be easily eaten or are especially aggressive. Cichlids are typically good tank mates but when spawning they will harass the slow moving Bichir endlessly. Small, thin fish like Livebearers and Tetras will eventually be eaten by even the smallest Bichirs.

Bichirs are carnivorous and will eat nearly anything they can overpower and swallow. In the wild this includes worms, tadpoles, insects and smaller fish. Any of these are perfect for feeding aquarium specimens as well.

When young, offer your Bichir a mixture of live, frozen, and prepared foods. Notice the fan-like projections around their nostrils. Bichirs hunt by smell as much as by sight, especially at night or in muddy water.

Bichirs also have Ampullae of Lorenzini, electrosensitive pores similar to those of sharks and other primitive fish. Using these Bichirs can actively sense the electrical fields other animals give off through muscle contraction, even if buried or in total darkness. Combined with their strong sense of smell they can root out prey no matter how well it’s hidden.

Since smell is more important than sight they will happily take thawed bloodworms, brine shrimp, chopped shellfish, and other somewhat smelly frozen items. Sinking carnivore pellets have a rich scent and are usually accepted with little fuss. However a Bichir trained on live food may need some convincing with feeding tongs before it learns to accept prepared items. 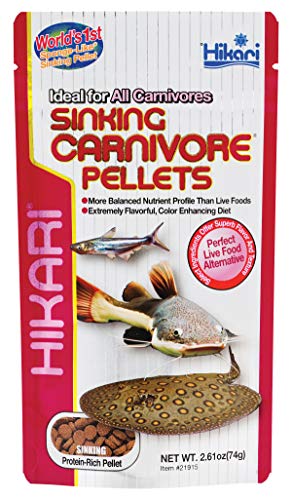 Live food should still be offered on occasion. Both quality and variety matter; try offering live crickets, feeder goldfish, or nightcrawlers to see which gets the best response. Bichirs prefer to feed at night but are easily trained to eat during the day.

Bichirs aren’t commonly bred in aquaria but as they grow more popular, more aquarists are having luck with them. Here are some tips if you decide to give it a try!

Like many fish the differences between males and females aren’t immediately obvious to us humans. Besides scent and other subtle cues, many fish go by behavior rather than sight alone.

That said, there are a few ways to sex adult Bichirs. males typically reach sexual maturity by age 3, with females taking 5 to 6 years. Females younger than this can carry undeveloped eggs however they may not be fully mature, which can cause the males to grow aggressive.

Bichirs aren’t bred very often in captivity except in large outdoor ponds in tropical parts of the world. They rarely breed in aquaria because they prefer seasonal changes in climate, including cool spells and weedy marsh plants to deposit their eggs among. Since many are wild-caught they fail to reproduce as the required habitat isn’t available in aquariums.

The best ways to encourage your adult Bichirs to reproduce are:

Like amphibian fry, baby Bichirs have external gills that are eventually taken in as they mature. Give them a week to absorb their bulbing yolk sack before providing appropriately sized live food, like brine shrimp nauplii!