Black is a color not often seen in aquarium fish, especially pure black. Black fish stand out like shadows against the earth tones of a planted aquascape. Black marine fish are even more striking against colorful live rock or bleached coral sand. Take a look at some of the most beautiful black aquarium fish in the hobby right now!

Here are 5 of our favorite black aquarium fish for freshwater tanks:

Are you familiar with the brilliantly colored Neon Tetra? If so, the Black Neon may be something a bit more subdued yet appealing to you! Like its close cousin, the Black Neon comes from South America.

They form schools of hundreds of individuals and use their iridescent stripes to locate one another in the blackwater swamps they call home. In aquariums they prefer soft, slightly acidic water (pH 6.0-7.0) and temperatures of 75-82℉.

Black Mollies have a rich black color few freshwater fish acn match. Fortunately, they are very easy to keep as Mollies are hearty omnivores that will eat just about anything!

They do have a vegetarian streak so provide them with spirulina flakes and soft leaved plants like Elodea to snack on alongside typical community tank fare.

Mollies also appreciate a touch of aquarium salt in their water. Common Mollies need the least but Sailfin Mollies absolutely require it for long term health. In fact, Mollies can even be acclimated to full saltwater over time. The more salt, the better!

Like most fancy Goldfish breeds Black Moors originated in ancient China. They then spread to Japan, where they were given the name Demekin, before moving outwards to Europe and other countries.

Unlike many Goldfish breeds Black Moors often stay entirely black into adulthood, with few to no orange scales. They typically stop growing around 8 inches in length and can live for decades if well cared for!

You need to take special care when aquascaping a tank for Telescope eye (and Celestial Eye Goldfish). Their protruding eyes are very easily injured by driftwood points, sharp gravel, and other hazards. Keep them in sand or bare bottomed tanks to prevent major injuries.

One of the most unusual looking black aquarium fish is the Black Ghost Knifefish. These aptly named South American natives are typically sold around 6 inches in length. However they get big; up to 20 inches as adults.

They are also nocturnal predators, hunting down smaller fish and worms to eat at night. They have very poor eyesight and rely instead on their ability to create electricity to hunt!

Black Ghost Knifefish create a current around themselves that they can “read” to detect obstacles and the muscle contractions of buried or hidden prey. They even use their electricity to talk to one another.

During the day they prefer to hide in caves or behind driftwood. So provide them with an enclosed hiding place that blocks some of the electricity from their moving tank mates.

Freshwater “sharks” aren’t really sharks; they get their name due to their pointed fins and active natures. Out of all of them, the Red Tail Black Shark may be the most beautiful, though!

As a Cyprinid, it’s closely related to Goldfish, Barbs, and Rasboras. And like their cousins, these “sharks” love vegetable matter as well as protein. Algae and soft plants like Cabomba are some of their favorite things to graze on!

However they are very shark-like in personality if you don’t plan carefully. Red Tail Black Sharks are viciously territorial. As long as you give them a cave they will simply chase out any intruders.

However without a cave as a focal point they often claim the entire bottom of the aquarium as their home. They then spend all of their time chasing any fish that comes near the bottom!

Here are 5 of our favorite black fish for saltwater tanks:

Also known as the Black Sailfin Tang, this is one of the rarest members of the group. They are only found around a few island archipelagos in the South Pacific and live in deeper water than most other reef fish.

This makes them extremely expensive as a result; Black Tangs regularly go for $1000 or more. While they are pricey they aren’t terribly difficult to keep. 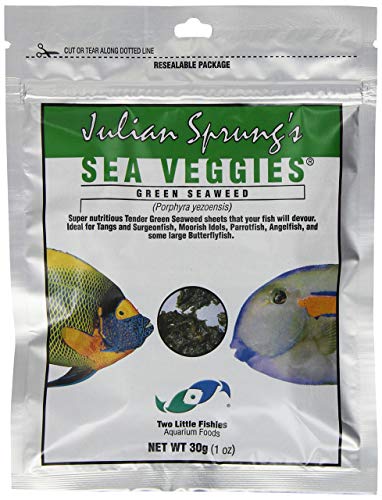 Tangs as a whole are mostly vegetarian so make sure you’re providing them with spirulina flakes, nori (seaweed), and even terrestrial vegetables like blanched spinach. Otherwise they are very prone to hole in the head disease and other nutritional deficiencies.

Considering how far they have to travel to make it to pet stores, Black Tangs may be in rough shape. If one catches your eye, it’s a good idea to let the Tang recover at the fish store for a couple weeks.

Or if you must have this rare beauty immediately set up a quarantine tank for it to recover its strength in pristine water and feed without competition.

Dwarf Angelfish are some of my favorite fish. They are as intensely colored as the larger species yet are more manageable, more peaceful, and usually easier to feed.

The Black Nox Angelfish is no exception. It is a hearty grazer of live rock that greedily accepts algae, invertebrates, prepared, and frozen foods alike! Being such an unfussy eater, it’s not reef safe as a result as it will peck at coral polyps, feather duster worms, and other delicate invertebrates.

Though they are still semi-aggressive Black Nox Angelfish are some of the most peaceful Dwarf Angelfish.

They are also one of the few that can not only be kept with other Centropyge species but even with their own kind, so long as the tank is at least 100 gallons in size.

Also known as the Humuhumu’ele’ele in native Hawaiian, the Black Triggerfish is a striking animal found throughout the IndoPacific as far as the southern coast of Africa.

Like their Pufferfish cousins, Triggerfish are specialist invertebrate eaters. They use their massive teeth to crunch through sea urchins, clams, lobsters, and other hard shelled fare.

You’ll need to provide them with crunchy food in aquaria because their teeth continually grow. A Triggerfish that eats only pellets may eventually have teeth that grow too long and prevent it from using its mouth properly.

Black Triggerfish are very hardy aquarium residents. However they are not only large but often aggressive. And even a brief snap at a tank mate (or your hands) can do a lot of damage thanks to their sharp teeth.

There are actually a few Black Cardinal Fish species that share the same name and look very similar to each other. However Apogonichthyoides melas is the most common species to end up in stores.

These Cardinal Fish aren’t quite schooling fish yet they prefer being kept in small groups rather than singly. In nature they often cluster to hide among sea urchin spines where predators can’t get at them. They feed on the tiny invertebrates sea urchins uncover as they graze along the bottom.

In aquariums they tend to be territorial, forming small no-go zones and constantly squabbling for influence. However their spats are mostly ritual; just flared fins and occasional dances for dominance! They also completely ignore their tank mates.

Domino Damselfish are a gorgeous jet black when young with a single white spot. They are very active, tolerant of a wide range of water conditions, and eager eaters. This makes them very popular as the first fish for new saltwater aquarists.

Unfortunately, as they get older, the black fades to grey, and they become some of the most aggressive fish in the hobby. Domino Damselfish are nippy, territorial, and downright mean to their tank mates in most cases.

So make sure you provide them with at least 40 gallons of space for the other fish to avoid their chosen territory.

Domino Damselfish when young engage in Clownfish-like behavior with Sea Anemones as well, preferring Carpet Anemones (Stichodactyla sp.) as hosts. As they mature they eventually leave their anemones, however.