Aquarium plants are typically seen as a universally good thing. They do so much to make the environment better for our fish. But can an aquarium have too many plants?

Generally, an aquarium can not have too many plants. As long as your fish have space to swim, you can’t really overdo plants. Even thick plant cover simulates the natural habitat of many fish, especially small community species like livebearers that are typically prey in nature.

That being said, there can be a few downsides to an aquarium that becomes overridden with plants. In this article we will share what these downsides are along with how you can keep the right ratio of plants in your setup.

The good news is that no matter how many aquarium plants you have, they won’t cause your fish any harm. Except for a few specific instances I’ll cover below. Plants convert carbon dioxide (CO2) into biomass and release oxygen which fish (and us) need for survival.

Plants also gobbe up free-floating ammonia, nitrites, and nitrates for food. These are waste products of both fish and bacteria and cause all sorts of problems if they’re allowed to build up.

The Nitrogen Cycle is how these agents are broken down in an aquarium. And water changes provide another way for ammonia, nitrites, and nitrates to leave. But plant uptake is both natural and mutually beneficial to all involved.

Problems with Too Many Plants

As wee shared in the beginning of this article, there can be a few downsides to keeping too many plants in your aquarium. Here are a few things you should look out for:

Aquariums are always running at a higher stocking level than what you’ll find in nature. Therefore there’s always plentiful nitrogenous waste for plants to uptake. Plants prefer ammonia but will grab onto nitrite and nitrate if there’s nothing else.

However plants also need iron, potassium, carbon dioxide, and other nutrients. And the more plants you have…The less there is to go around. You might run into some problems getting your plants to thrive if you aren’t providing enough of the following:

Lighting: Proper planted aquarium lighting is the most important growth factor for plants. And because plants compete for substrate real estate, they shade each other out as they grow thicker.

LED light fixtures are by far the best option for getting ideal growth out of your plants. They provide a tailored high-PAR (photosynthetically active radiation) rather than spectrums that aren’t ideal for photosynthesis.

More intense lighting can also help make up crowding this but giving your plants the right amount of space is the best technique. Also, layering in low light plants like Java Fern underneath plants with higher light requirements like Amazon Swords ensures both species create lush growth.

Carbon Dioxide: CO2 is the second most important limiting growth factor for most plants. In the atmosphere, there’s unlimited CO2 for terrestrial plants to soak up…But far less of it diffuses into the water.

Unless you’re using CO2 injection your plants will quickly use up what’s available in the water column. Fish don’t create a ton of CO2. And your growth will slow tremendously as a result.

Carbon dioxide is the main source for plant biomass and often helps make up for less light or semi-occasional fertilizing. There are many ways to supplement CO2 but I prefer using paintball CO2 regulators. 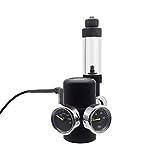 These fit onto a 12-24 oz paintball canister, which can be filled for as little as $4 at brewery or paintball supply stores. Typically they provide enough CO2 to last 1-3 weeks, depending on the size of your aquarium!

Fertilizer: Despite being the least important, fertilizer tends to be the item aquarists buy the most of. Unfortunately, without proper lighting and CO2, you’re often contributing to algae more than anything!

That said, fertilizer is still very important, and the more plants you have, the more important it is to keep them well fed. Plants can get most of what they need from fish waste, which contains trace amounts of potassium and other nutrients. 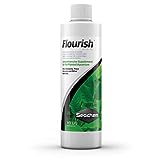 Many plant substrates like Seachem Flourite contain trace amounts of iron and other elemental nutrients. However it’s good to top off your plant micronutrients weekly with a broad spectrum fertilizer.

Dead Leaves and Other Decay Products

One problem that can arise when keeping too many plants is what happens to shed leaves. If not collected by the filter or aquarists they will eventually decay. While a few leaves here and there isn’t an issue, eventually you can get a buildup of mulm that gunks up the substrate.

Mulm is best removed through water changes. The decay of leaves also releases the carbon and nitrogen stored but only in trace amounts unless you have loads of dead plants. In which case there is a much more serious problem happening!

Since there’s no longer any light to fuel photosynthesis they breathe using oxygen just like animals!

Unfortunately, this puts them in direct competition with your fish for available oxygen. In most cases there is more than enough to go around…But in aquariums where there are loads of plants, little aeration, and CO2 injection, fish can suffer.

If you forget to turn off your carbon dioxide source at night, you may wake up to find your fish gasping at the surface for oxygen, or even dead! So remember when using CO2 to turn it off so your plants don’t release enough to gas your fish.

Can an aquarium have too many plants? Generally not, but in specific circumstances, large amounts of plants can make small problems worse. So just be aware of nutrients, decay byproducts, and the fact that plants take up oxygen at night and your fish will be just fine!