Clown Loaches get their name from both their punchy, brightly colored appearance as well as their quirky personalities! They are prone to dashing about, laying on their sides, and even briefly swimming upside down!

These behaviors can be alarming for a first time Clown Loach keeper but they are all normal for these fish. They get even weirder if you decide to keep them in groups: Clown Loaches can talk!

Okay, not in words, but in a grinding noise using their pharyngeal (throat) teeth. The sound is a quiet but audible clicking noise.

This sound can indicate an urge to mate, aggression, and enjoyment of a good meal, among many other things! What other surprises do Clown Loaches have in store for us?

In this section you’ll learn about setting up a suitable tank for your Clown loach, how to feed them, and much more!

Clown Loaches are usually found in stores as brightly colored cheerful little fish anywhere from 1-3 inches in size. However the majority of first-time buyers probably aren’t aware that their new pets will eventually reach nearly a foot long and a couple of pounds in weight!

Clown Loaches can be kept in aquariums as small as 10-15 gallons as babies. However they grow fairly quickly and as adults they need at least 75 gallons of space. Even more space is needed if you’re keeping a group of them.

Clown Loaches are not only large but very active. They take short rests, only to dash about along the bottom, following each other playfully. And when it’s time to eat, they are right at the front of the tank begging for your attention. So give these fish the space they need ASAP!

Being Southeast Asian natives from equatorial Indonesia, Clown Loaches need elevated tropical temperatures. They can survive temperatures as low as 68-70℉ but thrive between 75-84℉. Low temperatures weaken them and open up avenues for ich and other opportunistic infections.

In blackwater regions the water is stained a tea color thanks to all of the tannins floating in it from peat, driftwood, and other decaying plant matter. Adding the right driftwood to your tank can recreate some of this. 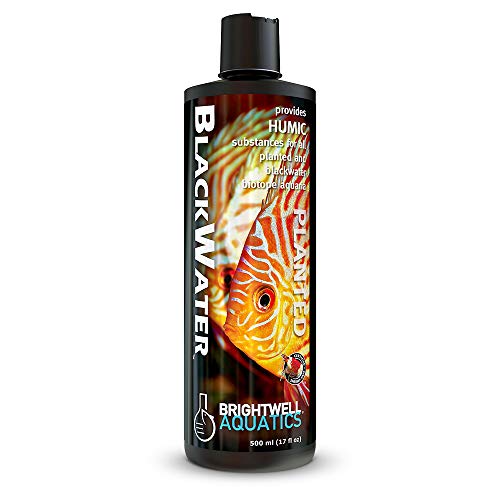 But the driftwood only adds a little and eventually runs out. I recommend using a blackwater additive to provide the tannins Clown Loaches prefer. The dimming of light also stimulates them to take on a deeper, more natural coloration.

Keeping Clown Loaches with live plants can be a real challenge. Unfortunately, many Clown Loaches love to uproot and nibble on plant leaves, especially softer species. However, they also love plants that provide them cover and shade so they can dart in and out of the green thickets they create.

If you intend on keeping your Loaches with plants look for tough, fast growing species that can stand up to the abuse. Fortunately, most of these plants are native to the same waters that Clown Loaches originally come from, in Indonesia!

Java Fern and Java Moss are two of the best possible plants to use in a Clown Loach tank. They are tolerant of nibbling, shredding, can grow in low-light aquariums, and don’t need to grow in gravel.

Both plants are epiphytes, meaning they can grow attached to rocks, driftwood, and other hard surfaces. In fact, they tend to decay and die if rooted in sand or gravel. Epiphytes in general are great alongside Clown Loaches because they can take a beating, including Anubias and African Water Fern.

Most fish aren’t picky about substrates but sand is definitely better when keeping Clown Loaches. They love to lay on the bottom and root about on occasion. The large hard edged grains of gravel are a hazard for their soft skin and delicate mouths.

Clown Loaches are some of the best fish for any community tank! They are mild mannered their entire lives, sociable with one another, and have mouths too tiny to make a meal out of their tank mates. Even as giant adults they can live alongside Guppies and other small fish.

So long as you provide them ample living space and the right water conditions, your Clown Loaches are pretty much guaranteed to do well with your fish! Be mindful when keeping them with shy fish as Clown Loaches tend to dash about, which may startle them.

While they are large enough to hold their own with aggressive fish, it’s not recommended to keep Clown Loaches alongside fish that may potentially bite them. Other Botias tend to be solitary and aggressive as well, making them poor tank mates.

As stated earlier, they have sensitive scaleless skin that’s very prone to getting infections. Even seemingly minor bite wounds can lead to serious infections taking hold. What’s more, the jackknife-like barb Clown Loaches have under their eyes is a defense weapon similar to what Surgeonfish and Tangs use.

If pressed, the barb can instantly rip open the flank or eye of an aggressive tank mate. So it’s better for both fish if you keep Clown Loaches alongside peaceful fish.

Like all Botia Clown Loaches are omnivorous but strongly favor invertebrates. They share a lot of features with Spiny Eels, including tiny mouths with sensory barbs capable of rooting out small worms from their hiding places.

Clown Loaches absolutely love snails as well and are one of the best fish to control a Ramshorn Snail infestation. These snails tend to reproduce out of control and one will eventually become hundreds. However Clown Loaches will eat every single one if given the chance.

When feeding Clown Loaches, think small. These fish have teeth in their throats to crunch up tiny invertebrates but not in their mouths. So they prefer tiny items that will fit in their mouths with ease over larger items like pellets.

Flakes, softened pellets, and frozen or live invertebrates like Brine Shrimp, Tubifex and blood worms are by far the best items for Clown Loaches! Briefly boiled vegetables like Spinach and Zucchini also provide them with some roughage and help keep them from abusing your plants too much.

Unlike many Botia loaches, Clown Loaches are very social and can be readily kept in small or large groups.

Many aquarists believe that it’s impossible to visually tell the difference between males and females. But with a little extra attention, you can sex them reliably, even when young! This video does a great job of highlighting the differences between male and female Clown Loaches!

While they are now mostly captive bred, Clown Loaches are quite difficult, if not impossible, to breed in home aquariums. In the wild they are migratory, similar to Salmon. During the rainy seasons they head upriver to spawn in huge groups.

In Asian fish farms, breeders have worked out methods using temperature and water level variations, food conditioning, hormonal influences, and water flow to induce spawning. However these require much more space and technology than most aquarists have at their disposal.

The majority of aquarium spawnings are happy accidents but they do occur on occasion! As egg scatterers neither the male nor female provides any sort of parental care once they lay them.

Normally in the wild, the exhausted Loaches would return downstream to their favored habitat. But in aquariums they are very prone to eventually eating their eggs if you don’t remove them. So you’ll have to keep a close eye on things if you suspect one of your females is gravid (full of eggs)!