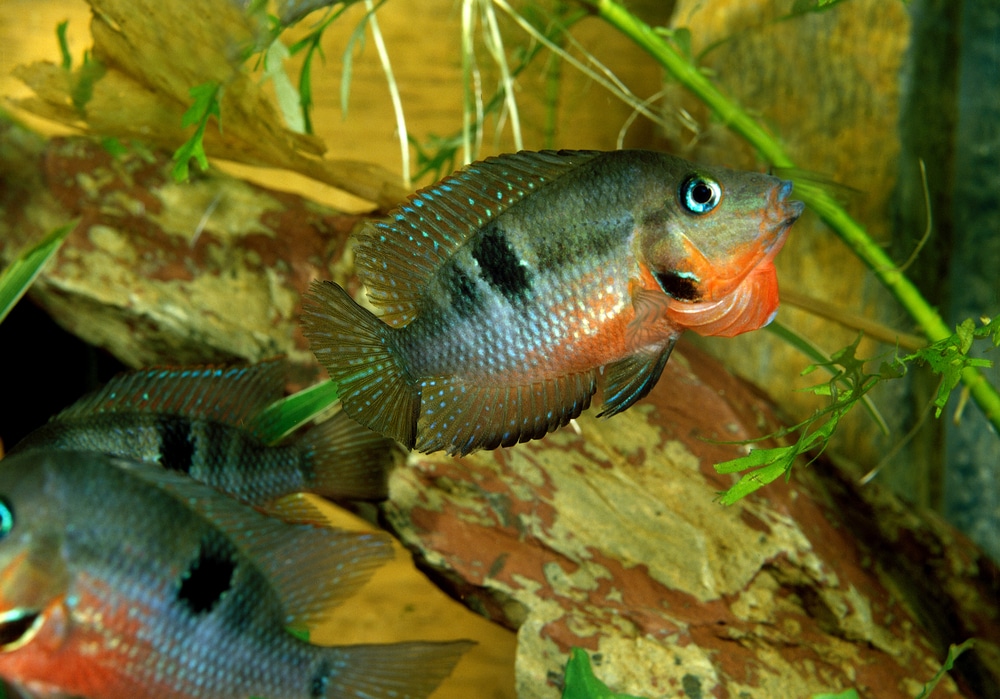 Firemouths are scrappy yet beautiful and one of my favorite American cichlid species. Since they can be a little on the aggressive side we need to choose fish that can put up with their temper yet aren’t super aggressive themselves. These are the 10 best Firemouth tank mates I’ve found to live alongside them!

Here are 10 compatible Firemouth tank mates that you should consider:

When given enough space and ample food Rosy Barbs can grow larger than expected, up to 6 inches, however 4 inches is more common in aquaria. Both the males and females are attractively colored. However the males are much more intensely pink-red with more green on their backs.

As omnivorous egg scatterers Rosy Barbs are very easy to keep and breed. Provide them with dense aquatic plants like Guppy Grass or Java Fern to lay their hundreds of eggs in. And feed them a varied diet of flakes and fresh items like bloodworms for intense color.

Like most medium sized barbs the Rosy Barb can be a fin nipper on occasion so keep them away from Bettas and other slow tank mates with long fins. Adult male Firemouths won’t tolerate nips, however, so their trailing fin extensions are safe from curious Rosy Barbs!

Livebearers aren’t always recommended as tank mates for cichlids because they are entirely peaceful and their babies will be continually eaten if not saved in time. However adult Swordtails are sizable enough to live peacefully alongside Firemouths.

Both fish are also from Southern Mexico (notice both species in the same pool in the video above along with wild Platies!) and prefer the same moderate temperatures (72-78F) and hard, slightly alkaline water (pH 7.0-7.5)

Considering how small their mouths are, remember to provide small flakes and pellets as Firemouths can eat significantly larger pellets. Swordtails come in dozens of varieties, all of which hybridize with each other and their close cousins the Platy. As a result baby Swordtails often look nothing like their parents – or even each other!

Convict Cichlids are another Central American native that are even more popular than Firemouths. While not nearly as colorful Convicts do have beautiful orange patches on their bellies, especially adult females.

Be careful with matching them with Firemouth Cichlids; in aquariums smaller than 30 gallons your Convicts may claim most of the tank as their territory, stressing the Firemouths out. And should they breed, they may even kill the Firemouths. In aquariums 55 gallons or larger, with plenty of rocky decorations, there’s enough space for both species to claim turf and spar without harm.

If Convicts are a bit too scrappy for your Firemouths consider some of their close relatives, such as the Honduran Red Point (Amatitlania sp. “Honduran Red Point”). Not only do they have brighter colors (more blue and orange) but they are much milder in temperament. They are also significantly rarer yet just as easy to breed; finding a home for the babies is no trouble at all!

Most of the Nandopsis and closely related Parachromis genus are pretty aggressive and several are absolutely enormous, including the Jaguar Cichlid (Parachromis managuensis). However the Salvini is the dwarf of the bunch, with 5 inches being typical and 7 being outside.

The Salvini is also one of the most colorful, with an intense yellow background clashing with solid black, red, and blue. In tanks 55 gallons or larger they make excellent tank mates for Firemouth Cichlids. 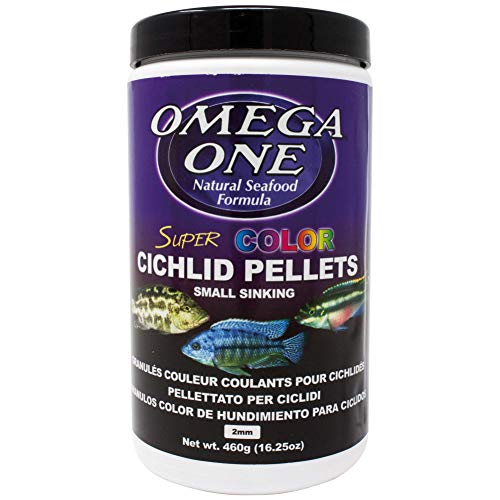 Like their larger cousins Salvini are ambush predators that prefer small fish, invertebrates, and other prey. You can supplement these meaty offerings with prepared cichlid pellets. For boldly colored species like the Salvini you’ll want carotenoid-rich foods to augment their red and gold hues!

When we think of Tetras we typically think of fish from South America. However there are a number of Tetras from Africa, but only a few are commonly seen in the hobby. Of these the Congo Tetra is by far the most common.

Congo Tetras are found in wooded, murky regions upriver in the Congo River basin. They therefore prefer heavily planted, dimly lit aquariums where they can dart among live plants looking for small invertebrates like bloodworms and daphnia.

Since they are large for Tetras and need to be kept in schools you’ll want at least a 30 gallon tank or larger for them to live alongside your Firemouths. Since Congo Tetras live in the middle to upper water column and are entirely peaceful they will get along splendidly.

Congo Tetras do prefer water on the softer side while Firemouths prefer hard, alkaline water. The best way to meet the needs of both species is to balance the chemistry as close to neutral (pH 7.0) as possible.

Corydoras are ideal tank mates for most aquarium fish. They are peaceful, active, boldly patterned, and tolerant of a wide range of water conditions.

The Green Corydoras is one of the largest commonly available species, making it especially well suited to live alongside semi-aggressive cichlids. Despite their size Green Corydoras are still schooling fish and should be kept in small shoals of at least six individuals to feel confident about open water swimming.

Corydoras as a group are excellent tank mates for Firemouths. Stay away from the smallest species like the Pygmy Corydoras, However the majority are sizable enough to resist the occasional chase or nip from a territorial Firemouth!

Plecos as a group are some of the best algae eaters for a Firemouth aquarium. Their armor-like scales enable them to resist the occasional nip and many Plecos are territorial in their own right. I recommend Bristlenose Plecos because they don’t grow nearly as large as some of their relatives and they are significantly more interesting in appearance.

Some are drab brown while others have pale polka dots or stripes. Most are moderately sized and all are quite hardy unless wild caught. Bristlenose Plecos eat mostly algae and soft plant material but do need mature, waterlogged driftwood as well to chew on as it aids their digestion!

Pictus Catfish are sometimes called sharks due to their forked tails, sleek look, and prowling swimming pattern. They aren’t like most of the bottom dwelling, rather lazy catfish we’re used to keeping.

While peaceful towards similarly sized tank mates Pictus Cats are ravenous predators. They need not only prepared foods but worms, brine shrimp, and even small fish as fresh options.

If you do breed your Firemouth Cichlids, beware of your Pictus Catfish! While the breeding pair should be able to fend off the Catfish during the day at night it will be a different story. And once the young leave to fend for themselves they will almost certainly become snacks for the Pictus Cat.

Loaches as a group are great tank mates for Firemouths. Stay away from the smaller, easy to swallow species like Kuhli Loaches and try the larger Clown Loach!

Being scaleless fish Loaches as a group are very sensitive to medications and injuries. Wounds can get easily infected if exposed in water that’s high in bacteria, ammonia, nitrites, or nitrates.

Other than that, they are hardy bottom dwellers with a love of digging in soft sand. Loaches will eat just about anything but are especially fond of invertebrates. Snails are one of their favorite meals – Clown Loaches will eliminate even the most tenacious Ramshorn Snail infestation!

Keep in mind that Clown Loaches not only grow huge but are schooling fish. You’ll need at least 180+ gallons for a group of adults unless you rehome them as they grow. Fortunately, adult Clown Loaches are immensely popular in the hobby.

Rift Lake cichlids are very similar to their Central American cousins in that they prefer warm, alkaline water riddled with rocky hiding places. They are also much more colorful, taking on hues that can compete even with reef fish!

While there are hundreds to choose from not all are good tank mates for Firemouths. Several, including most Mbuna, are too aggressive and territorial. The Electric Yellow Lab (Labidochromis caeruleus) is one of the most easy going Mbuna and brightly colored.

Peacock CIchlids (Aulonocara sp.) are Malawi natives that are also peaceful for cichlids and stay fairly small yet are brilliantly colored.

Rift Lake cichlid feeding habits vary depending on the species but nearly all will accept either prepared or fresh/frozen options (with Mbuna being strongly vegetarian)!