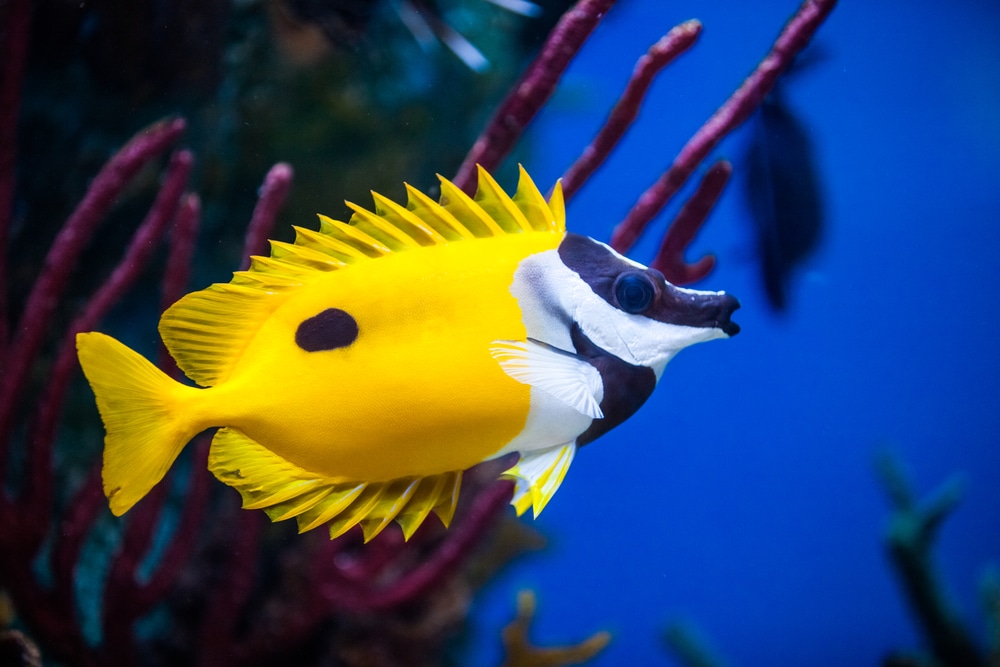 You may be familiar with most of the fish that regularly pass through your local aquarium store. But Rabbitfish are somewhat uncommon and may get you to take a second look. Of the bunch, the Foxface Rabbitfish is the most common and possibly the most attractive as well! If you’re searching for an intriguing vegetarian that’s compatible with a wide range of tank mates, then look no further!

Getting to Know the Foxface Rabbitfish

One look at the Foxface Rabbitfish and it’s not too difficult to see how it gets its name! It has a long, angular “snout” with black and white striping just like that of a fox. The snout is shared with other Rabbitfish; so named due to its appearance and their vegetarian habits.

Rabbitfish are fairly large fish – the Foxface is one of the smallest but it still reaches 9-10 inches. Others of their kind can grow to be nearly 24 inches long! They are important food fish throughout the IndoPacific region but the Foxface Rabbitfish often finds its way into aquariums due to its brilliant coloration and arresting stripes.

Rabbitfish occupy a similar niche (living strategy) to Tangs in the wild. They feed mostly on macroalgae like caulerpa and chaetomorpha. However they will consume just about any greenery in your tank, even noxious, problematic kinds like Green Hair, Bryopsis and Bubble Algae. Coralline Algae they have no taste for but then, few animals do.

Their immense appetite for algae plus their general hardiness makes them a favorite for reef distributors and more knowledgeable aquarium stores. In order to prevent algae from spreading to their final customers, hurting their reputation, they may have a Foxface in the coral distribution tank, ensuring their frags remain well polished and free of algae for final sale!

Foxface Rabbitfish also consume a fair amount of invertebrates that they find growing on rocks like worms and occasionally coral polyps as well as free-floating organisms like tunicates and jellyfish. Their flexible diet can make them a bit of an issue for reef keepers but we’ll cover that in a moment.

Foxfaces are aggressive towards one another but are peaceful towards other fish, making them great community dwellers for any set up! Let’s delve into how to care for the Foxface Lo!

Mostly vegetarian and not too large, Foxface Rabbitfish are fairly easy to care for so long as you provide them with space, peaceful tank mates, and a varied diet!

Aquarium size is important for potential Foxface keepers because these fish do get to be fairly large. That said, they are fairly slow growing and it takes a few years for them to reach their full adult size of 8-9 inches.

Since they are all wild-caught, it’s not uncommon to find full-sized adults for sale in local pet stores. However any youngsters you find of any Rabbitfish species will take 2-3 years to grow up, ensuring you have plenty of time to plan out their future condo!

Foxface Rabbitfish are also very active for such large fish. They will patrol the tank constantly looking for algae spots they’ve missed to graze on. 75 gallons is more of an absolute minimum for these fish. The larger the tank you can provide the more comfortable they will be as adults.

Larger tanks also have more space for algae to grow on, providing your Foxface with an abundant source of fresh produce! It’s also a good idea to keep them in larger aquariums if you have other grazers,such as Tangs, Lawnmower Blennies, or Astraea Snails munching away at the greenery so everyone gets a share!

Foxfaces are very undemanding when it comes to water conditions. While you should never subject your fish to elevated levels of ammonia, nitrite, and nitrate, they are tolerant of it for extended periods. That said, any biologically mature aquarium should have levels approaching or at 0 ppm for optimal health.

They also prefer the same range of water conditions as other popular reef fish. You’ll want your temperature to remain between 72-78℉ and your specific gravity (salinity) to remain around 1.020-1.025. While Foxfaces do absorb magnesium, calcium, strontium, and other elements from the water saltwater aquarium salt mixes contain enough of these elements that you don’t need to track the parameters for a fish-only tank. 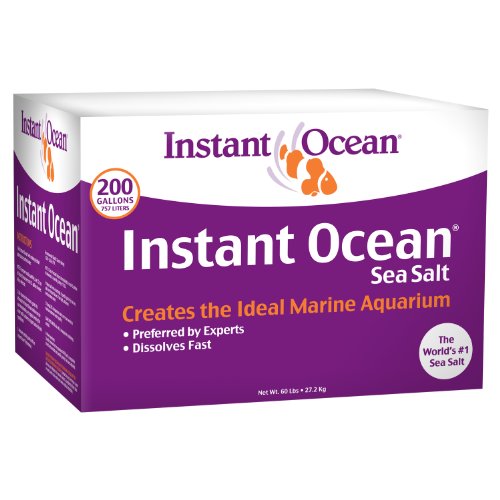 And if you’re keeping your Foxface in a reef aquarium, so much the better, since these elements will need to be at elevated concentrations for the often demanding SPS corals and LPS corals!

Being live rock grazers with habits similar to Angelfish and other problematic reef dwellers, you might think Foxfaces are completely inappropriate for reef aquariums. The fact is that Foxfaces lean more heavily on the algae side of the equation while most problem reef fish prefer eating more invertebrates like corals and sponges.

Foxfaces do consume sessile (non-moving) invertebrates on occasion. But most Foxface keepers report that well-fed fish given a wide variety of foods to address any nutritional deficiencies are quite reef-safe.

They may nip at polyps on rare occasions and they do seem to have a taste for zoanthids in particular. But so long as you provide them with enough algae and invertebrate based meals like brine shrimp your Foxface should leave your corals alone.

That said, they remain reef safe: with caution as it takes some planning and a watchful eye for coral stress. Also, you may see what appears to be the Foxface nipping at the coral when it may actually be going for bits of algae growing between the polyps. So don’t be too quick to judge your Foxface for keeping your corals well cleaned!

Foxfaces and their Venomous Spines

Foxfaces are beautiful and fascinating fish to look at. But something to consider is that they are slightly dangerous as well. Even many pet store employees aren’t aware of this but the dorsal spines all Rabbitfish have are venomous weapons.

The long dorsal fin runs along the back of the fish and is reinforced by 13 hard, very sharp spines that have venom glands at their base. When caught in a net, these can be a major hassle because they can easily get tangled up in the mesh.

But worse is the fact that the venom is extremely painful should the spines break your skin. Foxfaces are generally shy but they may use these spines offensively as well when cornered. They will lower their heads, presenting their backs, and then ram into potential aggressors, such as your hand moving decorations around the tank.

While the venom isn’t dangerous enough to kill it can certainly incapacitate through sheer pain. Like many animal venoms the proteins can be denatured through heat exposure. Running the affected area under water as hot as you can stand for a few minutes will break down the venom and eventually ease the pain. While the venom itself hasn’t been known to kill before, you may opt to see a doctor. Just in case bacteria were also driven into the wound that may lead to an infection…

With their tiny mouths and peaceful disposition, you can keep Foxfaces alongside just about any other fish. Plus, they are large enough that even predatory fish like Lionfish, Groupers, and Moray Eels won’t be able to easily eat one.

Foxfaces are great alongside Clownfish, Angelfish, Damselfish, Engineer Gobies, Grammas, and really any fish that isn’t going to be aggressive towards it. This means that you may have to watch out for larger Damselfish, Maroon Clownfish, Dottybacks, Tangs, and Angelfish, which often show intraspecies aggression. A Foxface will always choose to run over flee but keep in mind they will use their defensive spines if pressed, which will cause serious pain to or even kill another fish.

Tangs can be problematic because they are very good at spotting competitors for grazing space, which Foxfaces are. Grazing fish have to be territorial because their food source requires a lot of land to feed off of and grows back very slowly. So they don’t share with each other nor fish that have the same habits as them.

Some of the least aggressive Tangs include the Blue Hippo and Kole Tang (Ctenochaetus strigosus). Keep Foxfaces away from the more aggressive Acanthurus types, such as Powder Blue and Clown Tangs.

Foxfaces also do well with invertebrates like Cleaner Shrimp, crabs, sponges, clams, Starfish, and other reef organisms. As I mentioned before, they are reef-safe: with caution. But as long as you attend to their omnivorous ways (see below) they should do just fine alongside your corals!

Foxfaces are easy to feed and will accept a wide range of fresh, frozen, and prepared food blends. While they lean heavily towards the vegetarian end of the spectrum, it is important that they get occasional meaty offerings. The base of their diet should be marine macro algae, either harvested fresh, pressed into flakes, or offered in dried seaweed sheets.

A great way to keep a ready source of fresh algae on hand is to run a refugium! A refugium acts as a nutrient export chamber for phosphates, nitrates, and other compounds that can cause problems if allowed to accumulate.

Typically, you grow either soft corals or macroalgae within it that soak up these nutrients. You can then prune and toss out the organisms – or feed fresh algae to your Foxface on occasion! 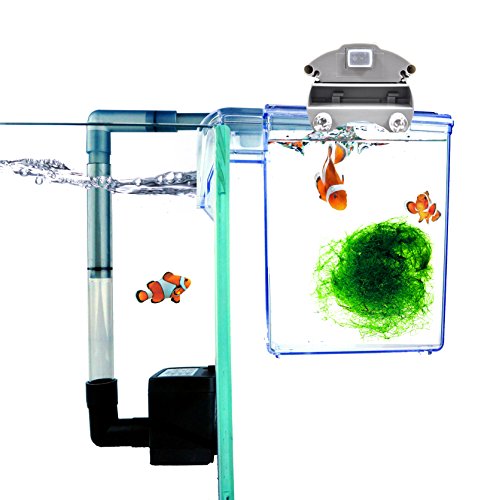 If you don’t want to grow your own fresh algae and your aquarium is mostly spotless, strips of fresh nori (Japanese seaweed) are also nutritious and readily available. Simply attach them to a veggie clip and place it in the tank for them to graze on at will! Nori will quickly absorb water and soften up to be enjoyed by your fish. Just buy a good amount of it because other grazers will greedily dig into it as well, which may scare off the often shy Foxface.

Foxfaces are highly recommended as algae eaters. In fact, they are often better suited for the job than many Tangs, which can be highly aggressive towards fish with similar colors or a compressed body shape. Foxfaces will attack others of their own kind but are entirely peaceful towards other fish, even other grazers like Tangs and Angelfish.

To ensure they get variety approaching their wild diet, you’ll want to offer invertebrate foods and pellets or flakes on occasion. Brine and mysis shrimp will be readily eaten. And a secondary high-quality prepared food ensures that your Foxface will never suffer nutrient deficiencies that may encourage it to nibble on your corals!

As attractive and easy to keep as Foxface Rabbitfish are, there would certainly be a ready market for small, tank-bred specimens! Sad to say these fish are almost entirely known to breed in captivity at present.

Foxface Rabbitfish are pelagic spawners, meaning they meet high in the water column and disperse their eggs directly into the currents that move about the reef. Like many reef animals they use the phases of the moon and the motions of the tides to coordinate their breeding behavior. And again, like many reef animals, the lack of moonlight or tidal variations in home aquariums makes them next to impossible to spawn.

They have been induced to spawn through hormonal injections in experimental conditions. But given the dangers of the procedure and how abundant they are in the wild there’s currently no business that’s started any sort of mass captive breeding program for these fish.