You may have decided to stay away from aquarium plants because you don’t want to fuss with carbon dioxide or fertilizer. Or maybe you’re afraid of having to read up on photosynthetically active radiation and spend hundreds on lights.

If you aren’t fond of the majority of low light plants then what about something a bit different? Something you can set and forget yet is practically guaranteed to grow in your tank? If you enjoy a seaweed-like aesthetic for your aquarium it’s hard to beat Subwassertang for sheer ease of care!

Subwassertang looks pretty ordinary but it’s actually a hot topic in the exciting world of botany! Okay, I oversold it a bit, but it really is an interesting plant because no one really knows where it came from or how it came to be. In fact, it shouldn’t be at all…

Ferns have an extremely complex reproductive strategy that Subwassertang is a part of. In fact, it’s so complex that one particular phase, called the gametophyte, often gets mistaken for newly discovered plants!

To keep things simple, ferns don’t simply shed a seed that grows into a new plant. Rather, they release spores, similar to fungi. These spores then develop into what’s called a gametophyte, a specialized mass of tissue whose sole function is to create sex cells (gametes) that then sexually combine to form actual fern plants.

Since these gametophytes attach to hard surfaces, produce chlorophyll, take in nutrients, and grow, they superficially resemble liverworts, mosses, and other creeping plants. However they are actually just a phase in the life cycle of a higher plant.

Only in 2009 through a molecular analysis was it discovered that Subwassertang is a fern gametophyte! That said, it will maintain its aquatic gametophyte form indefinitely since no one has been able to figure out how to get it to take its final fern shape. It’s like a new species of fern that’s never before been described! Old literature often refers to it as a kind of Pellia, which are true liverworts. Even some of its common names make this mistake.

Botanists assume it’s an African or Asian Lomariopsis fern species that has a genetic issue preventing it from taking its final form. Subwassertang, as far as we know, was only introduced once into the aquarium hobby, making every specimen in the trade a clone of the original.

Which makes perfect sense once you see how incredibly easy this plant is to grow and reproduce…Let’s dive further into the strange world of Subwassertang, shall we?

Subwassertang care is about as easy as it gets. In fact, the only hard part is keeping it from overwhelming your aquarium because it will try its best to!

Considering Subwassertang is stuck in its gametophyte phase, it has several quirks that you should consider when planting and propagating it. For starters, the plant doesn’t really change or age in the way other plants do. It simply gets bigger and bigger…And bigger. It will fill out and form an ever-expanding mass of Subwassertang.

So if you enjoy the aquatic moss look and want something to add green softness to accent rocks, driftwood, and more traditionally shaped plants, it’s hard to beat Subwassertang for that. It’s as easy, and possibly even easier than even Java Moss, that most famous of aquarium staples!

Propagating it is easy as well…Almost too easy, in fact. Any pieces you break away from the mother plant will continue to absorb nutrients from the water column and grow into new masses of Subwassertang.

And since the leaves are somewhat fragile, you can really make a mess if you aren’t careful moving it around. The fragments that break off all have the potential to get stuck in places and grow into new Subwassertang colonies, eventually overtaking your entire aquascape.

Since it’s easily removed I wouldn’t quite call Subwassertang invasive, but it’s pretty close to it. So keep that in mind when buying this plant for the first time; you’re likely going to be stuck with it for a long time!

Subwassertang is as good as Guppy Grass in providing an easy nursery for Livebearer fry or a place for egg scattering fish like Danios to leave their eggs. And much like Guppy Grass, Hornwort, and other easy to care for plants, Subwassertang can even be left to float about the aquarium.

It looks rather messy in this form and I wouldn’t recommend it for most aquariums. But if you’re looking for an easy bit of cover for a quarantine tank, breeder tank, or fry rearing tank, Subwassertang is perfect for this!

Subwassertang, like any plant, will grow faster with better light, however it is an excellent low light plant for most tanks. It will readily grow in conditions that Anacharis, Cabomba, Amazon Swords, and other popular but light-hungry plants cannot.

However it does do much better under full-spectrum plant lighting. But before you get upset with me after I said “no expensive plant lighting required,” know that modern LED fixtures are as affordable as any standard fluorescent aquarium lighting. Yet they last longer, are often brighter, and generate a visually pleasing, photosynthetically balanced white light. 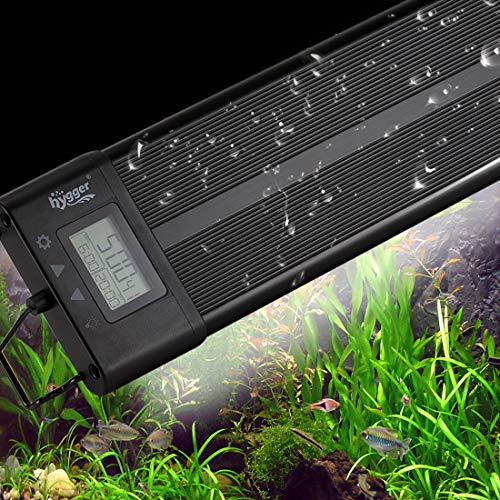 Plants of all kinds require PAR (photosynthetically active radiation) to generate enough sugars to survive. Most tanks come with incandescent or fluorescent lighting, which is typically poor at generating good PAR unless they are designed for it.

Modern LEDs run cool, are often waterproof, and provide precisely the spectrum Subwassertang needs to survive. When not given lighting with a good PAR spectrum you may still see good growth but it will definitely slow it down.

Medium light levels are best for this plant. Intense lighting can be too much for it and can even cause it to melt and die. Low light levels are fine but Subwassertang certainly appreciates just a bit more illumination.

Subwassertang is a funny plant because while it does have preferences there’s little that will actually stop it from growing. High temperatures is one such thing; Subwassertang prefers temperatures on the cooler side (60-74℉), making it not suitable for tanks with equatorial tropical fish like Tetras, Bettas, or Discus.

Any warmer and growth tends to stall out entirely. It’s love of cool temperatures makes it a great plant for coldwater fish like Danios, Goldfish, and Paradise Fish. Just be careful when keeping it with Goldfish as they are going to love eating the easily broken, soft fronds of the fern. While Subwassertang grows fast, you’ll need a lot of it to keep up with how much a single Goldfish can eat in a day!

Subwassertang grows quickly but can usually get all of the fertilizer it needs from fish and shrimp waste and leftover food that decays. It has no preferences or need of iron or other specialty additives, making it very beginner friendly.

Carbon dioxide enrichment is certainly appreciated by Subwassertang and, like good lighting, will boost its growth. But it’s not mandatory, which is handy because most moss-like or carpeting plants demand both intense light and CO2. Subwassertang allows you to achieve a similar look without the expensive and fussiness of true carpeting plants! 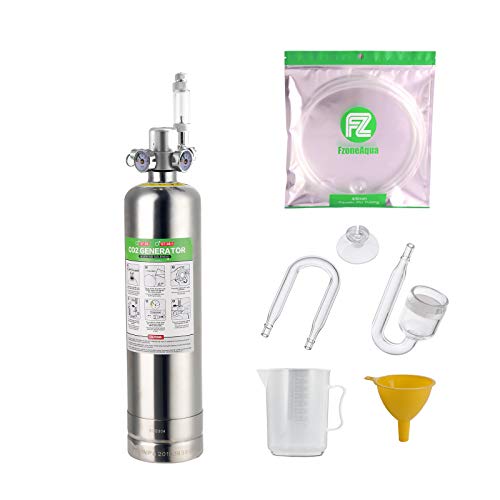 If you opt not to use a CO2 generator but still want CO2, the only other source I can recommend is building a yeast-based DIY CO2 reactor. Because the only other options are liquid CO2 additives like Seachem Flourish Excel and API CO2 Booster.

Unfortunately these chemical sources tend to be very hard on simple plants like mosses, liverworts, algae, and Subwassertang for some unknown reason. In fact, they make a great algicide that knocks it back without killing your plants. Higher plants tend to thrive when aquarists use liquid CO2 but keep this away from Subwassertang unless you’re looking to kill it.

In terms of water flow, gentle to no current works best for this plant. A small amount of flow can ensure debris doesn’t accumulate on or within the mass of the plant. Though a healthy population of small fish and shrimp can also prevent this from happening, as can small, gentle algae eaters like Dwarf Otocinclus.

But any strong current is likely to break off portions of the plant, as will medium or larger fish that try to eat or burrow into the plant. So make sure you provide gentle and cool, but fairly well lit conditions for Subwassertang and it will thrive!

Subwassertang is extremely popular among dwarf shrimp keepers. Dwarf shrimp include Red Cherry Shrimp and Taiwanese Bee Shrimp, which are shy creatures that need live plants and places to hide.

Subwassertang acts as a nutrient sponge, locking away phosphates before problem algae can consume it and ammonia, nitrite, and nitrate before they can harm your sensitive shrimp. Shrimp also prefer the same cooler temperatures that Subwassertang does, making it an easy way to not only purify the water but beautify the tank as well.

Even better, the thick, fluffy fronds provide a nursery for baby shrimp to hide from fish and a grazing place for adults to feed from. They don’t actually eat the Subwassertang itself. Rather, they graze on the thin microbial film that accumulates in and on the plant. It’s a match made in heaven and an excellent example of the symbiotic relationship all life depends on to survive. 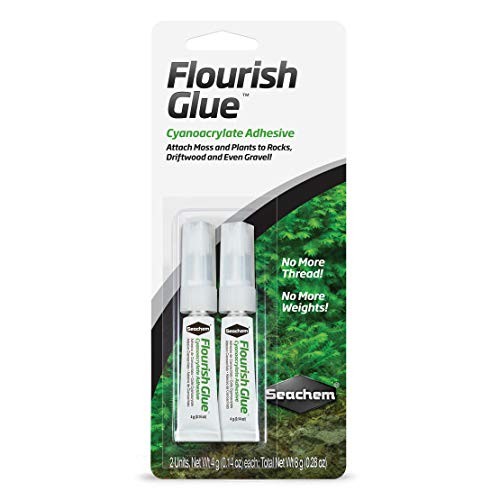 One popular way to aquascape with it is tying it to rocks, driftwood, twigs, ropes, and other hard surfaces for an overgrown appearance. Subwassertang isn’t a true epiphyte like Java Fern or Anubias. It’s far too simple of a plant to create the rootlets these plants use to attach themselves to hard surfaces.

However Subwassertang will grow “through” what you plant it on somewhat, causing it to attach lightly over time. With the help of some fishing line, glue, or another agent, you can encourage your Subwassertang to grow in a particular direction or shape without floating away.

I’d written earlier that Subwassertang is even easier than Java Moss but I wasn’t really fair to this venerable aquarium staple. Java Moss does have two main advantages: it thrives in true tropical conditions (up to 86℉), making it a better fit for a wider range of fish.

Also, Java Moss is a true moss and therefore an epiphyte. It can physically attach itself to hard surfaces and unlike Subwassertang, it isn’t in danger of suddenly floating away. Java Moss is therefore easier to integrate into an aquascape and while it does grow like crazy, it’s easier to keep tidy as well.

Subwassertang is a great coldwater to temperate tropical fern that offers a look no other plant really has. It’s next to bulletproof and you can either aquascape with it or literally just toss it into the tank and walk away! It has a few quirks, especially its love for cool water, but is otherwise a great fit for aquarists who want something both easy yet just a bit different!