The African Great Lakes form one of the closest analogues to the coral reefs. Home to a dizzying array of brightly colored fish, these rocky reefs are populated by schools of large predators that are some of the most majestic cichlids in the hobby!

The Frontosa is a top predator that’s both beautiful and easy to care for once you’re aware of a few quirks. Let’s discuss the care and breeding of this highly desirable cichlid!

All About Frontosa Cichlids

Lake Tanganyika is one of the oldest, largest lakes in the world. It’s over 8 million years old and home to one of the most diverse cichlid collections to be found anywhere!

Cichlids have evolved from a single ancestor to fill nearly every niche available in the lake. From schooling planktivores to deep water predators, cichlids are the dominant fish in the lake.

Frontosas are the lions of this deepwater habitat. They are typically active at dawn and dusk, hunting surface dwelling fish and then returning to the depths as the sun rises.

Their Latin name is especially descriptive, using “cypho” from Ancient Greek to describe the curve of their forehead, and “frontosa” to point out how large it is. “Tilapia” is an African word of unknown origin for “fish.”

All in all, a name perfectly suited to these stately giants. And like many Rift Lake cichlids regional variants exist that have slightly different characteristics than the standard Frontosa.

There is also one more species in the genus: Cyphotilapia gibberosa, which is extremely similar except it’s slightly slimmer. The gibberosa Blue Zaire morph is especially popular among rift lake cichlid keepers! Also, C. gibberosa has identical care requirements to C. frontosa.

Here are some factors you should consider when keeping Frontosa cichlids:

As some of the largest cichlids in Lake Tanganyika, Frontosas require especially large aquariums as adults. For a single specimen you’ll need at least 75 gallons of space. 55 gallon aquariums are unfortunately too narrow for a single adult.

If you’re keeping a harem to breed you’re better off with 125-150 gallons for 4-6 fish. Like all large predators Frontosa Cichlids also create large amounts of waste, making a high-powered canister filter essential to healthy water quality.

Like all Rift Lake cichlids, Frontosas are mostly undemanding except for water chemistry. Lake Tanganyika, in particular, is extremely alkaline due to it’s tropical location and the accumulation of dissolved salts like calcium carbonate.

In fact, of the three African Great Lakes, Tanganyika contains by far the most dissolved salts and minerals. It’s three times as salty (NaCl) as Lake Malawi and six times as salty as Lake Victoria. The likely reason for this is Lake Tanganyika’s great age; it’s many millions of years older than the other two lakes and minerals have had way more time to concentrate in its basin.

The African Great Lakes are all extremely stable bodies of water with very little seasonal variation in temperature and chemistry. Aquarium-raised cichlids tend to be hardy but even moderate shocks can be fatal to wild-caught specimens. Therefore, Frontosas require the following water conditions to thrive and breed:

I highly recommend Seachem products in general because they have a great line of agents targeted to specific water quality issues. Specifically, their Tanganyika pH buffer adds the necessary minerals to duplicate the conditions of the lake and help maintain those conditions.

Frontosa Cichlids are master landscapers, which can frustrate your aquascaping plans. They love to dig even when they aren’t breeding and will make piles of sand or gravel throughout their turf.

Sand or smaller gravels are recommended and many aquarists even use marine aragonite sand or crushed coral, which helps buffer the pH towards alkalinity. The pure white of aragonite also offers a striking contrast to the deep black and blue tones of mature Frontosas.

Any plants that aren’t attached to rocks with a strong rhizome like Java Fern or Anubias are eventually going to be uprooted. Most plants also do poorly in the water and lighting conditions they prefer so stick to the above plants, plastic versions, or rock aquascaping.

Lighting is of some concern for Frontosa keepers because these fish are deepwater specialists that are typically found 30-50m below the surface. Many keepers report that their fish are stressed into hiding when kept under bright daylight continually.

Not only should they have large caves and overhangs to retreat to but they should also be kept under subdued lighting, which encourages them to remain in the open. Despite being large predators Frontosas can often be shy and having nearby hiding places helps them feel secure.

Make no mistake, Frontosa Cichlids are predators and are perfectly willing to eat any tank mates small enough to fit, even other cichlids. As long as their neighbors are larger than 3 inches they should be safe.

Frontosas typically are mild-mannered as far as Cichlids go. They will chase intruders from a claimed patch of aquarium real estate but aren’t especially aggressive except when breeding.

The only real issue is finding fish that can thrive in the same hard water conditions as Frontosas. As a result they are almost always kept with other Rift Lake fish.

Be careful when choosing Central American cichlids as they are typically more aggressive. Many of the larger species, such as the Jaguar Cichlid, may be too much for even a male Frontosa. Jack Dempseys are one of the best choices, however.

Besides fish that are small enough to be eaten, you’ll need to be careful choosing large soft water fish. Many large fish are from South America and Southeast Asia and don’t do well in extremely hard, alkaline conditions.

Considering the water conditions Frontosas prefer, Livebearers would be perfect except they are all too small to avoid being a meal. The largest Sailfin Mollies may be able to live alongside adult Frontosas, however.

As alpha predators in their home lake Frontosas need plenty of protein to keep growing. Live and dead fish, chopped shellfish like mussels and shrimp, worms, and other animal-based foods are essential for their health.

While smaller fish form the bulk of their diet pet store feeder fish aren’t especially high quality. I would only feed them sparingly unless you are quarantining them to ensure they aren’t carrying parasites or bacteria. 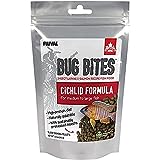 While there are plenty of carnivore pellet formulas on the market I prefer Fluval Bug Bites. They list animal protein as the first three ingredients and use less of the wheat and corn based fillers that make up most fish food.

One notable quality many aquarists report is that Frontosas aren’t especially fast feeders and aren’t willing to compete at the surface with other fish. You may need to use feeding tongs with pieces of fish or meat to ensure they get their fair share but in a species-only aquarium this is less of an issue.

This footage is a great example of how relatively dainty Frontosas are when it’s time to eat. Notice how they go for big gulps and then pause. This video also offers some solid advice on how to encourage your Frontosas to be more confident in the open!

Interested in breeding Frontosas? This section is for you!

Unlike most cichlids, Frontosas can be a little challenging to tell males from females. They look nearly identical until they reach sexual maturity, which takes roughly 3 years. By then the males will have developed a prominent nuchal hump and typically have longer extensions to their fins.

However females are quite blocky themselves and they aren’t any less colorful. Frontosas are also far more selective when it comes to mates – the best way to ensure a successful spawning is to raise a group of young Frontosas together.

Starting with 10-12 young fish, as they mature, you should remove the males until you’re left with 1 or 2, depending on the size of your aquarium. In nature Frontosas live in harems – one male breeds with 4-6 females in his group.

Conditioning and Raising the Fry

If you’ve successfully raised your Frontosas to adulthood and created a proper harem breeding is almost inevitable at this point. Since Lake Tanganyika is such a stable environment you don’t need to do massive water changes or temperature swings to stimulate spawning.

They only need to be happy with the care they’re given and be provided plenty of rich food to fuel gamete production. Meaty whole foods are especially important; try to feed as few prepared items as possible and offer fresh and frozen dishes to prepare them.

This stage is especially important because after spawning the female stops eating and needs the fat reserves.

Like most rift lake cichlids, Frontosas are mouth brooders! Once the male and female embrace and fertilize their eggs the female scoops them up into her mouth where they remain safe from predators. She then spends a month not eating while the eggs incubate.

Once they hatch the female will let them out where they form a loose cloud around her head while the male stands watch. Should either parent signal the fry will quickly dart back into her mouth: the safest possible place considering Frontosas are predators themselves.

Frontosa fry are quite large as far as young fish go, roughly ½ an inch long when newly hatched. This means they can accept just about any food for tiny fish: brine shrimp nauplii, powdered flake, and other small items. No need for infusoria!

Roughly 40-50 days after hatching the fry become increasingly independent and begin to move out into the world. At this point you should remove them from the aquarium and raise them in a separate tank. Considering the market for quality Frontosa cichlids you should have no trouble finding them a home!