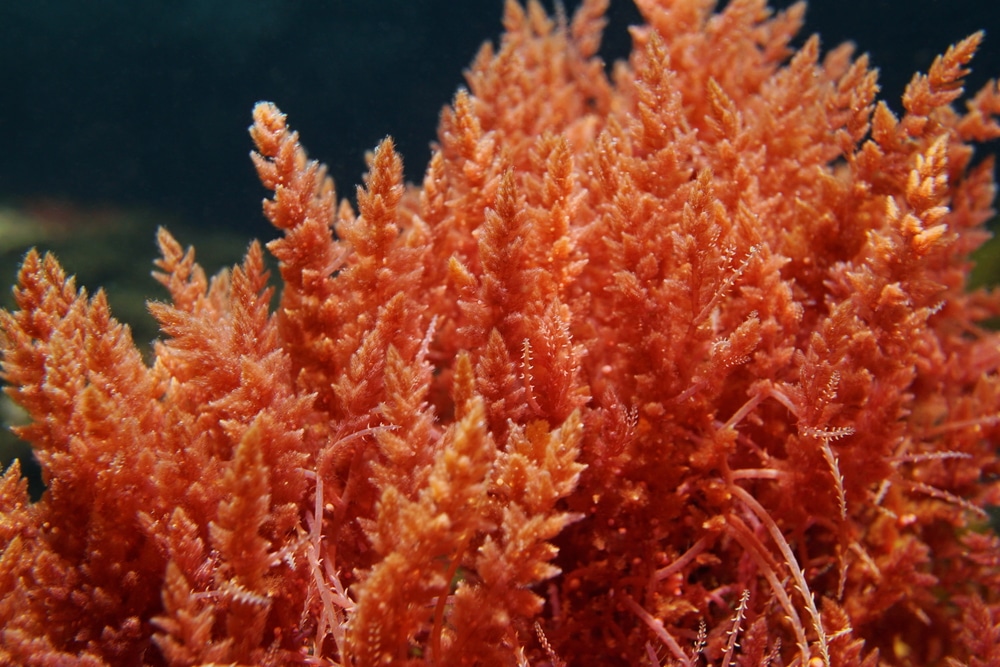 Anemones, sponges, and coral get most of the attention when aquarists start looking for sessile organisms to grow. However macroalgae are another option that have quite a lot to offer.

While not technically true saltwater plants, many macroalgae have much of the same character in terms of color and growth form. They are also a lot easier to care for than coral and are even edible!

In this guide, we cover 10 popular types of macroalgae that you should consider keeping.

Here are a few reasons why you should consider macroalgae for your saltwater aquarium:

As beautiful as corals are even the easiest species are not beginner friendly. Corals require impeccable water conditions, stability, and intense light setups. Many macroalgae species can get by on far less lighting and don’t need ultra-pure water. In fact, they need low to moderate levels of free-floating nutrients to grow properly.

Other species, such as the calciferous Halimeda macroalgae, have identical care requirements to coral and will grow happily alongside them.

Like true plants, macroalgae absorb nitrites, nitrates, phosphorus, and other compounds and elements that can be problematic for the tank’s inhabitants. Corals and other invertebrates are particularly sensitive to nitrates, which most macroalgae love.

Growing macroalgae also provides direct competition to microalgae species that discolor the water or grow as films on aquarium surfaces. Since few other organisms uptake algae nutrients water changes and chemical filtration are the usual control methods saltwater aquarists use.

However, it’s a constant battle against nuisance algae. Many biological control methods like refugiums and algae scrubbers use macroalgae to outcompete problem species! Growing them in the main tank as desirable in of themselves is also recommended.

Marine macroalgae is grown for animal and human consumption around the world. Japanese Nori is a classic example but cultures worldwide use macroalgae in cooking.

For animals and humans alike, macroalgae is rich in B vitamins, iodine, Vitamin A, and trace minerals like iron and zinc. Herbivorous fish like Tangs often suffer nutritional deficiencies like Hole in the Head (lateral line disease) when forced to eat only prepared food formulas.

While you will hopefully be growing your own macroalgae, if yours is slow growing, you can always supplement their diet with dried macroalgae preparations!

Here are a few of our favorite macroalgae species:

Red Gracilaria are some of the most popular macroalgae species in the world for cultivation. They are used in the cuisines of Japan, the Philippines, and Jamaica, just to name a few.

Like all red algae, Gracilaria contain phycoerythrin and phycocyanin, red pigments that mask the more familiar green of chlorophyll. Incidentally, both pigments are fluorescent, giving them a spectacular appearance under UV lighting!

Gracilaria is an ideal type of macroalgae for nearly any saltwater aquarium. It grows very quickly, limited mostly by available nutrients and light. It is highly efficient at locking away free floating nutrients.

And it’s very palatable to marine organisms. Fortunately, Gracilaria is hardy enough to withstand regular grazing and even trims to clone new patches.

Maiden’s Hair is aptly named for its fine hair-like growth pattern that wafts gently in even the slightest current. It has a compact growth pattern and clumping nature that makes it the saltwater equivalent of freshwater carpeting plants.

And like most compact aquatic plants, Maiden’s Hair needs higher light levels as it can’t grow high enough to reach the surface. However it is otherwise hardy and grows quickly in most setups.

Unfortunately, Maiden’s Hair is sometimes seen as a pest as it can come as a hitchhiker on uncured Live Rock. It also produces toxic substances that not only deter many herbivorous fish but can kill nearby corals.

Chaeto (Chaetomorpha) are some of the most popular macroalgae for good reason. They form dense mat-like colonies that are highly efficient at nutrient control. Their swift, aggressive growth makes them ideal for a refugium or algae scrubber because they can easily become invasive in a main aquarium without constant pruning and grazing.

There are several different species in the genus. Some are less palatable than others however the most popular, Chaetomorpha chaeto, is edible. Chaetomorpha also provides dense hiding places for copepods, fish fry, and other tiny inhabitants. However, be certain to carefully screen new algae purchases as unwanted hitchhikers can find their way into your ecosystem like bristle worms or snails.

The name “Sea Lettuce” is a clue to both the appearance and the edibility of this species. This is a widely available type of macroalgae and is one of the hardiest species. Being very soft and delicious to most vegetarians, Sea Lettuce seems like a plant destined to fail.

However, Sea Lettuce grows in the intertidal zone where the land meets the ocean. Growing here, on wave swept rocks and gravel, it will be exposed to harsh light and hot air for hours at a time.

While relatively few organisms can survive here, the extreme temperature and salinity swings are just another day for Sea Lettuce. It also grows quickly enough to outpace snails, limpets, and other intertidal herbivores.

Being a favorite algae choice for most plant eaters, Sea Lettuce is best grown in a refugium or an aquarium with no herbivorous animals. It also prefers more current than most types of macroalgae.

Caulerpa racemosa is one of the most popular species for the aquarium hobby but several others can be regularly found. Caulerpa lentillifera is an especially attractive species typically grown for food in Asian countries but does just as well as an ornamental macroalgae.

Caulerpa macroalgae tend to be pale green with a soft, succulent texture that makes them palatable to animals and humans alike. All can reproduce by fragmentation; breaking them into pieces results in multiple new plants.

Small wonder they are invasive in many regions, including the Mediterranean. Sea Grapes can also get out of hand in aquariums unless herbivorous fish and invertebrates keep them in check.

Blue Hypnea is one of the crown jewels of the macroalgae world. Hailing from Micronesia, this intensely iridescent algae is truly blue in color. Technically it is a species of red macroalgae, and the red pigments show through in poor lighting.

As a compact species, Blue Hypnea needs strong lighting in order to survive and thrives under metal halides and other intense coral lighting. It is a rather slow growing species that forms small mats that rarely grow over 3 inches in height.

Blue Hypnea will remove nutrients but its slow growth means it won’t lock away nearly as much as other macroalgae types. It’s best kept as an ornamental. It also grows too slowly to outpace grazers so keep it away from vegetarians.

Deep red with orange growing tips, Dragon’s Tongue is aptly named. It’s especially variable in form, with a compact anemone-like growth form when given high lighting and a kelp-like form if it needs to grow higher.

Fortunately, Dragon’s Tongue is tolerant of both moderate to low light environments – you only need to decide which growth form you prefer and light it accordingly. It also prefers moderate current so placing it near the outflow of a filter or powerhead will result in better growth.

Shaving Brush Plants are some of the most diverse types of macroalgae in terms of appearance. Some have spherical tops while others are taller or more like a barber’s brush.

However all have a bottom stalk that attaches to an anchor set in sand or other substrates. Unlike the other types of macroalgae we’ve discussed so far, Shaving Brush Plant is a calciferous species. It incorporates calcium into its body, making it unpalatable to most herbivores. A dissolved calcium concentration of 350-450ppm is ideal for growth.

The height can vary, from 4 to as much as 12 inches. Most species prefer sandy bottoms for rooting, moderate to high lighting, and moderate current as they prefer growing in very shallow waters.

Mermaid’s Fan is another calcified algae that has a rigid growth structure. This macroalgae species is fairly slow growing and isn’t kept for its ability to lock away nutrients. Rather, it’s expansive, fan-like appearance makes it an ideal display species that’s on par with coral in terms of exotic appeal.

Mermaid’s Fan is unpalatable to vegetarians as well, making it a safe addition to most aquariums containing herbivorous fish. It does best when given a deep sandy substrate to adhere to and will even send runners without laterally as it matures.

These runners eventually give birth to new Mermaid’s Fans that mature over the course of years. This species is a little sensitive to high nitrates and phosphorus and should not be kept in water especially rich in nutrients as competing types of algae will simply grow on top of it, shading it and leading to death.

Money plants (Halimeda sp.) resemble miniature Mermaid’s Fans stacked one on top of the other. They are also a calcified macroalgae type, using limestone (calcium carbonate) as their structural component.

They get their name from their appearance, resembling a stack of coins. Like most calcified macroalgaes, Money Plants grow slower than other types, and don’t do well in water high in nitrates, phosphorus, and other nutrients.

As a result they tend to grow alongside corals, which have similar requirements, and thus do well in reef aquariums.