Canister filter, power filters, sponge filters…There are so many kinds out there! But what if there was one filter to rule them all? A single large filtration unit with endless possibilities for design, filtration targets…And it even boosted the carrying capacity of your tank in the process? That’s right; I’m talking about sump filters and their many uses for aquarists!

What is a Sump Filter?

Anyone who has spent time in the reef section of an aquarium store has seen a sump filter in action. Canister, power, and other kinds of filters are easily identifiable but sumps are endlessly customizable and variable in size.

A sump filter is basically a box that may be an acrylic or glass custom design or a modified aquarium that’s somewhat smaller than the main display tank it’s attached to. A sump filter can take in water from the outflow or canister filter or act as the main filter in its own right (in which case it’s more commonly referred to as just a sump).

Typically, a sump filter uses a pump to send water from the sump itself into the main tank and a secondary opening that allows water to trickle down into the sump through the power of gravity. You can use either a submersible pump or one attached outside of the sump if you need room to place more equipment within.

Sumps are popular because they are extremely customizable. Also, they help keep the area around your display tank tidy looking. You can place your heater, protein skimmer, and other equipment inside the sump, keeping the aquarium looking polished and minimalistic. Storing these items within the sump also helps protect them from aggressive or skittish fish like Piranhas, which are known for damaging unprotected glass heaters.

Sumps are often thought of as saltwater-only systems but there’s no reason why you can’t run one on a freshwater aquarium. Certain equipment, such as protein skimmers, aren’t really necessary and most freshwater fish are much more tolerant of elevated nitrates and other waste products. Stil, for breeders of sensitive animals, like Discus and Bee Shrimp, or aquarists looking to filter especially large aquariums, a sump makes perfect sense!

Advantages of a Sump vs a Power or Canister Filter

Adding a sump filter to your aquarium adds several advantages over traditional power and canister filter-only designs. The first is that you can dramatically increase the volume of water that’s circulating in your aquarium by using a sump.

It doesn’t add a ton to the carrying capacity of your tank since tank dimensions also play a role in how many fish you can keep. Your fish still need room to swim and form territories. But it does allow you to keep a few more animals than you otherwise would be able to since the overall water volume is greater.

More importantly, a sump filter can improve the health and stability of the fish the system currently holds! This is because the larger an aquarium system is in terms of volume the more it takes to knock it off balance.

A single overfeeding, dead fish, or other pollution event can cause ammonia levels to rise high enough to negatively impact other organisms in a smaller to medium sized tank. Likewise, a brief power outage can cause a fatal chill in small tanks because the water volume is so small.

There’s no exact size that you need to aim for when fitting a sump filter to your aquarium. What’s more important is what you intend to do with it. Will you use a simple two-chamber sump with lava rock for biological filtration and a pump to send water back into the main system? Or do you want to store your protein skimmer, lava rock bio media, refugium, and maybe even a UV sterilizer down there?

You can also run several aquariums simultaneously on a single sump. So long as there is enough media to process the waste of all of the fish within the system and enough water volume to hold the excess water that will drain in case of a power outage, there’s no limit to the size of the filter you can create!

Aquarium retail stores and warehouses often run sump filters for this reason. Rather than having to maintain hundreds of filters at a time they can manage a few sumps for their entire livestock collection.

Disadvantages of a Sump Filter

One major disadvantage of running a sump is apparent if you have multiple tanks connected to a single sump filter. If a fish starts to show signs of ich, it’s much more difficult to isolate the problem tank now. This is why you should never add water from the pet store’s aquariums into your own tank. Even if the animals you’ve purchased are healthy you’re potentially adding parasites, bacteria, or fungi from any sick animal that’s sharing their water.

And let’s face it: sumps also take up quite a bit of space underneath a tank. Sump filters also add quite a bit of weight to your aquarium system, which is a major consideration when planning tanks 125 gallons or larger. Can your room floor stand handle the extra demands a sump filter places on it?

What to Look For When Buying a Sump Filter

Planning your sump filtration system is essential because each chamber impacts the entire system. Placing one element in the wrong place can cause problems for the other elements inside your sump.

Having a sump that holds enough water is important for several reasons. The first is that as we mentioned earlier, having a larger volume of water improves the stability of the entire aquarium ecosystem.

When aiming to add stability to your fish, 10-20% of the volume of the main tank is a good benchmark for a sump system. If you have a 55 gallon aquarium a 10 gallon sump is perfectly sized for this purpose.

Sump volume also determines what extra equipment will fit within it. Are you looking to keep SPS corals and LPS corals? Then you’ll need room for a protein skimmer and likely a refugium.

The volume of your sump also needs to be enough to handle not only the water within but the water that all of the piping normally holds. If a power outage were to occur, water would flow from from your pipes back into your sump. Not necessarily the aquarium itself, unless you placed the holes for the sump intake far lower than you should have.

It’s a good idea to do a test run of this scenery by setting up the system, get water flowing into the lines, and then shut off the power. Watch as the water flows out of the lines and into the sump. At this point, you can add water to the sump to bring it close to being as full as possible.

Once you turn the system back on, water will be pumped back out of the sump and into the main system. The sump’s water level will then go down. You now know the maximum amount of water that your sump and aquarium system can hold. Marking this spot on the side of your sump is a good idea since you can water to top off the system directly to the sump rather than the main display tank, which can stir up debris and disturb sensitive corals.

Remember that as water evaporates or is otherwise lost in the system it will be lost from the sump first because the overflow will ensure that the main aquarium’s water level stays constant. If you aren’t careful in tending to the sump’s water level, evaporation can end up exposing the pumps and other equipment within the sump, potentially causing them to overheat and permanently break.

Once you add water, the water level inside your main tank will remain unchanged. But assuming you’ve marked the high water line on the outside of your sump, simply fill the system to this point and no further!

The number of chambers is important because they determine what the sump is capable of holding and running. You can always add chambers using a sump baffle kit. These are designed to convert aquariums into fully functional sumps for a larger main display tank but can also fit into a unit designed as a sump filter.

Each baffle or chamber wall will have grids to allow water to pass through or solid walls that force water to collect before spilling over. Some aquarists may also add blocks of filter foam or other media to mechanically process water as it passes over. Activated carbon impregnated floss or mesh bags of carbon, zeolite resin, or other media secured in place can also provide chemical filtration. 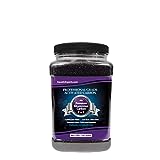 Uses for Each Sump Chamber

The number and size of the chambers will also dictate the uses they offer. Are you looking to set up a refugium chamber within your sump filter? Then you need a long stretch of live sand and room for a grow light (for soft corals, macro algae, and other nutrient exporters). You’ll also need to not use biological filtration before the refugium because the plants and animals within feed on nitrates and other organic debris that a live rock bed would scrub before it gets to them.

You could, however, add lava/live rock, a protein skimmer, or other polishing agents after the refugium, in order to mop up any waste products your living filter misses.

Other uses for sump chambers include a place for a UV sterilizer to run, heater storage, submersible filter and protein skimmer placement, custom media of any sort, and more! Sump filters are the ultimate in customizable filtration units.

Sump filters are mostly used in the marine hobby by aquarists looking to place all of their complex reef equipment in one place that’s out of sight but instantly accessible. And they are also used by aquarium fish retailers and distributors looking to ease the burden of filtration maintenance by running several tanks on a single filter.

Given the significant advantages a sump filter offers, they are well worth the time of setting up. While smaller aquariums (30 gallons and below) may be better off with a traditional power or canister filter, a sump filter can add to the carrying capacity and stability of larger aquariums. Both of these are especially important to sensitive marine organisms that are harmed by even small but rapid changes.

Sump filters also offer endless customization possibilities, ensuring you can meet the needs of any sort of aquatic life!