Angelfish are elegant and enchanting, and they make beautiful additions to a freshwater aquarium. Part of the cichlid species, Angelfish are tall and thin.

Their exquisitely long fins trail behind them gracefully as they swim, creating a magnificent display. Angelfish are impressive in size, too, growing from 4 to 10 inches long.

These striking fish are endemic to South America, though today many are bred in captivity around the world.

Angelfish have been kept as pets for over a century, and selective breeding through the years has resulted in a rich selection of color and pattern varieties.

Today, they are more popular than ever.

Here are some of the most popular angelfish varieties sold and kept as pets. 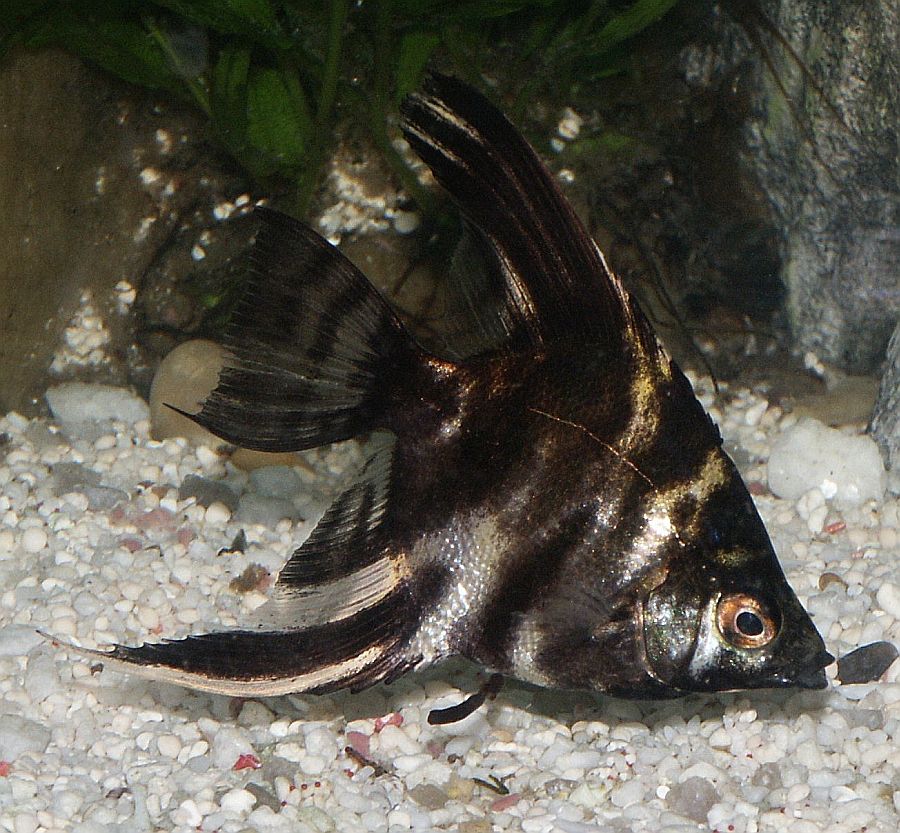 This kind of angelfish is known for the marbled markings displayed on its body. Marbles can come in different color variations, though the marbling itself is usually black.

Marble angelfish are one of the most resilient types; they are generally able to adapt to changes such as temperature fluctuations.

The Veil angelfish is sometimes called the Veiltail because of its remarkably long fins, giving tit an even more dramatic flair than other angelfish.

Take care when housing Veils, as their extra-long fins make them more vulnerable to hazards. In particular, watch out for other fish that might take a nip at those extensive fins. Veils may not do well with water temperature changes, so work to maintain consistency in your aquarium.

The Zebra angelfish is so named because of the distinctive vertical striping that runs the length of its body. Behind the stripes, Zebra angelfish have delicate blue coloring.

The Ghost angelfish is distinguished by its shimmering silver color. In adulthood, they often show some partial striping on their bodies. As with other types, there are variations within the Ghost category. For instance, you might see a Half-Black Ghost.

Albino angelfish are marked by their lack of color and their red eyes. Albinos possess an understated beauty, standing in contrast to their brightly colored relatives.

Usually all or mostly white, they do sometimes have some light golden striping. Be aware, though, that Albinos are more susceptible to certain health issues than other types of angelfish and generally have shorter lifespans.

On the other end of the color spectrum is the Black Lace angelfish with its all-black body. This stark beauty makes this variety of angelfish a very popular addition to home aquariums.

The Leopard Angelfish is known for its spotted pattern resembling, of course, leopard spots. One thing to note about this variety is that those signature spots can actually fade away if lighting conditions in the aquarium are not ideal.

You’ll see the Gold (sometimes called Golden) angelfish in lots of aquariums, as it’s one of the most popular varieties on the market. Gold angelfish start out looking silvery with light gold, developing a richer golden color as they age.

The Blushing angelfish looks a lot like a Gold angelfish, save for a particular detail. This type of angelfish has orange or red coloring on its gills, which happen to look a lot like blushing cheeks.

Koi angelfish resemble Koi carp with their striking orange and white coloring. Each Koi angelfish displays its own unique and beautiful pattern.

This aptly named angelfish has grey coloring. Some Smokey combinations you might see from breeders or pet stores include Smokey Leopard and Smokey Blushing.

This is a rarer variety of angelfish, and it isn’t always readily available from pet stores. However, you may be able to find one by shopping around online (just be sure you’re dealing with reputable breeders). The reason they’re so hard to come by is that these fish are almost exclusively wild-caught, rather than captive bred like most other pet angelfish.

Angelfish require specific conditions to be healthy and happy. Remember that these are general guidelines; always check with the breeder or pet shop you buy from to get specific care instructions.

Here are some of the things you can feed your angelfish.

The last 4 items on the list can be purchased in frozen or dehydrated form at most pet stores and online. Frozen foods should be thawed out before being offered to your fish.

Try to give them a variety of foods for a rich, diverse diet that will keep them at optimal health levels.

Some people feed their angelfish live food. Many experts do not recommend this, simply because the risk of introducing harmful bacteria into your tank is much higher than with prepared foods.

This can also cause your angelfish assume that any new tank companions are simply today’s lunch special.

Angelfish, in general, should be fed a couple of times per day. The typical rule of thumb is to give them no more than they can eat in about 2 minutes.

Overfeeding leads to an overabundance of waste in the tank, which can result in a buildup of dangerous ammonia and nitrite in the water.

Pet freshwater angelfish thrive in a temperature range between 76 and 82 degrees Fahrenheit (though they’ll need warmer water for spawning).

They like water with a pH anywhere from 6.5 – 7.5 (though this can certainly vary, so check with the breeder or pet store when you purchase yours).

While Angelfish may be able to survive in less than optimal water conditions, it’s best to keep their habitat as close to perfect as possible.

Angelfish like to have plants and rocks in their tanks, as they need plenty of places to explore and to hide.

You should provide a large enough aquarium for your angelfish, starting at a minimum of 20-30 gallons (larger depending on how many angelfish and other inhabitants you’ll place in it).

It’s important to outfit your tank with the proper lighting, filtration system, and other supplies. Make sure you know exactly what you’ll need and how to set it up before you move on to choosing an angelfish to bring home.

There are plenty of fish that can be placed in the same aquarium as an angelfish. Here’s a list of some species that are generally considered to be good tankmates.

The following do not make good tank companions for angelfish. Never place angelfish in the same aquarium with any of these.

Other Things You Should Know

If you want to breed angelfish at home, you’ll have to take special care to see the process through.

It’s virtually impossible to spot the difference between male and female angelfish when they aren’t spawning, so many breeders start off with a group of angelfish to watch for them to pair off into male/female couples.

Alternatively, you may be able to purchase a breeding pair from a pet store or on the internet.

Once you’ve established a breeding pair, it’s best to provide a separate tank just for them. It’s especially important to keep the water conditions stable during this mating time.

If everything works out, the female will eventually deposit clusters of eggs around the tank. The male will then fertilize them. After this process is complete, most experts recommend taking the adult fish back out of the breeding tank.

This is because they might just gobble up the eggs and hatchlings, so it’s best not to risk it!

When you’re looking at angelfish online or in a pet store, be discerning about which ones you choose. Ideally, you want to bring home only healthy fish. Here’s what to look for.

Many health problems in angelfish are caused by poor water conditions, overcrowding, or improper diet.