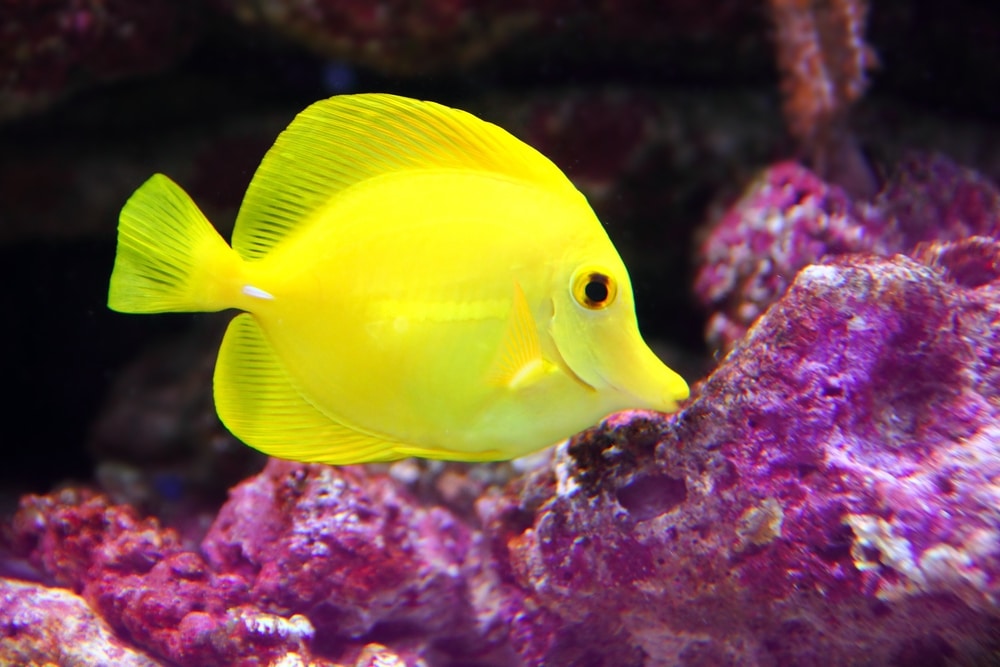 Yellow aquarium fish evoke metallic gold, the rising sun, and other appealing memories that make them some of our favorite fish to collect. And this is one beauty contest freshwater fish give their saltwater brethren a good run for their money in!

If you’re looking to pick up a yellow aquarium fish consider one of these 10 options for your tank!

In this section we cover a few of our favorite yellow aquarium fish that you can keep in freshwater tanks.

As one of the most popular types of livebearers Swordtails come in dozens of stunning color morphs. The Marigold Swordtail is an intensely yellow aquarium fish that takes after its namesake flower by combining a red haze on the rear half of its body.

However no matter the color variety Swordtails are nearly as easy to care for and breed as their close cousins, the Common Guppy. They are mostly carnivorous, eating small aquatic invertebrates but readily eat flakes and pellets sized for small community fish.

And like most livebearers Swordtails appreciate small amounts of algae, blanched vegetables and other vegetable matter in their diet!

Wild-type Angelfish tend to be a drab silver and black barred tone for blending into the flooded forest blackwater conditions; they are native to. However tank raised Gold Angelfish are something else entirely. Angelfish also carry golden scales in the Gold Marble and Gold Veil varieties.

Angelfish have an appealing laterally compressed form and are endearing when small, making them common purchases for beginner aquarists. However Angelfish are Cichlids, which means they can be semi-aggressive towards tank mates and predatory towards anything they can eat.

While they get along fine as youngsters Neon Tetras and Guppies can end up as a meal for an adult Gold Angelfish.

While Angelfish aren’t too difficult to breed they are impossible to visually tell males from females. The best way to breed them is to raise a group of 6 together and let them pair off naturally.

Asian Arowanas are much more popular in countries like China and Japan where they are kept as symbols of wealth and good fortune. However they are occasionally available elsewhere in the world and usually command extraordinarily high prices.

24K Gold Arowanas cost upwards of US$1500 for a 16 inch individual – their metallic yellow scales make them some of the largest and most impressive yellow aquarium fish available. However even the 24K Gold Arowana pales in comparison to the ethereal Albino Arowana, some of which have sold for over $300,000!

If you’re interested in learning more about Arowanas have a look at my Complete Arowana Fish Guide, where I detail all of the care requirements for not only Asian Arowanas but all of their Australian and South American cousins!

In the wild most Barbodes semifasciolatus are actually a moss green color. However the yellow version is so wildly popular that you never see them in captivity. Instead they are known exclusively as Gold Barbs, just like wild Goldfish are a drab green or brown.

And like their Goldfish cousins Gold Barbs are hardy omnivores, consuming worms, invertebrates, fish eggs, soft plants, and anything else they find while rooting along the bottom of ponds and aquariums.

However they stay much smaller than other Cyprinids and are very peaceful, with none of the nipping habits of Tiger or Tinfoil Barbs! Gold Barbs are ideal community tank dwellers that will readily breed if given ample food and thickets of plants to deposit eggs within.

Discus are some of the oddest Cichlids in the hobby. For starters they display none of the aggression the family is famous for. They are shy schooling fish that are quite sensitive to poor water conditions.

This makes them especially difficult to breed however their caregiving instincts are fascinating to behold. Not only do they guard their eggs and young like most Cichlids – Discus actually feed their fry with a milk-like slime secretion released along their flanks!

Tank raised Discus are easier to care for than the highly sensitive wild varieties and come in hundreds of color morphs, including the vibrant Golden Discus. Yellow in Discus can manifest in albinos as well as the mottled Pigeon Blood and standard Golden varieties.

While expensive and intimidating if you’re new to the hobby tank raised Discus are quite manageable and very rewarding! Get to know them a bit better in my Complete Species Guide for these wonderful fish!

The section covers yellow fish species that you can keep in saltwater setups.

While Tangs aren’t exactly easy the Yellow Tang is the closest species to being beginner-friendly of the whole group. They are not only hardy when introduced to cycled, established aquariums but are even increasingly available as captive raised youngsters.

Most Tangs are viciously territorial towards their own kind as well as other Tangs. However young Yellow Tangs raised in groups stand a fair chance of living peaceably into adulthood!

Like all Tangs and Surgeonfish they are vegetarians and need regular offerings of macroalgae, blanched vegetables, and spirulina products to stay healthy. Tangs that don’t get enough vegetation eventually develop Hole in the Head (HITH) disease, which manifests as eroded pits in the face and lateral line. This vitamin deficiency is eventually fatal but can usually be reversed by simple dietary changes!

Few fish can compete with the vibrancy of the Yellow Tang but the Lemonpeel Angelfish is a strong contender. Their vivid yellow tones are nicely offset by the delicate sky blue edges to their gills and eyes.

These blue markings differentiate them from the False Lemonpeel Angelfish (Centropyge heraldi), which is another great choice if you love yellow aquarium fish!

Unfortunately the Lemonpeel Angelfish is one of the larger and more aggressive Centropyge species. This means they should be kept in a fairly spacious aquarium so their tank mates can steer clear of their territory.

Lemonpeel Angelfish are also slightly sensitive to fluctuating water conditions and should be among the last fish added to a new aquarium.

One of the challenges in keeping Angelfish is their need for high quality animal and plant matter. Always choose a prepared food with premium ingredients like salmon, shrimp, and kelp!

The Yellow Watchman Goby is a peaceful bottom dweller that spends most of its time perched on coral outcroppings looking for floating tidbits. They regularly change color depending on their size, mood, and sex, from a muted grey to vibrant yellow.

Watchman Gobies are also known as Shrimp Gobies because they form symbiotic relationships with Pistol Shrimp. The Gobies have excellent eyesight but no defenses other than fleeing.

The shrimp, on the other hand, are nearly blind. However they not only dig burrows but wield claws that can fire a bubble bullet to stuns prey and predators alike!

Watchman Gobies and Pistol Shrimp are often sold as wild collected pairs in order to replicate this relationship in home aquariums.

Basslets are not as common in the trade as they should be. While the Royal Gramma (Gramma loreto) is often seen the rest can be harder to find. However the Yellow Assessor is occasionally offered to marine aquarists looking for something a little different.

Like most Basslets Yellow Assessors are entirely peaceful towards other fish and shrimp. Assessors are also entirely reef safe and won’t cause harm to corals, anemones, and other sessile invertebrates.

However they are micro predators and should not be kept with the smallest of shrimp species. And like all Basslets they are viciously intolerant of their own kind.

Yellow Assessors should be given their choice of caves or rocky overhangs to hang out near. They rarely stray into open water save to feed, only to later dart back to their chosen nook or cranny.

With their unusually shaped mouths these fish are also known as Forceps Fish. Thanks to these specialized jaws Yellow Longnose Butterflyfish can reach worms and crustaceans hidden among live rock and coral that other fish can’t get to.

Yellow Longnose Butterflyfish are good additions to mature aquariums however they are extremely sensitive to ammonia, nitrite, and nitrate. Water quality needs to be optimal – a quality that would normally make them perfect for reef tanks. Unfortunately they use their beaks to not only pick at live rock but coral polyps as well.

Butterflyfish as a whole are difficult for beginners however the Forceps Fish is considered one of the easiest species to start with!