Day time lighting is where we place most of our attention as aquarists. This is even more true if you keep live plants, marine corals, and other organisms that need intense radiation.

But what about night lighting? As it turns out, aquarium night lights have a place in many setups. So when and why would I ever need a night light for my fish?

Here are a few facts that you should be aware of regarding night time behavior in your aquarium:

Aggression, Breeding and Other Night Behaviors

One reason to use aquarium night lights is to observe behaviors that your fish aren’t performing during the day.

Some fish, such as certain Catfish and Tetras, preferentially lay their eggs in the evening or at night. Many reef fish such as Damselfish also spawn in tune with the cycles of the moon. Livebearers like Guppies typically have their babies in the predawn hours rather than at night.

The reasons for doing so range from ensuring their eggs follow the flow of the tides to helping their young escape the attention of predators. Many fish that spawn at night also spawn in open water, where predators may try and eat the parents themselves.

If you’re waking up to find frayed fins, missing scales, and wounds on your fish, it’s also possible that there is fighting going on once the lights go out.

Like us humans, the majority of aquarium fish are diurnal. This means they are active during the day and sleep at night. However if your aquarium light has a timer or you have a room light on well after you turn off the hood light, there may be twilight scuffles you’re not noticing.

Many nocturnal fish show an aggressive side towards sleeping diurnal fish as well. Some of the mid-sized loaches like the Blue Botia (Yasuhikotakia modesta) are especially mean at night. Fortunately, the popular Clown and Kuhli Loaches are some of the most well behaved.

Large Plecos will also occasionally rasp at sleeping fish with broad flanks like Goldfish or Angelfish for a taste of delicious slime coating! Using a dim aquarium night light can help you figure out if one of your nocturnal residents is causing problems.

And even if your fish aren’t causing problems it can be simply interesting observing nocturnal behavior! During the day, Black Ghost Knife Fish are rather shy, hiding in crevices while other fish frolic and play.

However at night, they actively cruise like shadows looking for sleeping prey. They become entirely different animals once the lights are dim or go out entirely!

Many nocturnal fish learn to eat during the day as that’s when the food is around. However if you have an aquarium night light you can provide them food on their schedule.

Some nocturnal fish like Knifefish and Elephantnose Fish tend to be shy and less to compete with day dwellers for food, especially the live food they crave. Others are simply less competent at finding food quickly.

Nocturnal fish tend to have poor eyesight and rely on scent, electrolocation, and other senses. These senses are highly accurate – but usually at close distances. Fish that have better vision will snap up all of the food well before a nocturnal fish can sense it.

However at night, they no longer have to compete to eat as quickly as possible. And a night light ensures you get to watch them in their element!

Saltwater aquariums are a special case for aquarium night lighting.

One of the main benefits marine moon lights offer is a faint light source for your nocturnal dwellers to navigate with. Marine worms, crabs, shrimp, and other members of your saltwater cleanup crew can work that much more efficiently as a result.

A bit of simulated moonlight is not only natural but also prevents injuries from panicked sleeping fish rudely awakened for some reason. Instead of flailing into a sharp coral frag or the arms of an anemone they can navigate safely away from whatever set them off.

Many marine animals also rely on moonlight to synchronize their biological rhythms. Corals and reef fish often spawn when the moon is full or close to full. Water temperatures, currents, and the moon all act as a series of clocks that clue them in to just the right time to spawn! 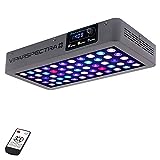 Despite all of this, the best reason for marine aquarium night lighting is being able to watch how your aquarium transforms at night. Seeing what denizens reveal themselves from within the live rock is a fascinating thing to watch.

But be aware as you might find hitchhikers like bristle worms lurking at night! Serpent and brittle starfish also make themselves known once the lights get dim. Strictly speaking most of these detritivores aren’t harmful and they serve a beneficial function in consuming leftover food before it can decay.

But a few species can grow too large and are willing to consume small fish and shrimp, such as the Giant Green Brittle Starfish (Ophiarachna sp.).

While interesting and even beneficial, aquarium night lighting does have a few problems worth considering.

In freshwater and marine aquariums alike, light is life. They provide energy for plants and corals to thrive – but they also fuel the growth of algae as well.

Some, such as macroalgae, can be attractive in their own right and worth growing. But unfortunately, many types of algae can cause unsightly problems in aquariums over time.

Instead of providing specialized moon lights you might consider simply dimming your aquarium lights. The problem with this approach is that if the spectrum is within the preferred range of both plants and algae, you’ll still see some algal growth over time. 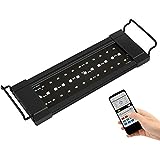 Most aquarium plants, on the other hand, need a fairly strong light source to properly photosynthesize. Dim regular spectrum lighting hinders your plants but helps algae take off!

Therefore, it’s better to either time the dimming of your lights so you aren’t providing too much algal photosynthesis time or use a true moon light spectrum!

Many of the best full spectrum LED plant and coral light fixtures also have blue moon light/night light settings built in. That way you can use the same fixture as a night light rather than installing a second bulb or hood attachment.

Like all animals fish need to get sleep as well. How much they need varies depending on the species and activity level. Many fish don’t quite sleep in the same way we do. Many sharks can’t actively pump water across their gills and remain partially active during their rest phase.

But it’s safe to say that most fish need around as much dark inactivity as we do (6-8 hours per night) as this amount has been shown to have no negative consequences.

A bright night light can wreak havoc with their sleep, much as a bright room light makes it harder for us to get good quality sleep. Moon light is thousands of times dimmer than the sun and is of a much different spectrum, peaking in the blues and other long wavelengths.

This dim lighting is less disturbing, natural, yet still enough for you to witness nocturnal behavior.

So this is a slightly complex question because it depends on how deep the water is! Red light is one of the first wavelengths to be absorbed by water.

Within the first few meters of depth, red wavelengths are mostly absorbed. As a result, many deep ocean fish use red pigments because they look brown or black in their natural habitat.

In fact, many of these bottom dwelling fish can’t see red wavelengths at all. At the public aquarium you may see giant spider crabs and other deep water organisms illuminated with red lights, which keep them blissfully unaware they are under constant surveillance.

However aquariums aren’t usually deep enough to absorb significant amounts of red light. And as you’ve no doubt noticed there are many red aquarium fish as well.

Shallow water dwellers can see red just fine so don’t use red lights as night lights. They simply disturb and irritate your fish unless they are extremely dim. On the other hand they also help preserve your own night vision and are less irritating for folks around you when you’re peeping into your tank!

Aquarium night lights aren’t for every setup. Freshwater fish-only tanks full of peaceful community residents may not need a night light, especially if you aren’t looking to breed them. However if you have night spawners, nocturnal residents, or simply want to provide the most natural environment possible for your miniature coral reef, night lighting is well worth a look!