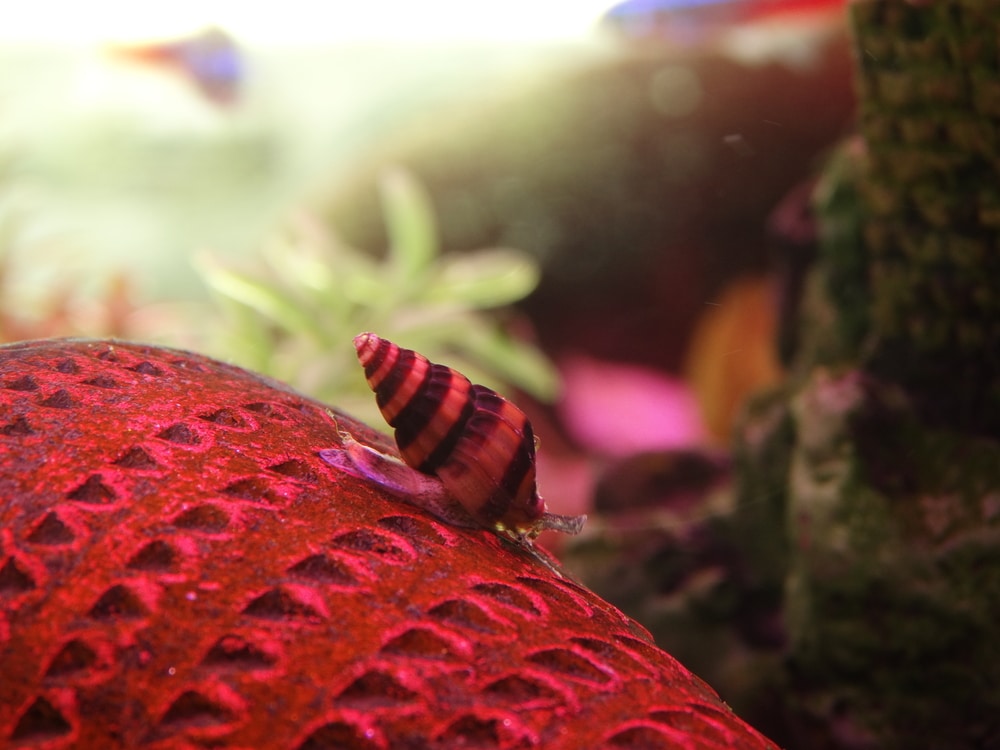 If you’ve ever kept Ramshorn, Malaysian Trumpet, or Mystery Snails then you’re probably aware of their tendency to reproduce and overpopulate aquariums.

Assassin Snails are very different from these species.

Not only do they lay few eggs but they don’t eat algae or rotting plants.

Instead, these are carnivores with a special taste for their mollusk cousins! This makes them great for Freshwater Snail control or interesting in their own right as aquarium inhabitants.

Let’s take a look at the intriguing Assassin Snail!

What Are Assassin Snails?

Assassin Snails are purely freshwater snails from Southeast Asia. They are most common in Thailand and Malaysia, down into Indonesia.

Assassin Snails are quite small; while fully mature specimens can reach 2 inches in length the majority will barely top 1 inch, including the delicately whorled shell.

While not particularly difficult to breed they aren’t as prolific as other snails and don’t come in the dizzying array of color morphs that Ramshorns and Nerite Snails do.

Their simple, bumblebee striped pattern is beautiful, though, and they are one of the more active snail species. When not resting under fine substrates Assassin Snails wander around rocks, glass, and plants hunting for the scent of prey.

They get their name from the fact that they preferentially feed on other snails. While they have an easier time managing similar sized snails like Ramshorns they will gladly bite into even larger snails like Rabbit and Apple Snails.

Assassin Snails have a mouth and rasping radula that they can extend into the shells of other snails. The radula acts as a scouring pad, slowly grating away flesh and blood and weakening their prey. Other Assassin Snails pick up on the scent of an attack and work together to bring down even larger snails.

This behavior is fascinating to watch, akin to a slow motion lion hunt on the Serengeti in your home aquarium!

Despite being specialized carnivores Assassin Snails are easy to care for so long as you make allowances for their diets, water quality needs, and substrate preferences!

Aquarium size for Assassin Snails is irrelevant so long as there is enough food to feed them all. Larger aquariums are best for all aquatic organisms because you have a larger buffer to manage ammonia, nitrite, and nitrate swings.

Invertebrates of all kinds are especially sensitive to nitrate. While fish can tolerate higher levels you want nitrates as close to 0ppm as possible when keeping Assassin Snails. Since they are carnivores that eat at snail-like speeds their food will tend to rot, which will cause frequent spikes in nitrogen compounds if water quality is allowed to get problematic.

Temperature-wise, they prefer things on the warmer side of things. As a Southeast Asian species they should be kept from 70-82F, with warmer temperatures speeding up their metabolisms and shortening their lifespans somewhat.

On the other hand, warmth also encourages them to breed and speeds the development of their eggs!

Assassin Snails are carnivorous and thus entirely plant safe. However they also will not touch any sort of algae and actively prey on snails that do. Algae eaters for tanks with Assassin Snails include Dwarf Otocinclus and Freshwater Shrimp!

Substrate-wise they should be kept in aquariums with fine sand or soil substrates because they burrow constantly. This burrowing makes them doubly useful for not only controlling pest snails but assisting the free flow of oxygen and nutrients to plant roots.

When newly born young Assassin Snails will spend most of their time burrowed, only leaving when food is scented. Adults spend more time above the substrate but also submerge themselves constantly with only their siphons exposed.

Feeding Assassin Snails is the only part of their care that can be problematic. As carnivores they aren’t satisfied with scraps of algae and detritus.

They will accept commercial fish flakes and pellets, which are usually high in fish meal. However they should not be forced to rely on leftover scraps – it’s better to feed them at night or in an invertebrate tank full of slow feeders.

Assassin Snails prefer meaty items like frozen Brine Shrimp and Bloodworm cubes and fresh slices of fish or beef heart. In the tight confines of an aquarium the smell of fresh meat will hit their siphons in seconds.

This encourages them to unburrow and make a direct line towards the source of the scent. Soon your meaty offering will be covered with Assassin Snails busily rasping away. If one of your fish or shrimp dies during the night you may awaken to find it covered in Snails as well.

Sometimes people take this as a sign that the Snails killed the fish but they aren’t capable of doing so.

Since they are carnivorous but otherwise peaceful, Assassin Snails can work in any sort of aquarium setup. They are best kept with a small number of peaceful, similarly sized fish and invertebrates who won’t consume all of the food before the Snails have a chance to get their share of it.

Algae control can be difficult since you can’t keep them with other snails. Any algae-eating fish or shrimp can work however Plecostomus are best avoided as they can suck snails right out of their shells when fully grown.

Cichlids, Pufferfish, large Catfish, and Cyprinids are also poor tank mates because they will simply swallow them whole or crush them with powerful throat muscles and teeth.

One of the most common reasons to buy Assassin Snails is because you have an outbreak of Apple, Mystery, Ramshorn, or Malaysian Trumpet Snails. These species lay massive bunches of eggs (or are live bearers in the case of Trumpet Snails) and can quickly reach plague proportions.

Depending on the size of the outbreak and aquarium, you’ll likely want to purchase multiple Assassin Snails. They can’t reproduce asexually and only lay a single egg at a time so they won’t simply multiply in the same manner as herbivorous snails.

2 to 3 Assassin Snails per 10 gallons is a good start for a tank infested with Ramshorn or Trumpet Snails.

As they come across snail slime trails Assassin Snails quickly follow them back to their source and climb onto the shells of other snails to keep them from escaping.

In the confines of an aquarium they can eventually exterminate other snails – if you buy fewer Assassin Snails than mentioned above then they will do an admirable job of controlling pest snails without eliminating them.

They will also find and consume the eggs of other freshwater snails, except for Mystery and Apple Snails, which lay their eggs above water. For more info on snail eggs, check out my discussion on What to Do When Your Freshwater Snail Lays Eggs!

Assuming they do kill off their food source you’ll then need to either rehouse your Assassin Snails or start offering meaty foods to keep them from starving.

Assassin Snails are not as prolific as other snails but will readily breed in captivity when given the right conditions!

The best way to get Assassin Snails to breed is to provide mates, warm temperatures, 0ppm nitrates, fine substrates for adults and young to feel comfortable in, and high quality food. If there are no live snails for them to hunt then provide fresh and frozen meat.

Assassin Snails are not hermaphrodites and reproduce sexually. While they do have defined male and female sexes the differences are impossible for aquarists to detect. Since only the Snails can tell you’ll want to buy enough of them to ensure you get a good selection of potential matches!

Once well fed, offered mates, and mature, they will eventually breed on their own. Assassin Snails mate and lay a single egg roughly once per month. Each yellow boat-shaped egg sack eventually turns a deeper shade of brown and develops over the course of a month when kept in temperatures around 80F. Cooler water can slow the development process to as long as two months.

The young Assassin Snails burrow into the sand if possible almost instantly and remain hidden save when food presents itself. They will also begin hunting and consuming other snails well before they are fully mature!

Over the course of six months they eventually reach their full adult size and sexual maturity. Like adults they feed on live snails, protein-rich prepared foods, and dead fresh or frozen meat.