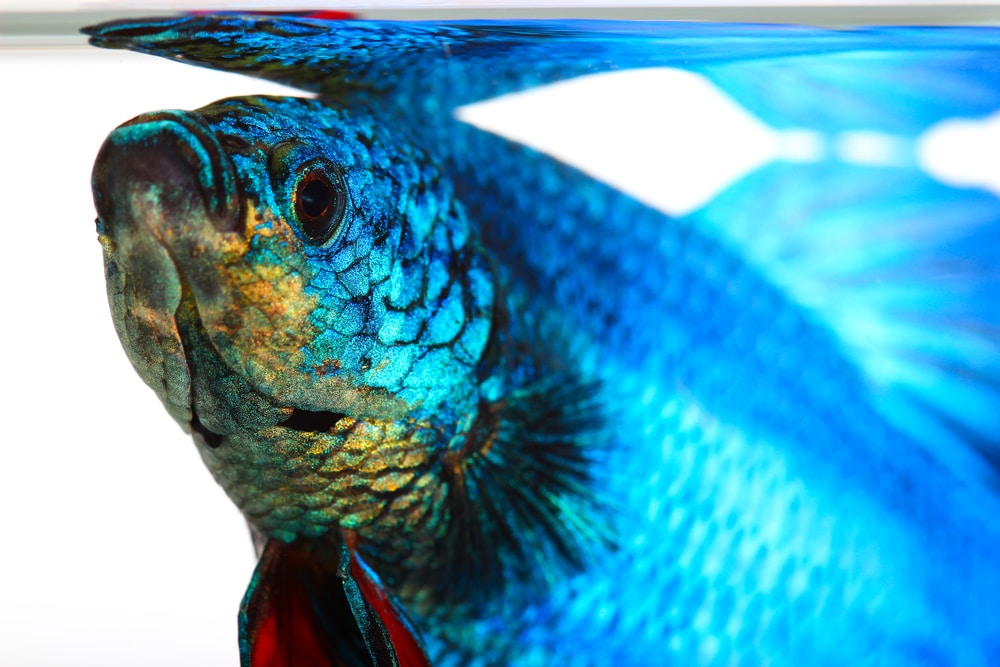 Blue aquarium fish are some of the most popular and eye catching animals in the hobby.

Thanks to both the natural blues of many species as well as the efforts of captive breeders, both the fresh and saltwater aspects of the hobby have some real stunners to consider!

If blue is your favorite color, consider raising any one of these vibrantly blue aquarium fish!

Here are a few of our favorite blue fish for freshwater aquariums:

While blue is not a common color in nature it turns out that blue Bettas are some of the most popular aquarium fish in the trade. In the wild Bettas tend to be a murky brown with red and blue mixed into their fins.

Thanks to centuries of selective breeding by Thai specialists, many captive male Bettas not only have flag-like fins but a brilliant cobalt blue color that’s nothing like their wild ancestors. Female Bettas are stouter and never display the trailing fins. However they can also be intensely blue in color.

One reason Bettas are so popular and hardy is because they are partial air breathers! Thanks to their labyrinth organ they can take gasps of supplemental air when living in stagnant waters where other fish would suffocate.

If you really enjoy Bettas but don’t want to deal with the murderous rages of the males consider setting up a Betta Sorority. A Sorority consists of a group of females living (relatively) peaceably with one another and is the best way to collect several Betta colors in the same aquarium!

Lake Malawi is home to dozens of Cichlids with varying amounts of blue but the Blue Peacock Cichlid may be the most intensely colored of them all. While they are a true blue aquarium fish, Peacocks also come in marble, yellow, and even albino color morphs!

Territorial but only semi-aggressive, Blue Peacocks work nicely for African Cichlid community tanks where individuals dart constantly between rocks and face off in brief aggressive displays. In many ways Rift Lake Cichlid tanks are the freshwater equivalent of reef tanks.

Like all Rift Lake African Cichlids the Blue Peacock demands hard water (pH 7.7-8.6) with plenty of dissolved minerals for good health. Water temperatures should be moderately warm (74-78F) but not excessively so. When kept in conditions more typical for freshwater community tanks they lose color, fail to breed, and eventually die.

Lake Kutubu Rainbowfish are found only in a single remote river and lake in Papua New Guinea, one of the least developed and inaccessible regions on Earth. Despite that they are relatively common in the aquarium trade as they are hardy, beautiful, and easy to breed.

Their iridescent blue flanks are mesmerizing when they school together and their moderate size (4 inches) makes them perfect dither fish for Cichlids and other semi-aggressive fish. However Lake Kutubu Rainbowfish are entirely peaceful and can be kept with Livebearers, Tetras, and other small community fish.

Since they are active, schooling, and medium sized, they should be kept in aquariums no smaller than 30 gallons and in groups of at least 6. Rainbowfish tend to be skittish when kept in smaller groups and males won’t show their best color unless there are females to impress.

Guppies are famously easy to breed, feed, and keep. They also come in hundreds of stunning color morphs, from Reticulated and Fire Red to one of my favorites: the Blue Delta Guppy.

Unlike some blue aquarium fish Blue Delta Guppies are highly variable. Some males have blue coloring mostly in the rear half of their body as well as their wide, triangular delta tail fin. Others, considered higher quality, have blue extending all the way to the head. And like all Guppies the females are far less intensely colored – but significantly larger than her companions.

Since Guppies can remain pregnant for weeks only to suddenly breed unexpectedly, keeping a hanging breeder box on hand ensures females have a safe place to breed. And the young fry can be kept safe and fed by you without other fish making a meal out of them!

Blue Gourami have been a part of the aquarium fish trade for decades. Moderately sized and very tolerant of a wide range of water conditions, they are excellent choices for medium to large community aquariums.

As far as blue aquarium fish go, they can be on the aggressive side, despite their small mouths. Blue Gourami tend to bully most fish smaller than them and males will tend to push around one another if kept in groups. However their lack of real teeth keeps them from causing lasting harm to themselves or tank mates.

Like Bettas, Gouramis are also Labyrinth Fish and breathe air to survive in still, sweltering ponds. If the Blue Gourami is too large and in charge for your community tank the Electric Blue Dwarf Gourami is a fantastic alternative that’s smaller and entirely peaceful!

Saltwater species are known for their intense colors. Here are a few of our favorite blue aquarium fish for saltwater reef tanks:

Royal Blue Tangs aren’t as sensitive as some of their cousins. However they do need a stable, mature aquarium and should never be the first fish to be added. Like all Tangs they are mostly vegetarian and need a good variety of macroalgae along with both whole vegetables and prepared vegetarian formulas to thrive.

When given plenty of space and vegetables Royal Blue Tangs take on a deep blue that contrasts well with their yellow tails and black stripes. They are also some of the most tolerant Tangs of their own kind and can be kept in groups in larger aquaria (150+ gallons).

Most Damselfish tend to be semi-aggressive to aggressive. However the Yellowtail Blue Damselfish is a model citizen if you’re looking for a marine blue aquarium fish!

They are also small and quite inexpensive. And best of all, Damselfish as a whole are hardy enough to be the first inhabitants of a cycling aquarium. Yellowtail Blue Damselfish should be kept in small groups of 3 to 6 individuals. Sometimes when kept singly they can turn semi-aggressive towards fish similar in color or shape.

Yellowtail Blue Damselfish are planktivores, feeding on the tiny crustaceans, baby fish, and microorganisms that freely float in the water column. Along with typical prepared foods they love live foods like Brine Shrimp nauplii and copepods!

Angelfish are famous for being some of the largest and most difficult to care for saltwater fish around. Fortunately, the Dwarf Angelfish (Centropyge sp.) buck this trend and few do a better job than the Cherub Angelfish.

As the smallest Angelfish of them all the Cherub Angel is an excellent choice for smaller tanks in need of a blue aquarium fish to liven things up. Unfortunately, like all Angelfish, Cherubs have to be treated with caution in nano reefs.

Angelfish graze constantly on live rock for sessile organisms, biofilm, and macroalgae. Corals, sponges, and even clams may get nipped on occasion.

While no Angelfish can be called hardy Cherub Angelfish are great additions to mature aquariums that have been fully cycled. Provide a hearty selection of omnivorous options, including Mysid shrimp, standard marine flakes, and vegetarian based flakes or pellets.

While peaceful towards other aquarium fish Cherub Angelfish are problematic towards each other. Males and females get along and may even breed for you. However they are impossible to visually tell apart. And if you get two males they will fight to the death regardless of tank size…

Asfur Angelfish are strikingly beautiful, with a brilliant yellow crescent that offsets the deep blue and black tones. When young they have a marbled white, blue, and black color that’s similar to the closely related Koran Angelfish (Pomacanthus semicirculatus).

Despite their size they are some of the hardiest Angelfish and readily accept a wide range of live, frozen, and prepared foods. Asfur Angelfish are also on the gentle side and can even be shy and retiring. They should be provided rocky outcroppings and caves in order to feel truly secure swimming in open water.

While they are hearty eaters Asfur Angels should still be given prepared frozen Angelfish formulas containing fresh sponges on occasion.

The Neon Blue Goby is one of the best blue aquarium fish for nano reefs and fish only tanks. They are also regularly sold as Cleaner Gobies.

Much like Cleaner Shrimp these Gobies choose a visible spot for larger fish to swim by. They then swim along the flanks, gills, and even inside the mouths of other fish, picking at loose skin and parasites.

While they are mostly peaceful, Neon Blue Gobies can be territorial towards their own kind as well as other Gobies, Blennies, and Dartfish. They tend to choose a favorite perch that they then defend vigorously from intruders.

Providing plenty of perches or simply ensuring they’re kept in a sizable aquarium easily controls the issue. As micro predators they should be fed small meaty items like live or frozen Brine Shrimp and copepods along with protein-rich prepared foods!