Have you purchased your first freshwater Angelfish? Congratulations! These beautiful cichlids are extremely popular and well deserving of their name. Angelfish are typically sold around 1-2 inches in length. So the question is: will it stay this small forever or is an aquarium upgrade in your future?

How Big Do Angelfish Get?

Well, before we answer this question, we first need to decide on something important: what do we mean by Angelfish?

We are definitely discussing the freshwater cichlids that share this name, rather than the Saltwater Angelfish, which come in a wide array of sizes and colors. Incidentally, they aren’t related at all; both fish are simply graceful, have compressed bodies, and showy patterns.

But even freshwater Angelfish aren’t uniform! There are actually three species in the genus Pterophyllum! The first and by far the most common is Pterophyllum scalare, the Common Angelfish.

9 times out of 10, if you’re looking at an Angelfish in the store, it’s a variety of P. scalare. Gold, marble, silver, black, common, albino, koi…The list is a long one!

In general, Common Angelfish can be expected to reach a maximum length of 5 to 6 inches. However, all Angelfish are usually taller than they are long and Common Angels can be anywhere from 8 to 10 inches tall when fully mature.

These Angels are quite hardy because they have been bred in captivity for decades.

All Angelfish prefer soft, acidic conditions. But Common Angels will thrive even in slightly hard, alkaline waters as well, though they are not going to breed for you.

The second most common type of Angelfish is Pterophyllum altum, the Altum or Orinoco Angelfish. These fish are almost exclusively wild caught and shipped straight from South America because they are rather difficult to keep in captivity.

When well cared for, they can eventually grow up to 8 inches in length and nearly 12 inches in height! They have a subdued elegance and naturally curved finnage that really showcases how appropriate the name “Angelfish” is for these graceful cichlids.

Much like Discus, they are highly sensitive to ammonia, nitrites, and other dissolved waste byproducts. Altum Angelfish are found exclusively in shallow blackwater environments and flooded forests where temperatures stay between 78-86℉.

The last and least common is Pterophyllum leopoldi, or Leopold’s Angelfish. These are a dwarf species that don’t grow beyond 3 inches in length and 5 inches in height.

Despite being near midgets Leopold’s are fairly aggressive for Angelfish. Not only this, they actually become worse when breeding. Most Angels can be kept in groups even when spawning but Leopold’s Angelfish will rule smaller tanks in typical cichlid fashion!

What Size Tank Do Angelfish Need?

Since we have three Angelfish to choose from, we need to choose our aquarium accordingly!

You likely have Common Angelfish and if you bought them as silver dollar sized babies, you have some time before needing a good sized tank. When small, they can live comfortably in aquariums 20 gallons or larger.

However as they mature, adult Common Angelfish should have at the minimum 55 gallons of space. 75 gallons is even better, especially if you intend on keeping a group of them. Common Angelfish are sociable and not too aggressive towards their own kind.

They are most likely to breed for you when given the chance to choose their mates! In fact, you really don’t have a choice other than relying on luck because Angelfish are absolutely impossible to visually sex.

Experts can sometimes tell when the Angelfish are already about to spawn. The ovipositor (egg laying tube) of females is noticeably rounder than the organ males use to fertilize eggs with. Other than that, they really are identical!

These are the big boys of the family and need to be spoiled a little more. Given their final size and sensitivity to poor water conditions, you should have at the minimum 75 gallons of space for one or more adult Pterophyllum altum.

Tighter tanks encourage fighting, fin nipping from tank mates, and worst of all, allow waste products to accumulate faster. You can prevent some of this by providing filtration using heavy duty canister filters like the Fluval fX6. 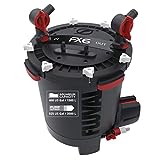 You can also add speciality chemical filtration media like zeolite for ammonia issues or water softening pillows to keep the hardness extremely low.

But prevention is always the best medicine! The more water volume you have, the more pollution it takes before problems arise.

Leopold’s Angelfish are the smallest species and need the least amount of space. Still, they are quite feisty towards both their tank mates and one another. As an absolute minimum you should keep them in no less than 30 gallons of space as grown adults.

Make sure they have plenty of live plants, driftwood, rocks, and other decorations to block line of sight if you have several. A subdominant Angelfish that gets constantly bullied will be extremely stressed if he or she can’t avoid the gaze of the dominant fish at all.

How Can I Help My Angelfish Get Big?

In order to help your Angelfish get as big as possible, consider your aquarium size, diet, water quality, and tank mates.

Angelfish are purely carnivorous in nature, feeding on invertebrates like worms, tiny shrimp, insect larvae, and even smaller fish. Instead of feeding them prepared foods rich in fillers like potato and wheat starch, give them high protein prepared foods like Fluval Bug Bites.

Cutting out the filler and sticking to the protein and vitamins found in insect larvae and salmon is by far the best way to get vigorous growth out of your fish! 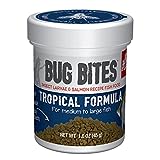 Next, whatever you do, don’t skip the water changes! Angelfish are fairly large carnivores and their waste contains a lot of nitrogen. This nitrogen becomes ammonia, nitrite, and eventually nitrate thanks to your biological filtration capacity.

Lastly, choose their tank mates carefully! Fin nippers like Tiger Barbs and Giant Danios are quick and aggressive enough to do significant damage to the trailing fins of your majestic Angelfish.

Instead, keep them with smaller but robust peaceful fish like Swordtails, Black Ruby Barbs, or Hatchetfish. Smaller community fish like Guppies and Neon Tetras are great alongside Leopold’s Angelfish

But don’t keep them with the larger Common and Altum Angelfish because they are likely to eventually be meals for these larger cichlids!

How big Angelfish get is a more complex question than you might have realized given that there are three extremely different species to consider. However once you’ve identified your Angelfish type, their care requirements are similar.

Warm, soft, acidic water, protein-rich food, and a bit more space than usual for fish of their length. And if you’re lucky, your Angels may even grace you with eggs one day!