If you’re looking to keep true eels then the marine hobby is where you should be looking. True eels are fascinating and the Moray Eel family is home to some colorful, beautiful, dangerous predators that are also full of personality. If you’re intrigued by eels then here are the 7 most popular saltwater aquarium eels you’re likely to come across.

What are Saltwater Aquarium Eels?

The largest group of eels you’re likely to run across in the saltwater hobby are the moray eels (family Muraenidae). They are true eels and members of the order Anguilliformes. The distinction “true eel” is important because there are so many fish that are called eels simply because they are long and thin.

The majority have simply evolved a shape that’s identical to that of a true eel because they live in similar conditions. Most eel and eel-like fish are bottom dwellers that thread their way through caves, plants, coral, and other environments. True eels are usually nocturnal, often migratory, and have a strange larval stage they metamorphose from into the more familiar adult form.

Moray Eels are all predatory and have several adaptations for catching their favorite prey. They all have sharp, needle-like teeth designed either for shearing or puncturing flesh. Even a small Moray Eel can leave a very nasty bite on the hand of an unwary aquarist or nosy tank mate.

They also have a second set of pharyngeal jaws located in their throats, Aliens-fashion! These jaws latch onto prey that’s bitten and drags them further into the throat of the eel.

Some species of moray eel, mainly the Snowflake and Zebra Moray Eels, have crushing teeth. They prey mostly on crustaceans, sea urchins, and mollusks instead of fish and other softer animals.

Moray Eels come in a wide array of sizes, with some species like the Giant Moray (Gymnothorax javanicus) exceeding 9 feet in length and 66lbs as adults! And then there’s the 14 foot Slender Moray Eel (Strophidon sathete) that was found at an estuary in Queensland…

Naturally, the most common aquarium species are some of the smallest. Many don’t grow much larger than 18 inches. But even the smaller Morays need aquariums at least 55 gallons in size or larger.

They are also predators with healthy appetites (except for the notoriously picky Ribbon Eel). Since they tend to eat frequently and have hefty, nitrogen-packed poop, a sturdy canister filter is required for an eel aquarium.

Otherwise, ammonia and other nitrogen byproducts tend to accumulate, which negatively impact water quality. Moray Eels are rather sensitive to ammonia and nitrate. They thrive in standard marine conditions: temperatures should sit at 74-80°F and they need a pH of 7.9-8.4. Lastly, the specific gravity (salinity) should be between 1.020-1.025.

Aquascaping is an important aspect to keeping saltwater aquarium eels because they need a lot of cover. In the wild, Moray Eels typically poke out just their heads or up to ½ of their bodies, waiting for prey to get too close. The rest of their body is usually left in their chosen cave that the eel can retreat back into if necessary.

That said, they rarely retreat unless sorely provoked. Moray Eels are some of the most aggressive and territorial fish in the ocean world. While they don’t go out of their way to molest fish they can’t eat, anything trying to enter their tunnel is going to have a very bad time.

This means choosing tank mates that spend most of their time in the open water or providing enough hiding places for other cave dwellers. But avoid other long, thin fish, like Engineer Gobies, as they will be an easy meal for a hungry Moray unless they are nearly identical in size.

Moray Eels can often live together, even different species. But you absolutely must pay attention to their size because a larger eel will often try swallowing a smaller eel. Their stomach capacity is massive and even an eel half their size can be eventually eaten. So don’t risk keeping smaller eels with them.

There are dozens of moray eel species in the wild. But these are the 7 species of saltwater aquarium eel you’re most likely to find in stores.

If you’re looking to add a saltwater eel to your tank, a Snowflake Eel is almost certainly your best bet!

Snowflake Eels are unusual for saltwater aquarium eels because they feed mostly on invertebrates rather than fish. Shrimp, crabs, and mollusks like clams are their favorite food. Fortunately, they are eager eaters and some of the least likely eels to go on a hunger strike.

When feeding them, you can offer them shrimp, squid, and other formerly frozen shellfish options from your local grocery store. They may still try to swallow smaller tank mates but you have a much better shot of keeping Snowflake Moray Eels with bite sized fish since they prefer eating crustaceans. 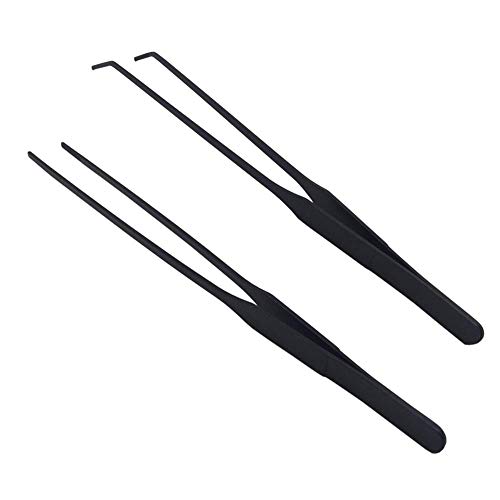 Snowflake Moray Eels are popular to train for hand feeding as they aren’t quite so snap-happy as larger eels. That said, you should still start with feeding tongs and remain careful because their teeth can easily break skin.

They are very common in the hobby and inexpensive to purchase. They are also a very small species, rarely growing beyond 24 inches in length. This makes the Snowflake Moray Eel an ideal species for beginners looking for their first saltwater aquarium eel!

First and foremost, we need to talk about the Ribbon Eel because they are by far the strangest members of the family. These eels have been known to exceed 4 feet in the wild but typically grow 3-4 feet in the aquarium.

While they are extremely long they have far less biomass than even other ees of this length. Since body mass has a greater impact on aquarium carrying capacity than length, 55-75 gallon tanks offer plenty of space for these mostly sedentary fish.

Ribbon Eels are very difficult eels to keep because they are infamously unwilling to eat in aquariums. They eat brightly colored reef fish in nature so acclimating them to drab, frozen silversides and other standard fare often proves impossible. That said, I cover several ways on how to encourage these eels to eat should you decide to try one.

Ribbon Eels are also intensely social and thrive when kept in small groups. Despite the expense it’s often the best way to succeed with these gorgeous yet challenging saltwater aquarium els.

As one of the smallest commonly available saltwater aquarium eels, the Golden Dwarf Moray Eel is a great place to begin! They are on the pricier side but make up for it in ease of care and size. They rarely grow beyond 12 inches, making them ideal for aquariums as small as 55 gallons.

Occasionally, you’ll see baby specimens of other species, such as the Canary Moray (Gymnothorax miliaris) sold as Golden Dwarf Morays. But these eels always grow much larger. The best way to pick out a Golden Dwarf is to look for blue eyes with a vertical dark bar running through the iris. No other species has these traits.

Their small size also makes it easier to keep them alongside traditional community fish like Tangs, Angelfish, Lionfish, and other deep-bodied fish. But they have no problem trying to eat Clownfish, Damselfish, saltwater shrimp, and other prey items so beware their predatory habits.

As small as they are, Golden Dwarf Morays are highly capable escape artists that will leave their caves at night to free swim and test the lid of the tank. If you don’t want a surprise on the floor in the morning, make sure all holes are properly sealed and heavy enough to not be pushed from below.

Japanese Dragon Eels are often seen as the apex of the saltwater aquarium eel world. These predators aren’t especially large but they have a stunning marbled red and white pattern. Their jaws are delicately curved, with showy needle-sharp teeth that stand out readily. Combined with the delicate arches above their eyes it’s easy to see how they came to be called Dragon Eels.

Despite their fearsome appearance Japanese Dragon Eels aren’t especially aggressive towards tank mates they can’t swallow. They are still territorial and won’t tolerate other fish trying to share their cave. But they often get along just fine with oher Dragon Eels of a similar size.

These eels are extremely expensive, with medium to large adults running anywhere from $600-1200 dollars apiece! Once added to the tank they may go on hunger strike for several days, as Moray Eels often do. But Dragon Eels tend to acclimate well to new environments and eat with gusto afterwards.

Beware their poor eyesight, however. They are incredibly aggressive feeders willing to leave the water when they sense you’re around. Some aquarists hand feed their eels but this is a recipe for bitten fingers with a Japanese Dragon Eel…

The Tessellated Moray Eel goes by several names but is one of the most striking species. It’s also one of the largest of the commonly available saltwater aquarium eels, reaching 4-5 feet easily. This necessitates an aquarium that’s at a bare minimum 180 gallons and some heavy duty filtration!

Tessellated Moray Eels often go through a hunger strike when first introduced but one you encourage them to begin eating they are very hardy and easy to care for. They can be a fairly aggressive species as well so be mindful of their tank mates. Tessellated Eels often work best as solo fish for their tank alongside a few cleaner shrimp (Lysmata sp.) to pick at their skin and teeth.

The White or Ghost Ribbon Eel is a fascinating alternative to the more colorful but difficult RIbbon Eel mentioned earlier. White Ribbon Eels are paler in color but very similar in form, with an extraordinarily long tail that looks like a kite in the wind.

That said, you’ll rarely see them free swimming as they tend to be entirely nocturnal. That said, once you have them acclimated and eating they can be coaxed into feeding during the day. But a dark quarantine tank is the best way to get them eating at first.

White Ribbon Eels are easier to feed than other Ribbon Eels but can still be quite challenging when first introduced. Offering them chunks of fresh shellfish soaked in garlic seems to be the most reliable way to get them eating.The powerful but appetite-stimulating aroma of garlic triggers their feeding response reliably. But even then the White Ribbon Eel may go on occasional hunger strikes for no discernable reason.

The Zebra Moray Eel is another fairly large saltwater aquarium eel, growing up to 5 feet long. This eel, alongside the Snowflake Moray, has crushing teeth designed to crunch through the shells of invertebrates like sea urchins, clams, and crabs. Therefore they respond much more readily to shellfish like shrimp and squid over fish.

Watching them feed on larger crustaceans can be an impressive hunting display. They will attempt to wrap themselves around large crabs and lobsters, preventing their escape. Then, one by one, they will break off, crunch, and devour the limbs before cracking into the main body.

It goes without saying that they should not be kept with snails, clams, crabs, shrimp, and other invertebrates. Cleaner Shrimp are usually safe if they are added to the tank prior to the eel but even then, not always.