Sparkling Gourami fish often get overlooked in many pet stores. Small, seemingly a dull brown, and shy, they are far less interesting looking than Neon Tetras, Guppies, and other common favorites.

As a result, finding a PetCo Sparkling Gourami is not very easy to do since they aren’t as quick to appeal. You will likely need to look around in a specialty aquarium store to find some.

Sparkle Gouramis are the smallest of the family Osphronemidae. A few, including the Giant Gourami (Osphronemus goramy) can reach massive sizes in excess of two feet. Sparkling Gourami, on the other hand, don’t grow much beyond 1 inch in length.

Sparkling gourami size places them solidly within the category of “nano fish:” fish well suited to freshwater aquariums 3 to 5 gallons in size. They do well in species only set ups or alongside other fish.

They may look delicate but it is not too difficult to care for Sparkle Gouramis. Just be aware that they are quite shy and do well in heavily planted aquariums and they may even breed for you.

If you are looking for small yet colorful and active aquarium fish then there are few better choices here. The maximum size of Dwarf Sparkling Gourami fish is 1 to 1½ inches. Most will be closer to 1 inch as an adult, which means even a small group can live in a desktop aquarium with ease.

Sparkling Gouramis are true nano fish, meaning they can live well in aquariums as small as 3-5 gallons. You will likely not have room for much else. Maybe 1 male, 2 females, and a few dwarf shrimp for friends.

However a warm, heavily planted nano tank is a perfect home for them. You can keep them in larger aquariums, of course. Just make sure that it’s well planted and stocked with appropriate tank mates (see below).

If you intend on keeping multiple males, I recommend at least 10 gallons of space per male. They are quite territorial and will fight all of the time if you keep more than one in a small tank.

Sparkling Gouramis almost never kill one another. However, it’s very stressful for a male to not be able to escape a stronger rival. He will get chased every time he’s spotted, which is constantly in a nano aquarium.

Like most Southeast Asian natives, Sparkle Gouramis prefer soft, acidic to neutral water conditions (pH 5.5-7.0). They may do well in alkaline environments (pH 7.0+) but their color is lessened and they are very unlikely to breed. The live plants they love also tend to prefer acidic water conditions.

You should also keep them in tropical temperatures (75-80°F) – the warmer, the better. And if you’re looking to spawn them, increase the temperatures even higher to simulate the hot summers of the region.

While not super-sensitive to poor water quality, ammonia, nitrite, and nitrate should be kept as close to 0ppm as possible. Fortunately, live plants also help with this by consuming these chemicals as fertilizer.

Live plants are very important to Sparkling Gourami care. In fact, I’d go so far as to say you will have a much harder time keeping them without some plants in the aquarium.

Live plants thrive in the same conditions as Sparkling Gouramis. They create shelter to help them feel secure, provide habitats for tiny invertebrates to eat, and give your Gouramis a place to breed. 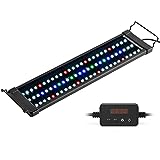 So long as you stick to fish as tiny as they are, finding tank mates is an easy part of Sparkling Gourami care. They tend to squabble with each other. However they will ignore just about any other fish.

In fact, Sparkling Gouramis are quite shy. So don’t house them with “large,” active fish like Tiger Barbs. They will intimidate them just by dashing about all of the time. Choose Guppies, small Tetras, and other peaceful similarly sized fish.

Sparkling Gouramis are also one of the best tank mates for Red Cherry and other Dwarf Shrimp. These invertebrates can be hard to keep with fish because they are both tiny and delicious.

Your Sparkling Gouramis may eat a baby shrimp or two. But Cherry Shrimp have so many young and they grow so fast that they won’t be able to eat them all in a well planted tank.

What do Sparkling Gouramis Eat?

Sparkling Gouramis are what you call micro predators. This means that while tiny, they feed just on animal protein. Daphnia, blood worms, mosquito larvae, and other small invertebrates are what they mostly eat in nature.

Fortunately, all of these are very easy to find at your local pet store. Live or frozen, invertebrates are the best way to get good color and breeding behavior from your Gouramis. 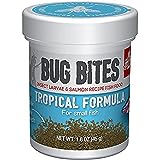 However, Sparkling Gouramis will also eat micro pellets, flake food, and other prepared items. Just be sure to choose a food that’s high in animal protein rather than vegetable-based fillers, like most brands.

Most members of the Gourami family are territorial and aggressive towards one another, and Sparkle Gouramis are no exception. They flare their fins and gills at rivals and maintain strict territories.

Males may sometimes kill each other if things can’t be settled through displays but this is rare even in nano aquariums.  In fact, they and their fellow members of the genus Trichopsis have a unique way of settling their disputes.

Rather than biting, Sparkling Gouramis use their pelvic fins to create sound. They talk to one another. They drum their fins in a fashion similar to a guitar string being plucked, rapid-fire.

Another of their relatives goes by the name Croaking Gourami (Trichopsis vittata) as a result. However, Sparkling Gouramis create this sound just as often. Many new aquarists spend hours trying to figure out where the source of these mysterious sounds lie without realizing that their new fish can talk.

Typically they croak when interacting with one another. Females also produce a lower “purr” to initiate spawning.

How to Sex Sparkling Gouramis

Males also spend much more time displaying and fighting with one another. Females are much more amicable and spend most of their time foraging for food among the plants and avoiding amorous males.

Sparkling Gouramis are very easy to breed. All you need to do is provide them with the right conditions: very warm, still waters, thick beds of live plants, and the right foods.

By gorging themselves on mosquito larvae and other tiny invertebrates the females begin to swell with eggs. Meanwhile the males are busily fighting one another for prime real estate among thickets of Cabomba and other weedy pond plants.

Once a good space has been secured he begins constructing a bubble best just like Bettas do. He weaves these bubbles among plants to keep it from floating away. That’s why providing plants encourages your Sparkling Gouramis to spawn.

He collects the eggs and spits them into the nest, where they develop over the course of 24-48 hours. The fry are very tiny and too small to eat brine shrimp nauplii.

Instead, they will eat infusoria in the water column for about a week after they absorb their yolk sac. Eventually, they graduate to powdered flakes, micro worms, brine shrimp nauplii and other tiny items until the male releases them from the nest.

Once the fry are all grown up, you will have an easy time placing them into new homes. Finding Sparkling Gourami for sale is never easy and these little fish are always in high demand.

Sparkle Gouramis offer a unique challenge to fish keepers looking for something a little different but not too difficult. These fish are bold and beautiful once they settle into a new home. And you might even get to experience what it is like to have fish that talk to you. So give the Pygmy Sparkling Gourami a try and see if they don’t spice up your nano aquarium just the way you are hoping for.

Interested in learning more about these unique nano fish? In that case, let’s talk a little bit longer about what makes Sparkling Gourami so interesting.

They are peaceful towards other fish but Sparkling Gourami fish can be aggressive towards each other. Males will fight little bouts but they are mostly display-only and end quickly. They rarely do any lasting harm to each other, even in a small aquarium.

How Many Sparkling Gouramis Should be Kept Together?

It is best to keep a trio of Sparkling Gouramis together. If possible try to get 1 adult male with 2 adult females. Two males may fight often. And keeping a single female with a male can cause her stress if he decides he is ready to breed but she is not.

How Big Do Sparkling Gouramis Get?

Sparkling gouramis are quite small and rarely grow much larger than an inch in length. Their maximum size is 1½ inches.

Sparkle Gourami can live alone but they do better when they have members of their own kind to interact with. But keeping a single gourami in a well planted tank with other community fish is also very safe to do.

Everything You Need to Know About Fantail Goldfish
Guppy Fish Care Guide: Appearance, Diet, and More