Are you looking at worms in your fish tank? Yuck! Worms aren’t something we expect to find when we start watching our fish. While not all worms are a problem it’s still worth figuring out how and why they got there. Let’s start by identifying exactly what kind of worms you have!

Types of Worms in Fish Tanks

Worms sound like they would be a problem regardless of the type you have. However, many types of aquatic worms are neutral or even beneficial to your aquarium ecosystem.

Christmas Tree worms are often found on corals and live rock. These harmless, beautiful hitchhikers add character to any reef aquarium. Here, we will focus on the worms aquarists rarely go out of their way to buy.

If you’re a fan of offering live food to your freshwater fish there’s a chance you’ve purchased Tubifex or Blackworms before. Both are a type of detritus-loving annelid, or segmented worms, similar to the common Earthworm.

And in aquatic environments they occupy a similar niche: they live on and within the substrate. Both prefer sand and mud to gravel but will make do with wherever they find themselves.

Fortunately for your fish, both types are both harmless and nutritious. Being relatively high in fat, you shouldn’t feed worms often but as an occasional treat they are great!

The same holds true for related detritus worms, which are usually much smaller and a pale yellow or white. They are feeding on your fish’s leftovers and spend nearly all of their time in the gravel.

All detritus worms are harmless in small numbers and even provide food for your fish!

But they are also a sign that you may have too much decaying organic debris in the substrate. Remember, their favorite habitat is muddy rivers and lake beds full of rotting matter.

Leeches are fairly rare in aquariums but not impossible to find. The most common ways to get leeches in your tank are through live plants grown outdoors, live food (they may be hidden in masses of Tubifex worms), and wild-caught fish.

These parasites specialize in attaching to fish, turtles, and other aquatic animals and sucking blood. Leeches eventually drop off once full but their wounds can be real problems. For one, their saliva acts as an anticoagulant, preventing blood from clotting properly.

Fish don’t have much blood to begin with and a leech attack can be severely weakening or fatal to a small fish. The wounds are also perfect places for infectious bacteria and fungi to enter and cause even more harm to the weakened fish.

Unlike detritus worms, flatworms (planaria) are active carnivores or scavengers or recently dead organisms. You may notice them for the first time sliding along the aquarium glass like a slug or congregating around a dead fish.

Flatworms often find their way into an aquarium by hitchhiking on rocks, plants, or with live food additions. They are mostly harmless since they are far too small to affect adult fish. However they can attack fish eggs, newly hatched fry, and fish already severely weakened and lying on the substrate.

Getting rid of them can be a bit challenging because flatworms have some of the most incredible regeneration ability in the animal kingdom! If you crush or chop them up into pieces, each piece will regrow into a new flatworm! So whatever you do, don’t try to use physical means to get rid of planaria.

Flukes are specialized worms that live on the gills, fins, and skin or affected fish while intestinal worms live…Guess where? There’s a decent chance your fish have at least a few of either type, especially if you own wild-caught fish and didn’t medicate them in a quarantine tank first.

Predatory fish like Stingrays are especially prone to getting intestinal parasites from the prey that they eat. Flukes are usually microscopic and hard to identify. However as their numbers grow into problem levels, fish will grow visibly thick coatings of mucus to fend off the irritation.

They begin flitting about, scratching their sides on hard surfaces, their gills may become inflamed, and they may even bruise themselves in their efforts to scratch the constant itching.

If your fish are infected with a large number of intestinal worms, they will begin to visibly lose weight. Their appetite may be healthy, even ravenous. Or they may stop eating altogether from the stress of the infection.

While they look the part, anchor worms aren’t true worms. They are actually a parasitic type of crustacean, making them cousins to crabs, shrimp, and lobsters!

Anchor worms are much more common on fish recently imported from large fish farms and wild-caught fish. They are fairly large, especially once they begin producing eggs, which form white streamers that are very obvious.

This makes identifying and removing them very easy compared to other fish parasites. Unless your fish have a huge infection, which is rare, simply net your fish and place them in a small container with aquarium water. 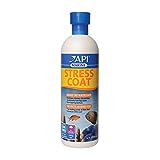 You can then use tweezers to manually remove each anchor worm. Once finished, a bit of Stress Coat added to the aquarium will stimulate healthy slime coat production, which seals the wound and promotes healing!

Bristle worms are true annelid worms, just like tubifex and earthworms. They are saltwater detritus worms and feed on decaying matter that fish tend to miss in deep crevices. Bristle worms usually as hitchhikers on uncured live rock or within live sand bags.

Bristle worms are something of a heated debate in the saltwater community. On the one hand, they can form an essential part of your saltwater clean up crew. Much like snails and hermit crabs, they eat up organic matter before it contributes to raising ammonia levels.

On the other hand, their festive, poisonous bristles are a hassle. They can sting an unwary hobbyist reaching under a rock or a curious fish that decides to have a taste. While no more than a nuisance to us and rarely fatal to fish it’s still a very painful experience

Here is everything you should know about preventing and getting rid of fish tank worms:

As always, prevention is the best medicine! Inspect all incoming live plants, wet driftwood, rocks, live food, fish and anything else for signs of worms.

Wild collected driftwood and rocks can be allowed to sun dry or (slowly and at low temperatures) oven treated to sterilize them.

Worm eggs are harder to find and difficult to kill. But if you suspect that they may be there due to the growing conditions of the plants, a 24 hour bath in a potassium permanganate solution can kill many eggs and adult worms.

Physical worm removal is usually the hardest, least efficient way unless you’re dealing with larger bristle worms, leeches, or anchor worms. These worms don’t tend to form massive colonies so removing any that you see can lead to extermination.

We already discussed how to remove anchor worms. To remove an attached leech, one should use a thin, flat surface such as a credit card, finger nail, or dull knife. Slide the object along the skin of your fish to detach the mouth and tail sucker of the leech.

Never grab onto and pull a leech as they may disgorge their stomach contents back into the wound, causing infections. Also never attempt to physically remove a leech attached to the mouth, gills, eyes, or other vulnerable parts of a fish. 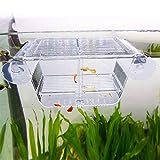 You can easily cause even more damage to your fish that way. Either wait for it to drop off on its own or use chemical treatments. Removing a fish with a leech to a quarantine or breeder box ensures the leech doesn’t simply disappear into the substrate when you aren’t looking.

If dealing with detritus worms, you need to discern where their food source is coming from. They live in organic-rich substrates. Are you overfeeding? Not performing frequent water changes? Not enough filtration?

Changing your maintenance routine will cause their numbers to drop.

Chemical removal is by far the most efficient way to deal with a worm infestation because it often only takes a few that escape for the problem to arise again. Worms that form huge colonies can often be nearly impossible to get rid of.

Prazipro is by far the best broad spectrum worm killer. It’s actually used on livestock and humans as well! What’s great about it is that it targets specifically worms so you don’t need to quarantine infected fish or remove anything.

Even sensitive invertebrates like shrimp and corals are unaffected by it. However it can reduce oxygen levels in an aquarium so provide supplemental aeration when using it.

Just be careful when using chemical means because if you can’t remove the dead worms they will rapidly decay. This decay will result in a huge ammonia and protein spike that may severely impact your water quality.

Worms in your fish tank need not be a source of despair. Some worms, such as most detritus worms, are harmless and even beneficial in small numbers. But some of the other worms indicate real problems that need to be dealt with.

Fortunately, worms are easy to physically remove. And even easier to deal with using modern fish-safe medicines. Just remember to closely inspect all incoming aquarium items in the future. Or change your maintenance routines so worms can no longer thrive in your tank!