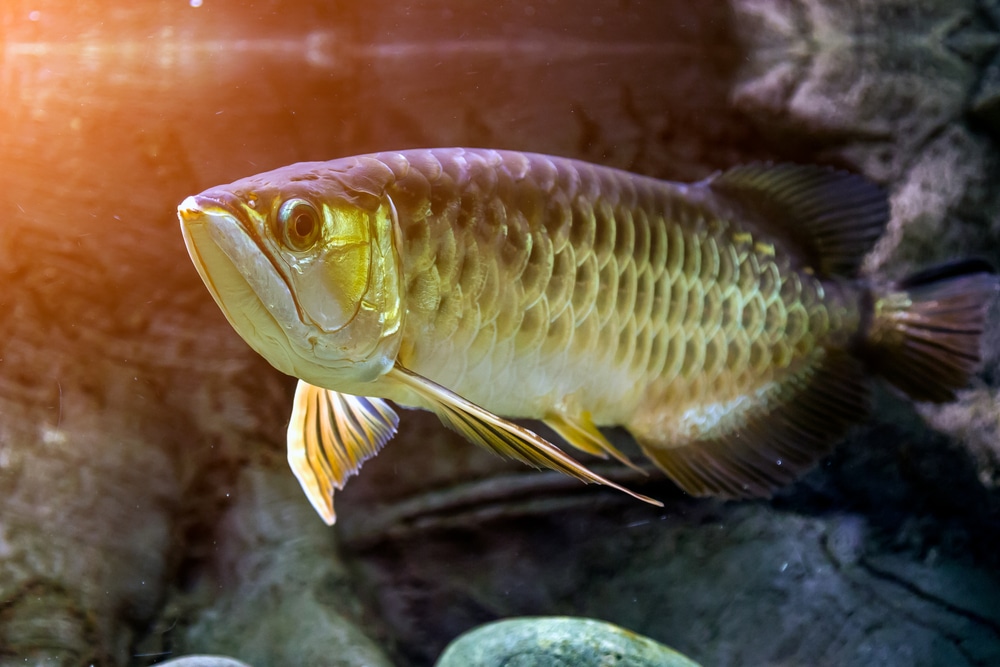 Arowanas can be difficult to find tank mates for. They outgrow most fish eventually and will gladly make a meal out of their former neighbors. Take a look at these 10 fish that will keep up with your Arowana in size throughout its life!

Here are 10 of our favorite Arowana tank mates that you should consider:

Clown Loaches are ideal bottom dwelling tank mates for Arowanas because they are active, large, and colorful. Many people don’t realize that they prefer being kept in schools.

Unfortunately, they are usually sold as 2-3 inch juveniles, which will eventually outgrow all but the largest of aquariums. Since Arowanas also get massive they do well together. Arowanas hang out at the very surface so they rarely interact with their peaceful neighbors.

Clown Loaches are very unpicky when it comes to water conditions and feeding but they love invertebrates like brine shrimp and worms. Since both species are found in Southeast Asia they prefer a softer pH (6.0-7.0) and elevated temperatures (76-84F)

Like the hundreds of Asian Arowana varieties, Flowerhorn Cichlids are the result of intensive selective breeding. The resulting fish are gorgeous status symbols for Asian businessmen and large, personable pets for people all over the world.

Many Flowerhorns have patterns that resemble Chinese characters, which drives up the price. Others have colorful red nuchal humps on their heads, flowing fins, and other features inherited from Red Devils, Trimacs, and even Texas Cichlids.

The only thing to watch out for is their temper. Being a cross between several Central American species, Flowerhorns can be quite aggressive and it’s hard to gauge how mean they’ll be until they’re adults.

When kept in aquariums of 75+ gallons they usually have more than enough space for their own territory. However you may get the occasional nasty male that’s intolerant towards most of his tank mates.

Since Arowanas have large appetites and larger mouths you can’t rely on Tetras and other dither fish to keep them company for long! Instead, you’ll need larger schooling fish like Silver Dollars.

These large vegetarians are related to both Neon Tetras and Piranhas. Spotted Silver Dollars and Red Hook have a bit more color than the other species but all are metallic silver and beautiful as a group.

If you have a planted aquarium for your Arowana Silver Dollars won’t work so well because these fish are like goats when it comes to vegetation.

They will eat all of it, even tough, bitter plants like Anubias and Java Fern. Stick to plastic decor and offer them plenty of blanched vegetables and Spirulina flakes!

Oscars have been an aquarium trade staple for a very long time. They are impressively large, not too aggressive, and have an endearing personality. Oscars can be trained to eat from your fingers and some even enjoy being petted by their keepers!

Oscars come in a variety of colors, including Red, Tiger, and Albino. They grow fast enough to keep pace with your Arowana and both are carnivores that appreciate a good variety of fresh, frozen, and prepared meaty items.

They are also especially long lived and can reach 15-20 years of age in the right conditions!

If you enjoy the sinuous form of your surface-dwelling Arowana the Black Ghost Knifefish is a bottom dweller that shares its snake-like appearance.

While they do get fairly large Black Ghosts are a rather shy, mostly nocturnal fish. They need a hideaway to call their own: most prefer a PVC or plastic pipe so they feel protected along their entire body. Likely the piping also blocks some of the electrical stimulation they’re constantly picking up on.

These Knifefish are true electric fish. While they can’t shock their prey they can detect nearby animals and objects in complete darkness and even “talk” to one another through electrical signaling!

Black Ghost Knifefish prefer small fish and meaty items like earthworms and bloodworms as food. They can be trained on prepared food but most are wild caught and have a hard time recognizing it as food.

Freshwater Stingrays are another group of intriguingly shaped bottom dwellers that get along well with Arowanas. Stingrays are also predators and are even more ravenous than Arowanas – they need huge amounts of fresh shrimp, clams, fish, and other food items to fuel a very rapid metabolism.

Stingrays are close cousins to Sharks and other fish with cartilaginous (boneless) skeletons. They can also sense electricity to find buried prey like clams and insect larvae.

When keeping them with Arowanas you’ll need very heavy duty filtration to manage their messy eating habits and large feces. Stingrays are especially sensitive to ammonia, nitrite, and nitrate and will eventually die if these toxic compounds build up.

The Red Tail Catfish is one of the largest commonly found fish in the hobby. Originally from South America, they are closely related to the much smaller Pictus Catfish and other fast-swimming predatory cats.

If you buy both a Red Tail Catfish and an Arowana when young you’ll need to carefully watch your Arowana to ensure it’s growth keeps pace with your Catfish. Both species grow quickly but Red Tail Catfish have very large mouths and grow just a little longer than most Arowanas.

If your Arowana doesn’t keep up it could be an expensive meal for a large adult Catfish! However in most cases an Arowana is much too large; feeder Goldfish, fresh shrimp, and other items are perfect for your Catfish. 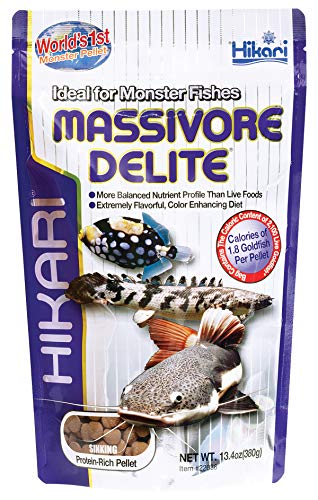 As large predators they should also be given prepared formulas with the right balance of protein and calories. Hikari’s Massivore Delite is perfect for Red Tail Cats, Arowanas, and other predators because it’s made with mostly meat with a few nutrition-boosting enhancements.

Severums are a fairly peaceful medium-sized Cichlid too large for an Arowana to eat, making them perfect tank mates. They have a subdued yet attractive banded pattern and typically hang out in the midwater and bottom regions of the aquarium.

Like most cichlids Severums are intelligent and trainable: they will eat from your fingers and many will recognize their keepers and make aggressive displays towards strangers.

Their aggression ramps up when breeding but they are otherwise ideal community tank residents in large fish displays!

Green Terrors are excellent tank mates for Arowanas because their bright green hues contrast very nicely with the silver, red, and yellow tones of most Arowana species.

Despite their name they aren’t as mean as some of their cousins from Central America or Africa. Green Terrors are semi-aggressive at best but they do live up to their names when breeding.

Green Terrors do like to dig and rearrange aquascapes, however, especially males that have established a territory. Even hardy plants like Java Fern may get shredded if your Green Terror decides he’s not fond of them.

Spiny Eels are wonderful tank mates for Arowanas and other large fish because they keep to themselves along the bottom. However once they smell food with their sensitive noses they dart all over the place hunting for their fair share.

Fire Eels are the largest species commonly available, reaching up to 3 feet long. They are intelligent and interactive: they can be trained to eat from feeding tongs or even your fingers!

Earthworms, fresh shrimp, and other invertebrates are their favorite food. But smaller fish will also be eaten, typically at night while they’re sleeping. Spiny Eels as a group love to dig and should be given a sandy substrate deep enough for them to submerge themselves entirely.

While they are peaceful towards fish too large to eat Fire Eels are intolerant of their own kind or other Spiny Eels. They can also be territorial if other bottom dwellers try to force them from their favorite hiding spot.