Beginner reef keepers are regularly told that soft corals are the best choice for them and to stay away from any sort of hard coral, especially SPS (soft polyp stony) corals. But there are a few stony corals that are adaptable and beginner-friendly. So long as you’re ready to monitor their water chemistry carefully, Cyphastrea is a great place to begin your journey into the wonderful world of stony corals!

Getting to Know Cyphastrea Coral

Cyphastrea is a genus of about 10 different species that are found throughout the IndoPacific region, from the Red Sea and East Africa all the way to Australia and the Philippines. They are extremely popular with reef keepers of all skill levels thanks to their stunningly diverse colors and ease of care.

Even for corals, Cyphastrea are variable, with strains combining lime greens, vibrant blues, reds, browns, purples, and other tones in ways that would allow you to fill a tank solely with this coral type!

Cyphastrea is a genus of true encrusting coral; only one species, the Lesser Knob Coral (Cyphastrea decadia) will form axial and radial branching colonies. Cyphastrea can also see plate forms on occasion but the encrusting variety is by far the most common. And by encrusting, I mean that it forms a creeping colony that takes the shape of a piece of live rock or other substrate. So when growing Cyphastrea, you need to take the shape of the substrate that you place it on into account since it will mold itself to fit.

As a low light coral they don’t need nearly as intense of a setup as many other species of coral. And they actually prefer at least moderate levels of nutrient concentrations, further adding to their appeal among beginning reef keepers who struggle to maintain their parameters “pure” enough for more difficult stony corals.

In short, Cyphastrea has a lot to offer reef keepers of all skill levels! So let’s dive into caring for these encrusting wonders!

Cyphastrea Corals thrive in the same conditions as other coral species. We want to provide them with a temperature range of 72-78℉, common to the IndoPacific region they call home. The pH should remain constant between 8.0-8.24. And the specific gravity (salinity) should remain around 1.023-1.025.

You will also need to track the parameters of several dissolved mineral compounds and elemental ions that are essential for stony coral (and to a lesser degree, soft coral) growth. Calcium, magnesium, and strontium are the major elements to track in a reef aquarium. And as a measure of the buffering capacity of your aquarium water (its resistance to pH fluctuations) alkalinity is also important to keep track of.

We need to keep a careful eye on all of these parameters because they actually influence one another. A drop in one may affect the bioavailability of another element – or cause it to precipitate out of solution!

The major elements listed above are all taken up by stony and soft corals for use in their skeletons and/or structural spicules. And given how fast Cyphastrea grows it can deplete these elements faster than you might expect, especially when paired with other fast growing corals. 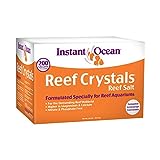 Any marine aquarium salt blend includes seawater standard levels of these elements but reef aquarium salt tends to have elevated levels to meet the demands of stony corals. Interestingly, an alkalinity of 9-12 dKh is recommended for the same reason; even though it’s higher than the seawater standard of 7-8 dKh, the extra buffering capacity seems to foster better coral growth.

Being one of the easiest stony corals for beginners, Cyphastrea Coral is more flexible than most. It does require standard reef parameters but it well tolerates both low and higher levels of nutrients like phosphate and nitrate. Remember that both of these chemicals, while often thought of as pollutants, are actually vital nutrients for all corals. Their zooxanthellae, in particular, require both for proper growth and division.

Cyphastrea can grow in very low nutrient reef systems but tend to become pale in appearance and their growth rate starts to slow down. Nutrient levels that are too high may cause it to take on an unsightly brown appearance as its zooxanthellae grow robustly within its cells.

Low levels of nitrate are ideal; around 5 to 10 parts per million and phosphate levels of 0.01 to 005 ppm. Any higher and algae tends to become an issue given the light intensity of most reef tanks. That said, you should have a diverse saltwater clean up crew that includes algae eaters like lawnmower blennies and cerith snails to keep any blooms from becoming an infestation.

Lastly, we want to provide moderate levels of flow for these corals but indirectly. Cyphastrea needs a bit of current to prevent mucus and debris from accumulating on its surface. But too high of a flow can also cause it to retract, as can too much light (see below). Since Cyphastrea have a weak grasp and are rather slow feeders, you’ll need to shut off the indirect flow you provide them, otherwise they will find it impossible to eat.

Cyphastrea is more of a low light coral species and doesn’t care to be placed directly into intense conditions like elegance coral, Bali green slimer, or other light-hungry species. A PAR (photosynthetically active radiation) light rating of 100 or less is sufficient for Cyphastrea. It can be kept in more brightly lit conditions but it needs time to adapt. And unfortunately this coral tends to adapt rather slowly, making it easy to accidentally burn it or cause enough stress for the coral polyps to retract into themselves.

On the “bright” side, this makes them ideal, colorful residents for low light coral communities, which might include toadstool leather coral and corallimorphs (mushroom corals). Being a low light coral, nutrition is more important for Cyphastrea than corals that can survive solely off of their zooxanthellae.

Cyphastrea is a fairly aggressive coral in terms of both growth rate but not in its ability to wage warfare with anything other than corals its right next to. Cyphastrea do have sweeper tentacles that are extended at night to feed and sting encroaching neighbors. But these have a very short reach compared to more aggressive corals like acan lords and frogspawn corals, both of which can sting from as much as half a foot away from themselves.

Still, their aggressive way of growing into the space on other corals makes them a threat to more peaceful coral species like many other SPS corals. Mobile species like ricordea mushrooms will simply move out of the way, making them good tank mate choices for Cyphastrea. You can also try keeping them with more aggressive species like those listed above, as well as elegance corals and most Euphyllia sp. since these corals have potent enough sweepers to keep Cyphastrea from growing over them.

Cyphastrea can also be kept with any reef safe fish and invertebrates. Fish options include tangs, clownfish, damselfish, gobies, blennies, cleaner wrasses, pygmy angelfish such as the flame and coral beauty, and basslets, just to name a few! Reef safe invertebrates like giant clams, shrimp, snails, and hermit crabs are all excellent companions as well!

Cyphastrea Coral tends to be a good feeder to make up for its lower light requirements. Corals in general actually use several feeding strategies. In addition to eating zooplankton and other tiny organisms, Cyphastrea also consumes the sugars and other nutrients that its symbiotic zooxanthellae provide for it. The zooxanthellae and coral are a classic example of symbiosis in nature, where two organisms evolve together and provide for each other in close proximity.

Cyphastrea can also consume nutrients directly from the water column, including nitrate and organic molecules. Keeping these corals with fish and invertebrates provides them with a slow trickle of organic matter – but you can also supplement their diet with amino acid boosters that help fuel their growth. And as fast growing corals, Cyphastrea definitely appreciates the additives.

When feeding them directly you’ll want to turn off the flow of water that reaches them because Cyphastrea have stubby tentacles and can’t pluck food particles from a strong flow. They won’t eat a ton so only give them a light dusting of food when target feeding. Excess food will go to waste if it’s not consumed by your reef tank inhabitants. And once it starts to rot it will cause ammonia levels to rise, potentially stressing your aquarium inhabitants.

Cyphastrea are hermaphroditic stony corals, meaning they have both male and female organs in the same colony. In the wild, corals time their mass spawning to coincide with the phases of the moon and the tides. They then release massive quantities of eggs and sperm into the water column, which mix and eventually form planktonic larvae called planula. These planula drift with the currents, feeding on and being eaten by other zooplankton until they settle back into the reef and form new colonies.

Since it’s fairly difficult to simulate the tides and phases of the moon in a home aquarium, most reef keepers rely on coral “fragging” instead. If you’ve ever bought a coral “frag” you’ve already seen the end result of this process. Essentially this involves splitting the coral into several fragments. As simple animals, most corals can regenerate if split into pieces, forming clones of the original colony that will simply continue growing!

Corals can be fragged using a variety of techniques that mostly depend on the growth form and regeneration ability of a type of coral. For Cyphastrea, a band saw is the best way, cutting through both its encrusting growth and its substrate.

A band saw with water cooling is one of the best tools for fragging Cyphastrea Coral. And if you can, you should mix iodine into the coolant water. This way, the wounds you create are immediately treated with iodine, which helps prevent infections from arising until the coral heals from the procedure.

Once you’ve fragged your healthy Cyphastrea colony into several pieces, you can then glue them to ceramic frag disks or chunks of coral or live rock. The new coral frags will need a week or two to heal from what’s clearly a traumatic experience for them. And eventually they will start expanding and growing anew, looking to colonize new space and find new food sources!