Acan Corals are a favorite of reef keepers all over the world. They are compatible with a wide range of coral species, have undemanding (for a Large Polyp Stony coral) care requirements, and are incredibly beautiful.

They do have a few quirks to be aware of. But they can find a place in nearly any beginner or expert reef keeper’s tank!

What is Acan Coral?

One of the most attractive aspects to Acan Corals is the diversity of colors they can display. Individual Acans can show off red, green, purple, and blue tones despite being the same species under the same lighting! Their colors order on outrageous and they are perfect for a splash of tonality somewhere more light-hungry corals can’t grow.

When hunting for information about Acan Corals you should search under both of the scientific names presented. Coral taxonomy is a dusty subject but it’s worth understanding in the case of the Acan.

In 2016, a study was done using the DNA of the Acan Coral and several related species to compare their relative similarity. It was discovered that despite how close to identical it looks, the Acan Coral was much more closely related to others in the genus Micromussa, and was shifted to that genus along with M. multipunctata.

Since the revision was recent, you’ll find them classified as both Acanthastrea and Micromussa. But both names are meant for the Acan Coral.

Acan Corals are an attractive, easy to care for LPS coral. Just be aware of their aggressive tendencies towards other corals and you’ll be just fine!

Aquarium size isn’t super important when it comes to keeping Acan Corals. What’s most important is making sure that there is enough space for your corals to avoid touching one another.

Since Acan Corals are aggressive towards any other coral within their (short) reach, you can keep a smaller Acan in a tank as tiny as 5 gallons so long as the light intensity isn’t too strong for it.

If you’re keeping a coral community tank you may want extra space since Acan Corals prefer being placed in low light regions and are unfriendly towards their neighbors. You can let more peaceful, high light corals dominate the central areas of the tank while the Acan beautifies the corners and tank bottom.

Acan Corals thrive in standard marine water conditions. However stability is very important for nearly all coral species. They should not be the first coral added to a new setup.

Acans do best in aquariums that have been running for around 6 months or more. Mature aquariums have finished the cycling process and aren’t at risk from sudden fluctuations in parameters due to New Tank Syndrome. 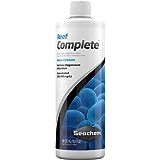 Acan Corals are still LPS and require well managed levels of calcium, magnesium, and other elements used for the construction of their stony skeletons. 350-450ppm ensures that they can continually expand on their skeletons and magnesium in the water column keeps calcium bioavailable.

Water movement is also important to Acan Corals. They prefer a moderate water flow and will also do well in high flow areas. Anything from the outflow of a nearby filter to a powerhead set up to create current will suffice.

This species also loves being fed regularly, making a protein skimmer essential for their tank to keep nitrogenous and organic waste levels low.

Your light intensity should be around 25-50 PAR for Acan Corals, which often means placing them as low in the tank as possible. You can also place them around or under corals that they can’t physically attack but will provide some shade for the Acan.

Another aspect to Acan Coral care is their highly variable coloration. Both the lighting intensity and light type (fluorescent, incandescent, etc) will cause them to express different colors.

So you should spend some time experimenting with your light regime to find a mixture of color and intensity that keeps them, and you, happy. Actinic lighting (color temperature 10,000K+) is especially good at bringing out deeper color tones in Acan Corals.

Just keep in mind that actinic lighting is not especially useful for photosynthesis. It’s used entirely for its aesthetic qualities. You’ll need to combine it with white/yellow lighting (color temperature 6700K) for corals to grow properly. 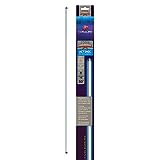 Coral aggression seems like the stuff of science fiction when you start reading about how it works. Most corals are immobile to semi-mobile. However they have a wide variety of physical and chemical defenses and offenses that they employ in the constant battle for living space on the reef.

Several species, including Toadstool Corals (Sarcophyton glaucum), continuously secrete toxic compounds that slow or stop the growth of nearby competitors. Others, including Acan Corals, have long sweeper tentacles that are used offensively as well as to catch prey.

Acan Coral sweeper tentacles usually give the coral about an inch of added reach. But some species, such as Torch Coral (Euphyllia glabrescens) have tentacles that extend out to 6 inches. Sweeper tentacles are usually sent out at night to help the coral snag small fish and shrimp that blunder within reach. But if they come in contact with a neighboring, unrelated coral, they are used offensively to damage and potentially sting to death the competitor.

But Acan Corals have yet another weapon at their disposal: mesenterial filaments. These are probably one of the most disturbing weapons in the animal kingdom and a strange thing to find for a first-time coral keeper.

Essentially, many corals are capable of vomiting up their own digestive tract and “flinging” it at an adversary or meal. Starfish use this feeding strategy when wedging open bivalves. And Acan Corals can do this to literally digest their neighbors if they are sitting within a couple of inches.

Fortunately, Acan Coral aggression is fairly easy to contain compared to other corals. The best way to prevent it is to simply give the coral a few inches of space from any neighbors. That way it can’t lash out with sweeper tentacles or mesenterial filaments.

Acan Corals are semi-aggressive but their aggression isn’t too difficult to manage. They will actively attack neighboring corals within their reach. But any coral beyond 4 inches should be safe from the mesenterial filaments and sweeper tentacles of the Acan. Just beware of the other coral responding with their own attacks, especially chemical attacks from soft corals like Toadstool Leathers.

Some of the best tank mates for Acan Corals are species that aren’t as reliant on light intensity. There are many stony and soft corals that will do well in these environments, including Blasto Coral (Blastomussa sp.) and Mushroom Corals (Actinodiscus sp.).

Since low light corals prefer being fed they are generally more tolerant of elevated nitrates, phosphates, and dissolved organics than high light species. You could even keep an entire tank of low light corals together to avoid having to deal with high end lighting.

Acan Coral are one of the more sensitive corals to nips from fish and invertebrates. A bite can cause a polyp to close up for a long time in response. I recommend only keeping Acan Corals with proven reef-safe fish like Tangs, Clownfish, Firefish, Basslets, Cardinalfish, and the like.

A nice, fleshy Acan may be too tempting for a well-trained but occasionally curious Dwarf Angelfish (Centropyge sp.). Chrysiptera and Chromis sp. Damselfish tend to be peaceful and/or small as well as reef safe. But avoid most of the other kinds of Damselfish.

Acan Coral are compatible with most reef-safe invertebrates as well, including Shrimp, many Starfish, algae-eating Hermit Crabs, and Snails.

Since Acan Coral don’t rely on or need high intensity lighting it’s a fairly aggressive feeder and should be offered food at least once a week. Your coral may not accept any food for the first few days after being introduced into the aquarium. But once it settles in you should see it begin to extend its tentacle hoping for a treat to waft by.

Acan Corals are carnivorous, feeding on tiny fish and invertebrates that blunder into their grasp in nature. You can therefore feed your coral chopped mysis shrimp, brine shrimp, and other tiny thawed food.

Prepared blends of coral food generally contain a mixture of zooplankton and phytoplankton, which offer a much more nutritionally complete profile of vitamins. Feeding Acan Coral gives them a tremendous boost in growth rate. While they can live solely off of their zooxanthellae and dissolved organic matter, they will grow significantly more slowly.

Fed Acan Corals are one of the fastest LPS corals out there. So if you want to see them vigorously expand then target feed them once or twice per week. A single small piece of shrimp or a food pellet per polyp is enough.

Broadcast feeding using larger food particles isn’t recommended because any uneaten food contributes to poor water quality. And corals are notoriously fussy at times when it comes to eating. But you can broadcast feed with plankton-based foods, especially if your other corals have a robust feeding response.

Acan Corals are typically nocturnal feeders in nature which might explain their pickiness. However most Acans can be trained to feed whenever is convenient for you.

In nature Acan Corals reproduce both sexually and asexually. Corals rely on cues from the tides and lunar light cycles to coordinate their mass spawnings. Therefore they are extremely unlikely to do so in most aquariums.

Fortunately, it’s very easy to propagate Acan Corals yourself! They will occasionally drop buds, clones of themselves at the base of the coral. But fragging your own coral ensures you’ll have new clones to work with whenever you wish.

Acan Corals are an excellent species to frag because they have very large corallites, which are the skeletal cups that corals build beneath their actual flesh. When fragging an Acan it’s easy to get nice, whole corallites without damaging any of their neighbors. They also have a very fast recovery period from being fragged, especially when fed properly.

To frag an Acan Coral, you’ll want to prepare a bath of aquarium water plus iodine. Once you’ve cut the frags you’ll want to soak them for 5 minutes before moving them back to a tank. The iodine helps prevent them from getting infected by bacteria while they recover.

You’ll likely need power tools to frag an Acan Coral, such as a bandsaw lubricated with water. When removing your Acan Coral from the water, give it a few splashes and dunks to get it to fully retract its polyps.

And once you’ve cut the frags apart, get them soaking quickly and then glue them to frag disks or bits of coral rubble. The Acan Corals will quickly regenerate and should be willing to feed within hours to days!