While Lionfish are famous for being large and predatory they are quite peaceful towards fish they can’t eat. There are several species that make fantastic tank mates for the majestic Lionfish and here are 10 of the very best for your marine aquarium!

Here are 10 of our favorite tank mates for Lionfish:

Saltwater Angelfish are ideal tank mates for Lionfish because most of them are too large to be eaten and they eat entirely different foods. Stay away from most of the Dwarf Centropyge species and you’ll be fine.

One of my favorites is the Atlantic Rock Beauty. Like many of the medium to large species it’s mostly a specialist sponge-feeder. So you’ll need to stock up on marine Angelfish formulas that contain it, macroalgae, and more of the sessile organisms Angelfish typically eat.

Rock Beauties can be somewhat territorial, making them a good match for Lionfish. While peaceful, Lionfish have defensive barbs to discourage too much Angelfish attention.

Butterflyfish include some of the most beautiful yet demanding saltwater fish in the trade. However the Auriga Butterfly is a handsome exception, with a bold black, white, and yellow pattern. Other easy to keep species include the Millet (Chaetodon miliaris) and Sunburst Butterflyfish (Chaetodon kleinii).

Like most species the Auriga is a grazer of polyps, worms, and other live tidbits hidden in coral crevices. However they aren’t nearly as picky as their cousins and will accept a wide variety of fresh and frozen food offerings.

Keep in mind that being live rock grazers they aren’t reef safe however they will get along with Lionfish and nearly any other fish!

Tangs and Surgeonfish are colorful vegetarians that typically form large schools in nature. Unfortunately they have a complex social dynamic that requires the infinite space of the ocean.

In aquariums the vast majority are intolerant of each other and will fight to the death. However the Blue or Hippo Tang is a rare exception that gets along with its own kind so long as you introduce them together.

Like all Tangs they need a majority vegetarian diet: blanched vegetables like spinach and cauliflower plus regular additions of marine macroalgae. If you happen to be running a refugium, you’ll have an infinite source of macroalgae for your Tangs. 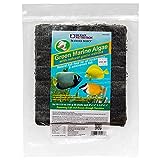 If not, I strongly recommend picking up sheets of macroalgae for your Tangs. When not given vegetables in abundance they are prone to developing Hole in the Head (lateral line) disease.

Clownfish include some of the most popular fish in the trade. However the majority of these small damselfish will end up as snacks for predatory Lionfish, except for the rather large Maroon Clownfish.

As the largest Clownfish species it’s quite safe in a tank with other medium to large fish. In fact, they should be the last fish you add because they are notoriously bad tempered and territorial as they mature, especially the large females.

So long as there’s space to stretch, a Maroon will get along fine with a Lionfish.

With their bright blue teeth and glaring red eyes you’d think the Harlequin Tuskfish was one of the meanest fish in the sea.

Despite their toothy, fearsome appearance these wrasses are rather shy and retiring. They prefer to glide in and among coral crags searching for crabs, shrimp, snails, and other crunchy fare.

They are ideal tank mates for Lionfish and other fish-only setups as a result. As they mature they lose their shy character and tend to swim out in the open more. Don’t forget to regularly provide fresh crustaceans and mollusks along with prepared carnivore food formulas!

While Lionfish glide about actively hunting prey Anglerfish take a different approach. They find a perch among rocks or coral and blend into their environment using their skin texture and changeable color.

Many species also use an antenna-like lure on top of their heads, which gives them their name. Once a curious fish or shrimp comes in for a taste the Anglerfish sucks its prey into it’s enormous mouth in an instant.

Make sure you choose larger species like the Striated Anglerfish (Antennarius striatus). Some species don’t grow much beyond 4 inches and will eventually be a meal for an adult Lionfish.

Panther or Polka-Dot Groupers are a hardy, attractive fish often sold as 2-3 inch juveniles. However these fish grow rather large; over 2 feet long as adults. They will eventually need 250-300 gallons of space.

Panther Groupers are also ambush predators that will eat any fish, shrimp, or other animal that can fit in its mouth. However they are entirely peaceful; ignoring any fish it can’t eat.

Panther Groupers should be given a cave or other hiding place to return to and defend. So long as it feels secure your Grouper will patrol all levels of the water column seeking its next meal.

The Clown Triggerfish is large, beautiful, and tough enough to live alongside nearly any other fish, including Lionfish.

Triggerfish use their massive teeth to eat invertebrates like sea urchins, crabs, and clams. In the aquarium you’ll want to offer a mixture of fresh or frozen shrimp and clams along with carnivore formulas. Freeze-dried krill and other easily shelved items are also appreciated! 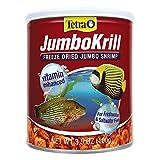 Being curious, large, and fairly aggressive fish, Triggerfish will bite tank mates and even human hands if they feel threatened or cornered. So be very careful when reaching into the tank. Many large Triggerfish species will even chase and bite at divers if they enter their territory!

Foxface get their name from their elongated head with black and white bands, similar to a red or grey fox’s. However Rabbitfish are almost entirely vegetarian. Like Tangs they feed mostly on macroalgae and encrusting microorganisms.

Hardy, large, and peaceful, they make ideal tank mates for the predatory but peaceful Lionfish.

Be careful when moving your Foxface Rabbitfish. Their dorsal fin spines are venomous; while not typically fatal the venom is said to be significantly more painful than a wasp’s sting. Running hot water on the wound will help break down the protein-based poison (this also helps with Lionfish stings).

Moray Eels are large, mean-tempered predators too large for the majority of aquariums. However the Snowflake Moray is an exception. Maxing out at 2 feet in length it is a great companion for Lionfish, Triggerfish, and other semi-aggressive fish.

Like their larger cousins Snowflakes need rocky holes to live in. They appreciate being fed live or fresh meaty items via feeding tongs as they rarely take food from the surface. Snowflake Eels can even be trained to take food from your fingers, at your own risk, as they have large teeth and can easily inflict a painful bite.

Snowflake Moray Eels are mostly nocturnal and leave their holes to hunt for sleeping fish and shrimp. Make sure your aquarium is sealed and there are no holes large enough for them to slip through or you may find your eel on the floor the next morning!