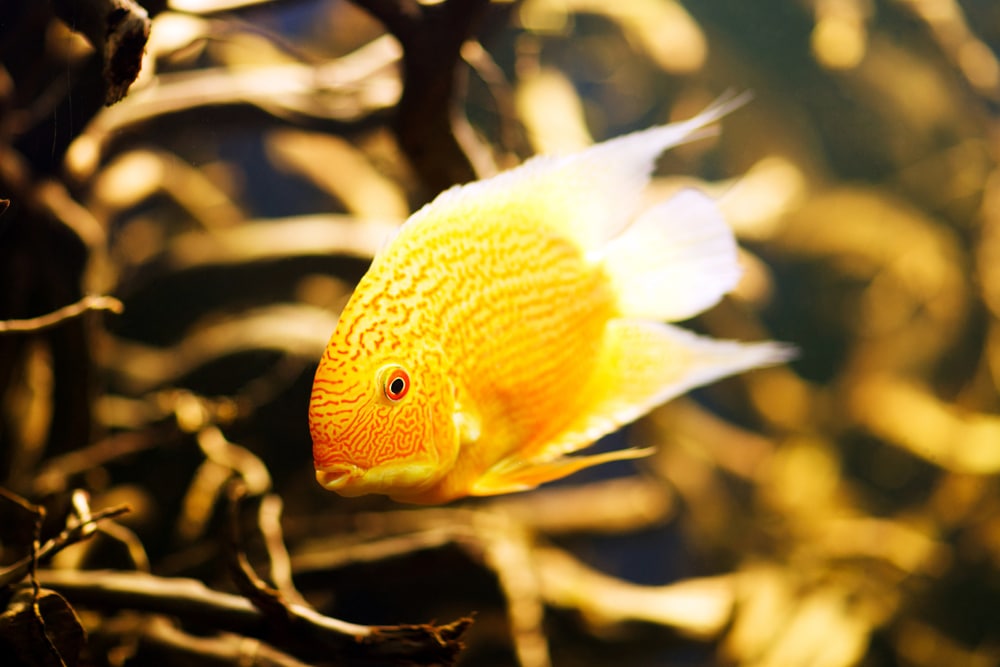 Severums are medium to large cichlids that are becoming more popular in today’s hobby. Impressive yet mild-mannered as cichlids go, they are a great addition to the large community tank. Here are the 10 best tank mates to go along with your Severum!

Here are 10 of our favorite Severum tank mates:

As another South American native, Angelfish are a perfect match for Severums. Both are medium sized, fairly peaceful cichlids with a compressed body to slip through dense weedy undergrowth.

Angelfish are a lot more popular and come in several color morphs that will add variety to your Severum setup. Whether you choose albino, marble, silver, or something else, know that their care requirements are the same: neutral to slightly acidic pH, warmer temperatures (76-84F), and a varied carnivorous diet.

Angelfish also prefer being kept in schools; individuals tend to be shy and retiring kept alone. If you decide to keep both Angels and Severums together I recommend at least a 55 gallon aquarium as being cichlids they will sometimes be slightly aggressive towards one another.

However an adult Severum will have the length and weight advantage and may cause too much trouble for Angelfish in a smaller tank.

The Blood Parrot Cichlid is a popular hybrid of two Central American fish: the Midas and Redhead Cichlid. Endearing and bold, these lumpy fish are found in pet stores around the world and are great Severum tank mates because they are similar in size and temperament.

Unlike most hybrid animals Blood Parrot Cichlids are occasionally fertile and breed true. However it’s much more common for the females to be bred with another Cichlid in order to get fertile eggs.

Like their original parents Blood Parrot Cichlids can be slightly aggressive in nature. However their mouths are too small to cause any harm to their tank mates. Make sure any pellets or live foods offered are appropriately sized; if your Severum can eat it your Parrots should be able to as well.

Hoplo Catfish are one of my favorite larger community tank fish. They are impressively large, reaching maturity between 5 and 8 inches in length. Yet they are entirely peaceful; their tiny mouths ensure that only young fish are at risk of being eaten.

Hoplo Cats are basically giant Corydoras and are members of the same family (Callichthyidae). They also have similar care requirements; besides needing a larger tank they thrive in neutral to slightly acidic chemistry but tolerate alkaline conditions as well (pH 6.0-8.0).

They are also ravenous eaters and will dash to the surface to compete for prepared flakes and pellets with the rest of your community fish. Live and frozen invertebrates like worms are a real treat for Hoplo Catfish as well!

If you treat them well it’s possible you’ll witness their spawning behavior. Unlike the egg-scattering Corydoras, male Hoplo Catfish create nests of bubbles and surface debris for their eggs!

The Black Skirt Tetra is yet another South American Severum-friendly fish. Small Tetras are typically off-limits because Severums are quite willing to snack on them. However the thick-bodies Black Skirt Tetra reaches up to 2½ inches as an adult and is very safe.

Like most Tetras they are schooling and prefer their pH around 6.0-7.0 and elevated temperatures (76-84F). Peaceful, inexpensive, and active, they are ideal community tank residents.

Recently scientists in Asia have added jellyfish and coral genetics to a line of Black Skirt Tetras. These Glofish make their own fluorescent proteins that look stunning under normal light but absolutely incredible under a UV bulb (blacklight).

In fact, Glofish specialty aquariums are ideal for them because the kits include not only dark gravel that helps them pop against the background but both standard and UV bulbs!

Gouramis are a group of fascinating air-breathing fish from Southeast Asia that include some of the most popular aquarium specs in the world. Bettas are a type of Gourami and the group includes Blue, Pearl, and Snakeskins, among others.

You’ll need to stick to the medium to large species, which I cover in great detail in my guide on 13 Popular & Beautiful Types of Gourami. The best Severum tank mates among the most popular species are the Blue, Pearl, Kissing, and Moonlight Gourami. Smaller species like Dwarf, Honey, and Croaking Gouramis are at risk of being bullied, if not eaten, by a Severum.

Gourami are mostly tank-bred and thrive in a wide range of water conditions. Some of the larger species like Blue and Giant Gourami can be semi-aggressive in their own right, making them perfect matches to the sometimes bossy Severum.

While many of the smaller Barbs are on the shy side Tiger Barbs are a great match for Severums while still being small enough to work as dither fish.

Tiger Barbs work well because they are large enough to avoid being eaten and are fast enough to not be easily harassed. Being occasionally nippy themselves they readily tolerate the occasional chase.

Be careful if keeping them with slow fish that have long, flowing fins, like Angelfish, Bettas, and Gouramis. Tiger Barbs are fin-nipping troublemakers and may cause these fish severe stress.

Make sure you offer them a varied omnivorous diet with both plant and animal components. I mix vegetarian flakes in with fresh and frozen foods. Paired with a high quality standard formula you’re bound to see the ruddy noses that males develop when in breeding condition and given a diet rich in carotenoids!

Convict Cichlids are a great match for Severums. While significantly feistier than Severums they are quite a bit smaller, ensuring they can’t cause too much trouble. Typically they save their aggression for each other and a small group of 4-6 Convict Cichlids are fascinating to watch.

Males and females are easily told apart: females have orange scales on their bellies and are smaller. Males are larger, have longer fin extensions, and fully grown adults can even grow a nuchal hump similar to other Central American cichlids.

If you manage to breed them, which is quite easy, ensure the tank is either large enough or you move your mated pair to a separate aquarium. Convict Cichlids are quite vicious and will drive most of your fish to the far corners of the tank in defense of their young unless kept in 40+ gallon tanks.

While they aren’t true saltwater sharks it’s clear how the Red Tail Black Shark gets its name. It’s sleek body, triangular dorsal fin, and active nature all remind us of the large marine predators.

As Cyprinids they are closely related to Barbs and Goldfish. And like most of their cousins Red tail Black Sharks love a mixture of plant and animal matter in their diet: blanched vegetables and veggie flakes should be served alongside protein-rich foods.

Hardy and easy to find, their only requirement is that they must have a cave or other hiding space to call their own. Typically the Shark will claim that spot and vigorously chase intruders but will otherwise be content to leave their tank mates alone.

If they don’t have a home cave they are likely to claim a large part (or all) of the bottom as their territory and make life miserable for their tank mates, even your Severum.

African Butterfly Fish are surface dwelling predators with a unique appearance. They have a cryptic (camouflage) appearance, mimicking floating leaves and debris. They lie in wait for insects to land on the water or small fish to swim by. Once they get close the Butterfly Fish quickly lunges.

Being members of the order Osteoglossiformes they are close cousins to the much larger Arowanas. I recommend them as a great substitute if you like Arowanas but don’t want to maintain a 250+ gallon aquarium.

Sometimes it’s boring keeping the same fish as everyone else. If you’re not too thrilled with Common Plecos consider picking up a Bristlenose Pleco instead. They grow much smaller, with most species maxing out at 6 inches. A few may grow a couple inches larger or smaller but none are tank-busting monsters like Common Plecos.

They have spectacular facial whiskers, especially the males, which are thought to serve several purposes. It’s believed they aid in smelling out food, like other catfish whiskers, and also help the Pleco sense their environment in dim or muddy conditions.

Bristlenose Plecos are also great algae eaters. They do require mature water-logged driftwood in their aquarium as they eat it to aid their digestion.