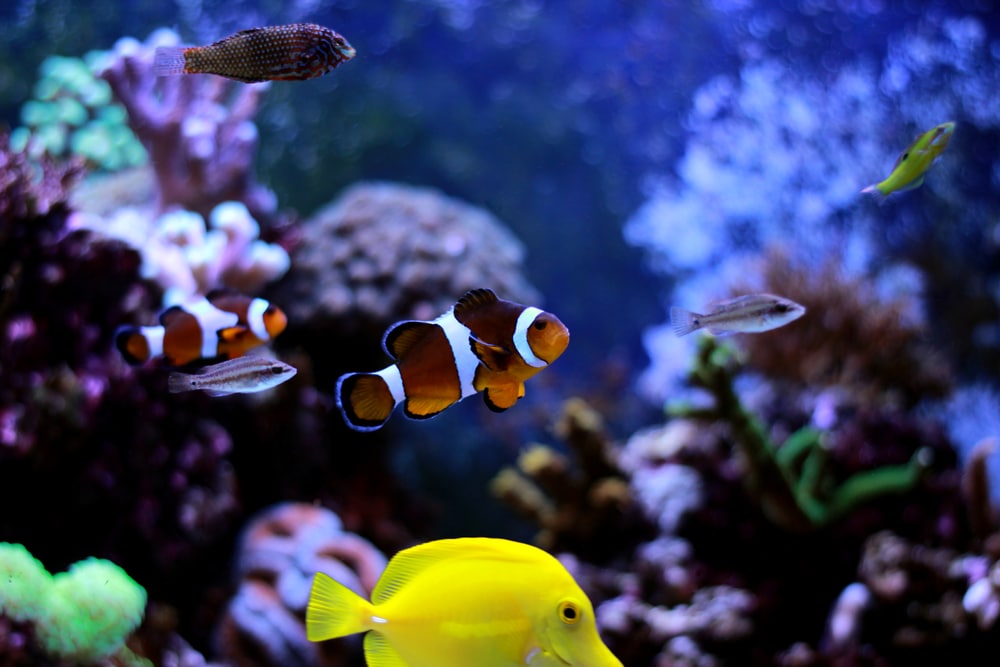 Anyone who has given some thought to starting a saltwater aquarium inevitably finds themselves wondering about the cost to maintain one. While budget setups are fairly comparable to freshwater the more you get into dietary requirements, lighting, and trace elements for rare fish and corals, the more costs shift.

Fortunately, you still don’t need to break the bank to maintain a saltwater aquarium. Here is a basic breakdown on the categories that most differ from freshwater systems!

When it comes to fish food most marine formulas contain similar ingredients to freshwater fish preparations. Standard fare contains omnivore-friendly blends while herbivores have spirulina-based formulas and carnivores can choose any number or fish or shrimp-based blends.

However there are many saltwater fish and invertebrates that need specialty food. Tangs need ample macroalgae supplements or they develop Hole in the Head disease, a fatal vitamin deficiency. And many Saltwater Angelfish need food containing sponges or sponge extracts to stay healthy.

Saltwater fish food is comparable to freshwater blends, running anywhere from $5-15 depending on the formula and amount.

If you make your own DIY Fish Food blends costs can vary quite a bit. You should consider not only the bulk ingredients like mussels and vegetables but additives like Garlic to enhance flavor, scent, and boost the immune system of your fish.

Keeping your water quality at a suitable level is one of the most important factors in any aquarium – especially with saltwater tanks.

Both fresh and saltwater aquariums use water test kits to monitor the concentration of dissolved compounds that affect fish health. pH monitoring is necessary for both systems as is checking on ammonia concentrations to ensure its being broken down by your beneficial nitrifying bacteria!

Typically you’ll spend $15-30 on test kits. The costs depend on how many test kits you decide to go with as well as the type. Paper strip tests are quicker and more convenient. They are also less expensive than fluid reagents. However I don’t recommend them because they are less accurate which really matters when dealing with sensitive species.

It’s also more economical to pick up an all-inclusive Master Test Kit because in saltwater aquariums you’ll be testing nitrite and nitrate more often. In freshwater systems ammonia is the critical agent to be testing for.

You can often go without a dedicated nitrite/nitrate kit so long as your freshwater aquarium is mature and you perform water changes regularly. Saltwater organisms are much more sensitive to these ammonia byproducts.

A hydrometer is mandatory for saltwater setups as they give instant readings on the salinity and specific gravity of your water. Without a hydrometer keeping track of salinity, which can change due to influences like evaporation, would be a guessing game. Hydrometers are typically less than $10 apiece.

If you’re keeping sensitive marine invertebrates like coral you’ll want a Protein Skimmer. Like the name suggests these specialized filters use foam bubbles to attract and remove organic compounds from aquarium water.

By removing organic matter before it can decompose into ammonia, nitrite, and nitrate, your water quality remains pristine. Unlike freshwater ecosystems where some nitrate buildup is no cause for concern marine organisms are particularly sensitive to nitrate.

The cost of Protein Skimmers depends on the size of your aquarium. For smaller nano-reefs (30 gallons and under) they can be found for under $50.

Water additives and conditioners can be used for a wide variety of issues and preventative measures. This section detail a few that you may need.

Aquarium salt is the most essential and obvious addition to the routine of a beginning marine aquarist. Sourced from the sea, it contains not only NaCl (Sodium chloride) but trace minerals like magnesium, calcium, and strontium.

Marine aquarium salt gets cheaper with volume; bags suitable for a 10 aquarium can run around $10-15. On the other hand, enough salt for 200 gallons of aquarium water will cost you $50-75. Buying in volume is always better in the long run because you’ll need salt each time you perform a water change.

If you decide to get into corals and other sessile invertebrates you’ll want to look at salts fortified with additional minerals. These organisms pull elements directly from the water to build their stone-like skeletons.

One of the challenges of keeping animals like coral and crustaceans is maintaining proper water chemistry. As these organisms thrive they’ll slowly deplete the water column of trace minerals. You’ll need to replenish these elements over time or their development will halt and their health will decline.

The exact type of trace additives you need depends entirely on the animals on hand. For corals the most important elements are calcium, magnesium, and strontium for skeleton construction, and carbonate for regulating pH.

Trace minerals cover a wider spread of elements and are used in smaller amounts. Iron is essential for photosynthetic output (corals, sea anemones, macroalgae) while molybdenum is actually used by beneficial bacteria.

All of these elements are present in standard marine aquarium salt mixtures. However they can be rapidly absorbed by the organisms of your tank. Fortunately, bottles of essential elements and trace minerals are inexpensive, ranging from $10-15 each, depending on the contents.

Live rock and live sand is probably the #1 shocker to many first-time aquarists. What is live rock and why in the world is rock so expensive?

However they can also include potentially troublesome hitchhikers like Bristle Worms, Aiptasia anemones, and Brittle Starfish. Cultured Live Rock is usually free of undesirables and doesn’t need curing (waiting for sensitive marine life to die off and decompose). On the other hand, wild Live Rock can come with any number of unique organisms and often has base colors characteristic of the region collected (ex: Fiji, Tonga Rock).

Live Rock is not only beautiful thanks to the encrusting life but functional. It provides additional surface area for beneficial bacteria to colonize thanks to its porous structure. Essentially Live Rock is an extension of your biological filter.

Live Rock costs $5-10 per lb, depending on its source and the organisms attached to it. A great alternative to Live Rock is Dry Base Rock. This stone has all of the potential colonization area of Live Rock; it’s just dead. For now – once added to your aquarium it will slowly be colonized by marine organisms.

Live Sand runs around $1 per gallon, making it a very economical option. Made from aragonite (crushed coral) it also helps buffer the pH towards alkalinity, which all marine organisms prefer. Some brands also use silica sand which is entirely fine! The theory that silica sand causes diatomaceous (brown) algae is false as the chemical is barely soluble in water. Other nutrients like nitrogen and phosphorus have a greater impact on diatom growth.

If you decide not to go with Live Sand most of the sand or gravel substrate choices available for freshwater can work just as well in a marine environment! Just avoid substrates that mimic riverbeds and other odd themes if you’re going for a natural look.

Actinic lighting is a popular choice for reef aquarists. It’s concentrated in the blue spectrum and enhances the appearance of crystal clear water. Actinic lights also bring out the fluorescent character of many corals thanks to their significant UV output.

However they don’t provide enough lighting on their own for healthy photosynthesis. Actinic lights are more decorational than functional and thus aren’t essential to a marine setup.

I recommend going with LED light fixtures if you have photosynthetic organisms. Reef LED fixtures are low energy, moderate cost ($80-200 for nano-reefs), and provide an attractive, photosynthetically useful light spectrum.

While LED lighting is significantly costlier than standard fluorescent aquarium fixtures the bulbs are very long lasting and even more energy efficient! Do keep in mind that LED fixture costs can vary tremendously. Costs depend on, among other things, the length of the fixture, output, number and type of bulbs, and control features like dimming, timers, and selective color.

The common wisdom that saltwater fish are more expensive than freshwater ones is only partially true. Budget saltwater fish like Damselfish can be found as cheaply as $6 each.

Clownfish and Gobies can be found for less than $20, even captive raised. While still not as cheap as Guppies or Neon Tetras marine fish can be quite affordable!

Once you start getting into not only larger setups but larger and rarer fish, prices go up accordingly. Rare adult Angelfish and Tangs can cost hundreds or even thousands of dollars. And captive bred specimens of uncommon or popular species may be just as expensive as wild fish since they tend to be more vigorous and already adapted to pellets and flakes.

The costs of maintaining saltwater aquariums is quite variable since it depends on how far you want to delve into the hobby. However I find costs to be only slightly higher than keeping freshwater fish, especially if you’re not looking to raise corals or sea anemones.

Don’t let the long list of optional components frighten you away from one of the richest aspects of the aquarium hobby!