Mollies are instantly familiar to all aquarists. Their brilliant colors and inexpensive price makes them a favorite of freshwater hobbyists. But did you know that Mollies are also a fantastic addition to saltwater tanks? In fact, Mollies actually prefer your reef tank to a community of freshwater Angelfish and Gouramis!

Getting to Know Saltwater Mollies

Mollies are live-bearing fish in the family Poeciliidae. This means that they are closely related to Guppies, Platies, and Swordtails, some of the most popular freshwater aquarium fish around. Most livebearers come from coastal regions in the Americas where rocks tend to add a little to a lot of hardness (dissolved minerals) to the water. And their proximity to the coast means that most livebearers prefer a small amount of aquarium salt in their water.

The majority can do without since they rarely stray far from their home rivers and streams. But Mollies actually require aquarium salt because they are estuarine fish that spend most of their lives in brackish environments. And in these regions the water can fluctuate from full freshwater to full oceanic on a daily basis as the tides come and go!

This can surprise both freshwater and saltwater hobbyists who are used to seeing Mollies sold strictly in the freshwater department of pet stores. Mollies have a reputation for being slightly more difficult to care for than other livebearers.

They are prone to ich and body fungus but not because they are somehow weaker than their cousins. Mollies are sensitive because they aren’t getting the salt that their bodies expect! Providing Mollies with as much salt as possible boosts their hardiness and ensures you’ll have little to no trouble with these chunky livebearers. So let’s talk about caring for saltwater Mollies!

Why Keep Mollies in a Saltwater Aquarium?

There are several reasons why it’s a good idea to keep saltwater mollies. For starters, they are some of the hardiest marine fish around and make great first fish to cycle a brand new tank with. By feeding and creating ammonia with their waste, saltwater mollies can get your biological filtration system going, helping the tank to mature so you can add sensitive, pricier marine fish. Otherwise your less sensitive fish are at risk of falling prey to new tank syndrome, which happens when ammonia levels remain high and your beneficial bacteria haven’t multiplied enough to handle it.

Mollies are also very good algae eaters; in fact, they are mostly herbivorous. This is another reason why they tend to do poorly with inexperienced aquarists. They don’t get the nutritious vegetables they crave and standard flake formulas aren’t rich enough for them. Mollies live green hair algae and other forms of algae that can coat live rock and compete with corals for light and living space. They don’t have the teeth to do much damage to macro algae and will help keep the macro algae fronds clear of green algae coatings!

If you want to try breeding your fish, it doesn’t get any easier than Mollies. When given a little aquarium salt and a good diet they breed as readily as Guppies do. And being livebearing fish, they give birth to large, well developed fry that will quickly start fending for themselves.

Mollies also make ideal feeder fish for Moray Eels, Lionfish, Groupers, and other marine predators for this reason. Saltwater acclimated Mollies will survive if they aren’t immediately eaten for a future meal.

You can even keep a ready supply of saltwater Mollies in your sump or refugium for a steady supply of live food for your predators.Since Mollies will produce a constant stream of live babies these fry can act as a nutritional boost for opportunistic tank mates, corals, and anemones as well.

And finally, Mollies are just beautiful fish! They have colors on par with any reef fish; the jet black Common Mollies are velvety and stunning, as are the metallic gold hues of Sailfin and Yucatan Mollies!

The term “Molly” actually refers to several species in the genus Poecilia. But only two of them are especially common in the hobby; the Common Molly (Poecilia sphenops) and the Sailfin Molly (Poecilia latipinna). There is also a Yucatan Molly that rarely shows up in specialty shops (Poecilia velifera). It’s one of the largest livebearers in the world, reaching up to 8 inches in length! But the Sailfin and Common Mollies are going to be the two species you run into the most.

Common Mollies typically come in one of three color varieties: Gold Dust, Dalmatian, and Black. Sailfin Mollies can display any of these colorations thanks to interbreeding with Common Mollies, plus a checkered orange and teal coloration all their own! Both species are quite hardy in saltwater; it depends mostly on which fish you prefer and what sort of tank mates you’ll be keeping them with. Sailfin Mollies are better alongside larger tank mates while Common Mollies can fit into any community of smaller marine fish!

Mollies not only prefer saltwater to freshwater but act as beneficial algae eaters and are beautiful to look at as well. Let’s talk about how to care for saltwater Mollies, long term!

Mollies thrive in the same conditions as other marine fish. They are found from coastal North Carolina all the way down to the Atlantic coast of Mexico and Central America. They therefore thrive in temperatures ranging from 65-78℉. And their flexibility when it comes to salt concentrations means they can live in anything from full freshwater to standard marine conditions (specific gravity of 1.010-1.025). Mollies also appreciate the high pH found in most saltwater tanks (pH 8.0-8.24) thanks to the buffering capacity that crushed aragonite provides.

While Mollies are commonly found in saltwater you’re almost never going to see them already acclimated to it in an aquarium store. So you are going to have to acclimate them to marine conditions yourself! There’s actually a healthy debate on the best process because Mollies adapt to saltwater very well. The two main schools of thought are: slow/moderate drip acclimation is best versus simply tossing the Mollies right into the tank!

The majority of evidence for one argument versus another is anecdotal. I recommend a moderate drip acclimation since that best simulates the conditions Mollies would encounter in nature. There are few places where the water conditions instantly change from fresh to saltwater. That said, if you’re short on time and feel confident, know that many aquarists have found that Mollies can indeed be adapted instantly to saltwater conditions where they do just fine.

The best practice I’ve found is to set up a drip acclimation system for your soon to be saltwater Mollies. Drip acclimation involves using a bucket with the Mollies in the freshwater that came from the pet store. You’ll want to keep the bucket heated and well oxygenated with an airstone as well since the small volume of water they start out with will rapidly cool, potentially stressing or killing your fish.

Next, you’ll want to use airline tubing to set up a gravity flow in the same way that you would as if you were using a gravel vacuum (I go into much greater detail in my guide to acclimating fish above). Tie a series of loose knots in the airline tubing that allow you to control the flow so that you’re only getting around 2 drops of water per second.

At this stage, it’s only a matter of patience! Allow water from your saltwater tank to enter the freshwater bucket over the course of 3 to 6 hours, depending on how much time you have to acclimate them. Some advocate for as long as 12 hours but I find that Mollies are much more adaptable than this. And make sure that you keep a constant eye on the level of water within the bucket as you don’t want to deal with overflows onto your floor. 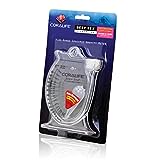 A hydrometer is also important, allowing you to monitor the salinity of the water within the bucket. Once the salinity reaches full marine conditions (1.020-1.025) you can add the Mollies directly into your main aquarium!

Mollies are peaceful, colorful, and active residents of any marine community tank. They aren’t territorial and ignore the majority of their tank mates except for one another. Even then, the males will occasionally jostle for access to females and may chase females they sense are receptive around. But their lack of formidable teeth or tempers means these chases never end badly.

They can be targets of more aggressive fish, such as Damselfish, larger Clownfish like the Maroon Clownfish, Dottybacks, and larger Angelfish, so keep them with more peaceful marine residents like Percula Clownfish, Royal Grammas, Pygmy Angelfish, and Blue Hippo Tangs.

Mollies are also reef safe, making them great additions to tanks with LPS (large polyp stony), SPS (small polyp stony), and soft corals. They do like to pick at and graze on the substrate constantly. Excess mucus trapping bits of food or algae collecting in and among your corals may be a target for them, which can cause polyps to retract sometimes. But Mollies aren’t coral predators and will eventually move away from them. They also get along nicely with giant clams, feather duster worms, and other sessile invertebrates!

Saltwater Mollies are peaceful, easy to keep, and easy to breed fish that make a great addition to any fish only or reef aquarium. And you don’t even need to buy them already acclimated since the procedure is easy and only takes a few hours! Their vegetarian habits even make them useful additions to your saltwater clean up crew. So why not give saltwater Mollies a chance in your reef or fish only tank?