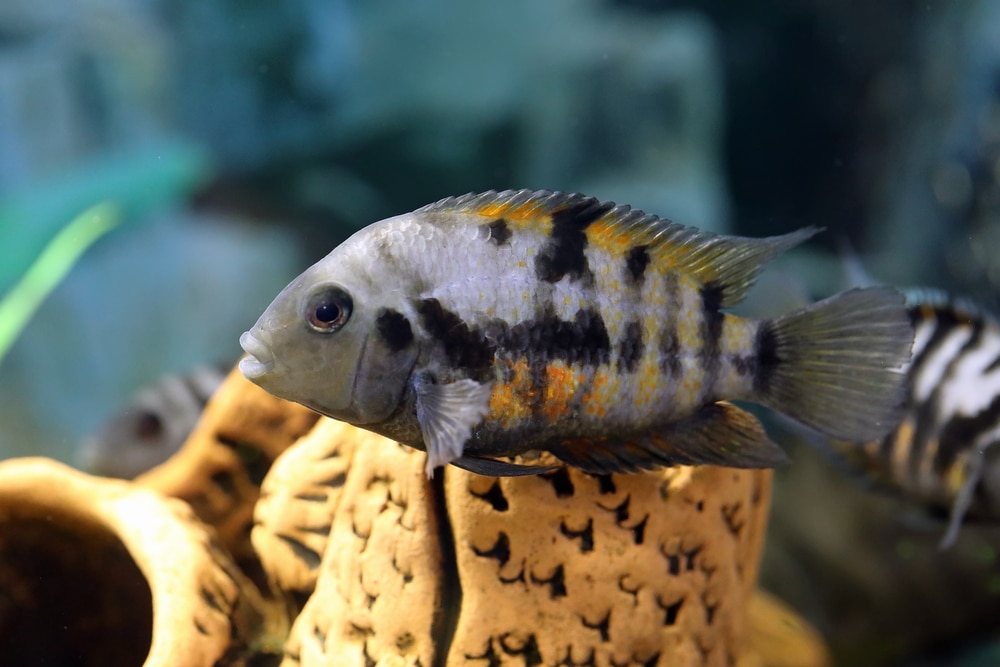 Choosing Convict Cichlid tank mates can be a bit of a challenge. These feisty cichlids are large enough to kill or eat many small community fish. And when breeding they sometimes lay claim to the entire aquarium, harassing and trying to evict everything in sight!

That’s why it’s best to choose either large and fast or equally aggressive tank mates when keeping Convict Cichlids. Here are the 10 best fish to keep alongside them!

Here are 10 of our favorite tank mates for convict cichlids:

Giant Danios are some of the best dither fish for aggressive species because they’re too large to be easily eaten. As a schooling species they should be kept in groups of at least 6 individuals.

They are a little unusual in that they can be semi-aggressive on occasion, nipping at slow moving, long finned fish like Gouramis and Angelfish. Adult Giant Danios will also eat tiny tank mates like Neon Tetras or Guppies so choose carefully..

While both sexes are large male Giant Danios are slightly smaller and slimmer than females. The species breeds easily in aquariums when well fed but unless you remove the eggs they scatter across plants the young are likely to be eaten.

Giant Danios are undemanding when it comes to feeding and water conditions but prefer temperatures around 72-80F and a moderate pH (6.5-7.5). Since nearly all are tank bred nowadays they accept a wide variety of prepared and frozen foods.

Firemouth Cichlids are an attractive species hailing from the same region as Convicts. Both species prefer tropical temperatures and neutral to slightly alkaline water (pH 7.0-8.0).

Firemouths will accept prepared food but as carnivores they should be given fresh and frozen meaty items regularly.

When fully grown Firemouths tend to be slightly longer than Convicts but not as bulky. Both species are also very evenly matched in terms of temperament.

Firemouths tend to be less aggressive towards their tank mates but won’t back down if harassed by Convicts. And when spawning Firemouths are just as aggressive as other Cichlids in defending their eggs and fry.

And like most medium to large Cichlids Firemouths love to dig but tend to be gentler on plants than other Central American species!

Temperament-wise, Jack Dempseys are mean but no more aggressive than other similarly sized Central American Cichlids.

They are great Convict Cichlid tank mates but will outgrow them and need larger aquariums. If kept in too small an aquarium your Jack Dempsey will claim the entire tank as its territory and likely bully the smaller Convicts to death.

There is also a popular Electric Blue color morph that’s almost entirely covered in iridescent blue scales. Do note that Electric Blue Jack Dempseys tend to be more sensitive as youngsters to poor water conditions and disease, possibly due to inbreeding. However when fully grown they are spectacular to look at!

If you’re interested in getting to know them better here is my list of 15 Tank Mates for Jack Dempseys!

Pictus Catfish are sometimes sold as Freshwater Sharks because of their sleek profile, forked tails, and fast swim speed. They also share the predatory nature of Sharks, hunting for smaller fish, shrimp, and worms to prey upon. However they are peaceful towards anything they can’t swallow whole.

As tank mates for Convict Cichlids, Pictus Catfish are a good match because both species are around the same length but have very different habits and personalities.

Breeding Convict Cichlids may find Pictus Catfish troublesome because their fry are vulnerable to being eaten, especially at night.

Choosing a Pleco can be a bit of a challenge. Common Plecostomus will reach nearly 2 feet in length but Dwarf Otos are too small to be Convict Cichlid tank mates.

Rubber Plecos and Bristlenose Plecos are ideal because they are medium sized, hardy, and able to fend off occasional aggression from Convicts. While rather shy they do a great job of removing most types of algae from aquarium hard surfaces and plants.

Since there is rarely enough algae to keep Plecos constantly fed you should have a supply of vegetarian based prepared food (like algae wafers) on hand. Mixing in blanched vegetables like spinach and zucchini also ensures your Plecos get the roughage they need!

Boldly striped and continually active, Clown Loaches are popular for good reason! As Southeast Asian natives they should be kept in warmer temperatures (75-84F) and slightly acidic water (pH 6.0-7.0). However they will adapt well to the neutral to alkaline waters Convicts prefer.

Clown Loaches are surprisingly fast for hefty bottom dwellers. Despite being scaleless they can easily avoid occasional Cichlid aggression so long as the tank is spacious enough. While they are unpicky when eating they prefer worms and other meaty invertebrates.

The only real issue with keeping Clown Loaches is their eventual size. While not fast growers they will reach 10 to 12 inches. Clown Loaches also prefer being kept in schools, making them suitable only for the largest of aquaria.

When seen as 1 inch juveniles in pet stores Tricolor Cichlids don’t look especially impressive. However as they mature they take on a bold yellow background, with a pattern of deep black blotches and a scarlet red belly.

Like most of their cousins in the genus Nandopsis, Tricolor Cichlids are piscivores, meaning they eat mostly smaller fish. They should be given a mixture of presoaked carnivore pellets and live prey like worms and feeder guppies.

And as Central American Cichlids they are plenty aggressive and will fight with Convicts if kept in too small of an aquarium. Give both species plenty of room to claim territories, dig, and explore when keeping them together!

Like Giant Danios, Tiger Barbs are infamous fin-nippers and will cause problems for slow targets like Bettas. However they are excellent Convict Cichlid tank mates and by actively schooling they create an environment that encourages Convicts to be bolder.

Tiger Barbs also come in a rainbow of colors, including Albino, Green Tigers, and even a genetically engineered Globarb! All have identical care requirements: tropical temperatures (75-84F), moderate pH (6.5-7.5), and a good variety of prepared and frozen food sized for their small mouths.

Like most Barbs they may sample softer plants on occasion but won’t dig and will leave tougher plants like Java Fern and Anubias alone!

Mbuna is a general term for rock dwelling Cichlids from Lake Malawi, in Africa. Mbuna are a group of closely related Cichlids that are mostly vegetarian. They graze on the algae and biofilms that grow on submerged rocks and nearly all species are only found in Lake Malawi.

There are dozens of compatible species however some popular, easy to care for species include the Electric Yellow Cichlid (Labidochromis caeruleus), Zebra Mbuna (Maylandia zebra), and the Bluegray Mbuna (Pseudotropheus johannii).

Mbuna should also be kept in fairly crowded groups, which diffuses their aggression among the complex social lines that develop. Convict Cichlids are hardy and aggressive enough to fit perfectly in a rock aquascaped Mbuna setup.

Redeye Tetras are the smallest fish on this list of Convict Cichlid tank mates. However they are still large enough to go uneaten even by an adult male Convict and are fast enough to avoid aggression.

These peaceful South American tetras prefer being kept in groups and prefer a mixture of small prepared and frozen foods like Bloodworms, Brine Shrimp, and Tubifex worms. Redeye Tetras are also fine with plants and aren’t fin nippers like Giant Danios or Tiger Barbs.

Their coloration is on the subtle side but they are an attractive compliment to the similar grey and black tones of Convict Cichlids!