While not always the most exciting, algae eating fish are an essential and helpful part of most freshwater fish tanks. Since most aquariums are far more heavily stocked than wild environments, the water is often full of nutrients that fuel algae growth.

The Siamese Algae Eater (Crossocheilus oblongus) is an excellent medium sized algae eater that can thrive in most community tanks. Since they are a little subdued in color and often sold small, they may be skipped over in favor of other algae eaters.

Don’t let that put you off, though! The Siamese Algae Eater is a peaceful fish that can make an excellent addition to your freshwater aquarium. In this guide, we cover everything you need to know about keeping and caring for this unique species.

Let’s take some time getting to know this special little Asian carp!

In the wild, the Siamese Algae Eater is found in Southeast Asia in the Chao Phraya and Mekong basins along with the Malay Peninsula. It usually lives in rivers and streams, although they also thrive in flooded forests during the rainy season.

Being Cyprinids, the Siamese Algae Eater is closely related to Goldfish, Barbs, and Danios. Most cyprinids are hearty omnivores that love a mixture of animal and plant material. Siamese Algae Eaters are as well, but lean heavily towards the vegetarian end of the spectrum.

Siamese Algae Eaters are also quite a bit more sociable than most bottom dwellers. Some of the usual choices tend to be both large and territorial, however, Siamese Algae Eaters keep to themselves and are usually very peaceful towards their tank mates.

The Siamese Algae Eater (Crossocheilus oblongus) can look extremely similar to the Flying Fox (Epalzeorhynchos kalopterus), so in this section we’ll teach you how to identify each species to make sure you’re buying the right fish.

In the below image, you’ll see the differences between the Siamese Algae Eater (top) and the Flying Fox (bottom).

This section covers everything you need to know about Siamese Algae Eater care:

The Siamese Algae Eater is not as small as other commonly available algae eaters such as Otocinclus catfish. They are right in the middle of the size arena, reaching adulthood between 4 to 6 inches in length. They shouldn’t be kept in aquariums smaller than 20 gallons, with 30+ being a much better choice.

The Siamese Algae Eater works best in community tanks with medium sized fish like Gouramis, Barbs, Dwarf Cichlids, and Catfish. They also do well in larger community tanks, but make sure their tank mates aren’t large enough to eat them.

Siamese Algae Eaters can be kept single or in small groups, in which case, you should give each fish roughly 10 gallons of space. While not extremely aggressive, they can sometimes be territorial towards their own species.

Typically, the males are the worst when it comes to this behavior. Unfortunately, it is impossible to visually tell the difference between males and females until they are fully grown.

If keeping a group, err on the side of caution. In addition, it becomes much harder to grow enough algae and biofilm to feed several Siamese Algae Eaters in a smaller aquarium.

The Siamese Algae Eater comes from Southeast Asia where the waters tend to be soft and acidic (pH 6.0-6.5). However, they thrive in both neutral (pH 7.0) and even alkaline conditions (7.0+).

Temperature-wise, they do best around 75-80℉ but will tolerate a few degrees warmer or colder. The majority are captive bred and used to the fluctuating conditions of warehouse fish shippers.

Siamese Algae Eaters tend to be extremely hardy, tolerant of elevated ammonia and nitrite levels, and will even breed in parameters outside of their favored conditions.

But don’t use this tolerance as a reason to get lax on water changes. The aquarium nitrogen cycle can only process so much waste before ammonia, nitrites, nitrates, and other elements become toxic even for the hardiest of fish.

Siamese Algae Eaters are generally plant-safe, so long as they have ample algae and biofilms to eat, or are given plenty of supplemental food in addition to algae. They should be kept in aquariums with live plants since the high light and nutrient levels also grow their favorite foods.

They may have a taste of soft leaves or decaying plants on occasion. However, they typically don’t do visible harm. Eating live plants is a sign that they aren’t getting enough food and you should start offering some of the options discussed below.

Live plants also oxygenate the water, create shade, soak up nitrates, and foster a sense of security for these occasionally shy fish.

The substrate should be one that helps grow live plants. Sand or gravel is pretty irrelevant to Siamese Algae Eaters. Choose one that you get the best growth for the plants you intend to grow and is the most aesthetically pleasing!

I also recommend adding driftwood, rocks, and other flat surfaces that hold space for a little bit of algae to grow. Driftwood in a well lit patch grows both algae and biofilm.

They also create shelter, are beautiful to look at, and release plant tannins that buffer the water towards acidity.

The Siamese Algae Eater is a model community tank resident. Other bottom dwellers such as Chinese Algae Eaters and Plecostomus tend to be not only aggressive, but sometimes latch onto slow moving tank mates to have a taste of their slime coats.

Siamese Algae Eaters stick entirely to algae, vegetables, and biofilms. They are even gentle on soft leaved plants like Cabomba and Anacharis (so long as they are well fed on algae).

Unlike most algae eaters, they can also be kept together in groups. Groups are better than pairs because, while they will occasionally shoal, they are mostly territorial.

The Siamese Algae Eater is not typically aggressive and don’t have large teeth that do a lot of harm, but if one fish is continually bullied it can become fatally stressed. It’s best to only keep multiple Siamese Algae Eaters in aquariums 30 gallons or larger.

Avoid keeping Siamese Algae Eaters with aggressive bottom dwellers. Red Tail Sharks, many large Catfish, and most Cichlids are territorial and quick to start a fight with anything that invades their territory.

If you must keep them together, make sure there are plenty of hiding places and breaks in line of sight for the tamer species.

As their name suggests, Siamese Algae Eaters spend most of their time grazing on the algae that grows in most tanks. They dart about, nibbling away at the glass, leaves, rocks, and other flat surfaces that form miniature gardens underwater.

There are tons of algae eating fish available in the trade: Plecostomus, Chinese Algae Eaters, Hillstream Loaches, Nerite Snails, Amano Shrimp…Why would you choose a Siamese Algae Eater over any of these?

A major reason is their willingness to eat red algae varieties.

Nearly all freshwater algae eaters ignore black beard and staghorn algae. These varieties are technically a dark green in color but the red often shows through when weakened or killed via chemical treatments. Marine macroalgae also tend to be redder.

Red algae are tough, inedible to many fish, and very hard to eliminate. If you have an infestation, a Siamese Algae Eater may be the best choice. They also eat standard green, hair, and most other forms of algae as well. 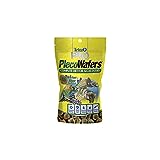 If you don’t have loads of algae for them to eat, you’ll need to supplement their diet with more greens. Blanched vegetables like spinach and zucchini are quickly eaten. If you don’t feel like cooking, prepared foods like sinking algae wafers are excellent!

While they are mostly vegetarian and bottom feeding, Siamese Algae Eaters will also eat animal protein that’s small enough for their mouths. Bloodworms, daphnia, brine shrimp, and other live foods or frozen foods are fine in small amounts!

Unfortunately, Siamese Algae Eaters are one of the many aquarium fish that are nearly impossible to visually sex. When fully mature females can be as much as 30% larger however this takes 3 to 4 years on average.

Until then, both males and females look entirely identical in terms of patterns and size. In Southeast Asia they are raised by the hundreds in outdoor ponds that get rich tropical sun that fuels constant algae growth, so there’s no need to choose males or females.

Breeding is almost unheard of in home aquaria. The best way to do so is to raise a group of 4 to 6 individuals in a heavily planted aquarium. The plants, algae, full spectrum light, and biofilms will create an ideal habitat for your Siamese Algae Eaters to eventually pair off and breed!

An Important Note About “Algae Eaters”

When discussing “algae eating” fish, I always make a point to note that the amount of algae in a normal aquarium is almost never enough to sustain fish such as Siamese Algae Eaters and Plecostomus. Unfortunately, this usually isn’t explained to new fish-keepers by local fish stores.

Many beginners believe that they never have to feed their algae eaters and that they’ll sustain themselves on the algae naturally growing in their tank, but this is usually misguided. If you plan to keep any type of algae eater, make sure you are giving them supplemental feeding of algae wafers or, at the very least, any tropical flake food.

In addition, it is important to know that you’ll still need to keep up with regular maintenance and water changes even if you own a Siamese Algae Eater. Algae control is just a small part of regular maintenance, and it isn’t up to your fish to keep the tank running smoothly.

Is a Siamese Algae Eater Right for Your Aquarium?

The Siamese Algae Eater can make an excellent addition to many freshwater setups, but they’re not always a perfect fit.

As we discussed above, Siamese Algae Eaters are usually a pretty shy and peaceful species, so your current tank inhabitants are going to be the main factor when deciding whether or not they’re a good addition to your tank.

If you have any large, aggressive or overly-nippy species, such as cichlids or large catfish, you should probably avoid the Siamese Algae Eater and go for something a bit tougher like a Plecostomus.

Siamese Algae Eaters also prefer planted aquarium, so you should consider adding some beginner-friendly live plants if you haven’t already (although this is not a must).