The name Plecostomus is one that just about everyone who has kept fish is familiar with. It immediately invokes the small brown Common Pleco (Hypostomus plecostomus), a drab but effective algae eater. But as it turns out, there are many more Plecos in the family than the Common Plecostomus!

One of my favorites is the small, attractively striped Clown Pleco. They are dwarves in comparison to Common Plecos, which grow over 2 feet in length. They are suitable for much smaller tanks as a result but still eat algae.

What are Clown Plecos?

Clown Plecos are uncommon compared to Common Plecos but still very easy to find. They rarely grow beyond 4 inches, making them perfect for tanks as small as 15 gallons.

If you’re a fan of Plecos you may be aware of the L-number classification system. Back in the late 80’s there were dozens of new Pleco species being discovered in South America and imported into the hobby.

Since scientifically describing new fish can take years or even decades the L-number system was a way for ichthyologists (fish-scientists) to quickly categorize loricariid (suckermouth) catfish.

Clown Plecos are at this point fully described but there are a few variants in the wild that may or may not be unique species. So wild imports may go by the descriptions L104, L162, or LDA22.

Like many of the more unusual types of suckermouth catfish, Clown Plecos have some interesting dietary requirements you’ll have to take into account. But should you provide for those and give them good water quality they are one of the few Plecos that will breed in captivity!

One of the best aspects to keeping Clown Plecos is how little space you need. Unlike their larger cousins they will thrive in aquariums as small as 15 gallons as adults and 10 gallons as 1-2 inch juveniles.

Unfortunately they are territorial, however. A small group of Clown Plecos will fight over who gets the best access to hiding spots and grazing areas for algae and driftwood. You need to aquascape with territories in mind if you intend on keeping a few together.

But once they are mostly grown there are a few ways to reliably sex them to avoid conflict, which I’ll cover below!

You should also provide extra space if you’re keeping other medium to large Plecos with them. Dwarf species like Otocinclus will be ignored. But similarly sized types like Bristlenose Plecos may be aggressively chased on occasion.

Like most catfish, Clown Plecos aren’t too picky when it comes to water quality. They thrive in tropical conditions and prefer temperatures between 75-84℉. They can be kept a few degrees colder or warmer but begin to stress at that point. Temperature extremes, especially cold, open them up to opportunistic infections like ich and fin rot. 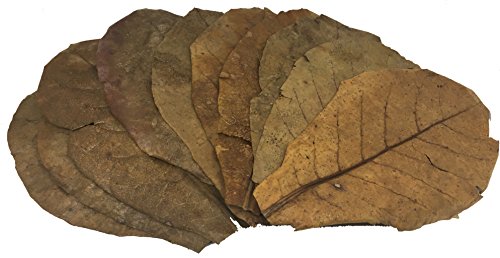 Clown Plecos will also do well in alkaline aquariums (pH 7.0+) but they absolutely thrive in acidic to neutral water chemistry (pH 5.5-7.0). Hardness isn’t too important but the softer the water the better.

In the wild they are found in flooded forests and other high acidity, low hardness environments. At home you can use Indian Almond leaves and other sources of plant tannins to ensure the water stays buffered towards acidity.

But aquarium driftwood is by far the best source. Choose wood varieties that carry loads of tannins and humic acids like Mopani wood or Sumatran driftwood.

Live plants are always a good idea when keeping Clown Plecos. They lock away nitrogenous waste products (ammonia, nitrite, nitrate) as plants use these to fuel their growth.

Clown Plecos will eat algae but tend to leave nearly all live plants alone. They may decide to nibble them if they aren’t getting enough food, however. Some aquarists expect their plecos to survive solely on algae and leftover fish food. Or worse, they are told that “plecos eat fish poop,” which is sadly mistaken.

Soft plants like Cabomba or Elodea may get nibbled on occasion but if you’re providing fresh vegetables, algae, prepared foods, and driftwood for them, they should still thrive. I recommend keeping plants that grow quickly enough in a planted tank to form a murky bottom area.

In such a shady tank you’re much more likely to see your Clown Plecos out in the open. In clear, brightly lit tanks they will tend to hide during the day most of the time unless food is available and they’re too hungry to resist.

The substrate is important to Clown Plecos since they don’t dig. Your best choices are planted aquarium substrates that ensure your live plants thrive. You can also go with inert substrates like gravel or sand, though I do recommend a dark substrate to help fish colors pop!

Clown Plecos are some of the easiest fish to find tank mates for! They are peaceful (except among each other), bottom dwelling, non-predatory, and not too small but not too large.

Like most suckermouth catfish they are also heavily armored and have defensive spines on their fins, allowing you to keep them with larger fish. Even Cichlids up to 8 inches long like Jack Dempseys will have a hard time bothering a spiny, armored Clown Pleco that doesn’t wish to be bullied.

If push comes to shove they also have even sharp, retractable spine clusters on their gill covers that can be used as weapons! But these are typically employed only in life or death situations – or if they find themselves caught in a net!

So be very careful when catching Clown Plecos because these defensive barbs get entangled in the fine weave of nets easily. They can also puncture the plastic carry-home bag during the ride home. So don’t let it sag too much and check on them every now and again.

Just about any fish under 8-10 inches long will make a great tank mate for a Clown Pleco. This includes a very wide range of community fish, including Barbs, Gouramis, Cichlids, Bettas, etc.

They can also be kept with much smaller fish with no issues, including Tetras, Danios, Livebearers, and the like. The only real exceptions are other Plecostomus as they may act territorial towards other species. They compete for the best grazing and hiding spots and even other Pleco species are challengers.

So long as you provide each with plenty of space and access to driftwood and algae grazing space they will do okay. You may see the occasional chase and display but they don’t have the teeth or desire to inflict permanent damage to each other.

Clown Plecos are also peaceful towards invertebrates, including shrimp and snails.Overall, they are model community tank inhabitants!

Feeding Clown Plecos takes a little more planning than you might expect. Because they actually have specialized dietary needs that unfortunately get ignored by most aquarists.

As I mentioned earlier, they are found in rivers that periodically flood into the surrounding rainforest. The nearby trees also drop branches and wash entire trunks into the rivers and streams occasionally.

Clown Plecos have an abundance of waterlogged wood to gnaw on in nature. The older and softer the wood becomes the more nutritious and easier to digest it is for the Plecos. The wood gets worked on by bacteria and fungi, which also provide additional nutrients to the Clown Pleco once consumed.

They also graze continually on the biofilm that forms on all aquarium driftwood. Biofilm is a catch-all word for the microbial slime that you’ll often feel when you touch items that have been in your aquarium for a while.

It forms on the glass and plastic items but it grows much better on plants, rocks, and especially driftwood. Driftwood is spongy and full of holes on a microscopic level, making it the perfect medium for microorganisms to grow in!

As you might expect, driftwood provides loads of fiber that acts as a digestive aid for them. In tanks without driftwood, wood-eaters suffer in health and rarely live out their entire natural lifespan.

Supplement their driftwood, algae, and biofilm diet with boiled vegetables like spinach and squash. Clipped to the side of the tank, your Plecos will make short work of them. You may want to provide multiple pieces if you have more than one since they won’t share with each other…. 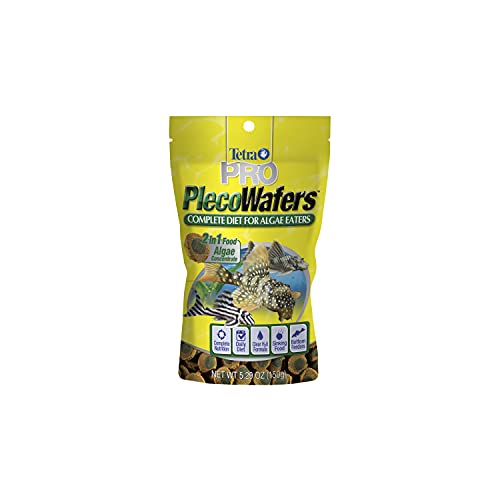 Prepared foods rich in vegetables like Spirulina flakes and algae wafers are also excellent to keep on hand. Remember that these won’t replace actual driftwood or vegetables though, so use sparingly. Clown Plecos need their fiber!

Most Plecos stubbornly refuse to breed in captivity but Clown Plecos are the rare exception! Being so small and having been bred in captivity for decades already they are a lot less picky about breeding conditions than their relatives. Still, water quality and tank decorations are by far the most important parameters.

Even in captivity, Clown Plecos use seasonal triggers to prepare for spawning. During the rainy season, the rivers flood, giving Plecos access to caves, holes, and other hideaways along the river bank.

The influx of fresh water causes the hardness and pH to quickly drop. The best way to simulate this shift is to allow the water level to remain low in your aquarium for a few weeks and to drop the temperature 3-5 degrees.

Then, refill the aquarium using distilled or reverse osmosis (RO) water, both of which don’t have dissolved minerals. This influx of pure water simulates the spring rains and stimulates your Clown Plecos to begin producing games (eggs and sperm).

Clown Plecos are cavity spawners and need a pipe, clay pot, or other tiny cave to lay their eggs in. It need not be too spacious; in fact as you’ll see in this video, they prefer a rather tight fit!

You can also catch a glimpse of the most important sexual characteristic of male Clown Plecos: their cheek spines. Other than being slightly plumper when ready to spawn, females look nearly identical to males.

But males have significantly longer bristles that they flare at each other when fighting or trying to impress a potential mate. Many other wood-eating Plecos have these, including Bristlenose Plecos (Ancistrus sp.).

If you have multiple males you should provide several spawning areas as they will fight for access to the best caves. Once a pair of Clown Plecos pairs off, the female will be enticed into a cave by the male where she lays her eggs.

The male will fertilize them and then stand watch over them while they develop. If you’re interested in seeing their parental behavior you can keep the eggs with the male or remove them to a separate quarantine tank to raise them yourself.

The eggs will hatch in 10-14 days whereupon the male will watch the newly hatched fry for the 2-3 days it takes for them to absorb their yolk sac. Once the fry become free swimming he leaves them to their fate.

Fortunately, raising Clown Pleco fry is as easy as it gets because they eat the same thing as their parents. Simply provide loads of biofilm and algae in a mature aquarium combined with occasional vegetables and prepared vegetarian foods.

Within a few months your young Plecos will be large enough to move into the main aquarium or be sold to your local fish store!