As you probably already know, Goldfish have their origins in ancient China. Golden hued metallic carp were bred for beauty out of the standard greenish colored variety that were raised for food. The Chinese developed several lines that emphasized top viewing pleasure (for Koi ponds since aquariums weren’t a thing yet) and coloration.

The Japanese were quick to catch Goldfish fever, developing many of their own bloodlines and aesthetics. However it wasn’t until 1900 that the Shubunkin came into being in Japan.

Shubunkins are calico Goldfish that have what are called nacreous (pearly) scales. Unlike metallic and matte scaled goldfish, they have reflective layers of guanine crystals that alter their sheen and how we perceive their colors!

In a metallic black Goldfish, the color is a true black but as you may know, it tends to be very unstable. Sometimes your Black Comet or Black Moor will develop orange patches – or fade entirely to orange! This can happen due to ammonia levels, genetics, or seasonal factors.

Shubunkins, having nacreous scales, don’t ever fade or lose their black. In fact, they tend to gain more black scales as they age. The blue and grey patches occur depending on how much melanin (black pigment) is present and where the guanine layers sit in the scales.

So now that we know what makes a Shubunkin Goldfish special, let’s talk about how to care for them!

Goldfish start out cute and small but they really aren’t very good fish for bowls. Most varieties reach anywhere from 6-24 inches in adulthood. And breeds that have bodies shaped like wild Goldfish, like the Shubunkin, grow larger than most.

That’s why I recommend 30 gallons as a minimum for an adult Shubunkin or two. However, you can easily keep young Shubunkins in a 10 or 20 gallons space for many months!

Space is very important for Goldfish, not only because they grow big, but because they are very messy fish. Goldfish can foul your water very quickly, causing water quality to plummet. Having a larger volume of water ensures change happens much more gradually.

Shubunkin Goldfish are not only large and beautiful but extremely hardy. They thrive in a wide range of water conditions. Temperature-wise, everything from room temperature to mild tropical conditions are just fine. I wouldn’t keep a Shubunkin any warmer than 72-75℉ with cooler always being better for their health.

Due to their cold resistance Shubunkins are also excellent in-ground or outdoor container pond fish. They aren’t as far removed from their wild roots as Orandas and other fancy goldfish breeds. With a brief float in a bag to equalize the temperature your Shubunkin will thrive in most temperate climates.

They also overwinter very well so long as the pond has an area at least 3 feet deep in places where the surface ices over. When this occurs your Goldfish enter a winter hibernation state. Their metabolisms slow to a crawl and they stop feeding until springtime. 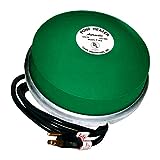 If the pond is large enough and you don’t have many fish, the trickle of oxygen that reaches under the ice is enough to keep them alive until spring. But if you have either a small pond or lots of fish, you’ll need to keep a hole open in the ice for gas exchange.

Pond de-icers do exactly this to ensure your fish don’t suffocate before you can get outside to chip and maintain a hole in the ice.

Chemistry-wise, Goldfish thrive in slightly acidic to slightly alkaline conditions (pH 6.5-7.5). However they still do very well even in more acidic or alkaline waters! They have been raised in captivity for centuries and are very unpicky.

Just keep ammonia, nitrite, and nitrate levels as close to 0ppm as possible. Shubunkin Goldfish are more resistant than most fish to elevated nitrogenous waste. But it’s still stressful to them and opens them up to opportunistic diseases like ich and fin rot.

Plants and substrates are probably the most difficult thing about keeping Shubunkin Goldfish because they love to dig! Goldfish spend most of their time either begging from you at the surface or rooting in the dirt for hidden goodies.

All of this digging is unfortunately hard on plants, which don’t like their roots being constantly disturbed. Shubunkin Goldfish will also eagerly eat soft leaved plants like Cabomba and Elodea.

If you really want to keep your Shubunkins with live plants, choose tough leaved epiphytes like Anubias or plants securely rooted in gravel. Epiphytes are plants that don’t grow in gravel or sand.

They actually attach themselves to rocks, driftwood, and other hard surfaces. Epiphytes also tend to be tough and taste terrible to all but the most determined vegetarians!

If you’re trying to decide between sand and gravel in your Goldfish tank, I generally recommend gravel. It’s harder for them to move about. They will tend to spit it out right back in place.

Sand, on the other hand, tends to form little piles where the Goldfish dig. Plants rooted in sand are also easier for your Shubunkins to uproot!

If you’re looking to keep your plants in place, use leaded plant weights, which wrap around the base of the stems. They are safe for fish and keep them from being moved about, helping your plants stay well rooted and healthy.

Goldfish are some of the easiest fish to find tank mates for so long as they are compatible in terms of temperatures. Unfortunately, many of the most common community fish prefer much warmer temperatures, such as Bettas, Gouramis, and Angelfish (78-84℉).

Most Livebearers (Platies, Guppies, Mollies, etc) thrive even in room temperature water as do Danios and Barbs.

Dojo or Weather Loaches (Misgurnus anguillicaudatus) are very popular tank mates for Shubunkin Goldfish. They get their name from their habit of becoming extremely active when the barometric pressure in the air changes. This often signals an incoming storm!

Avoid keeping Shubunkin Goldfish with aggressive tank mates or those that are too tiny. Freshwater Shrimp and Ramshorn Snails will eventually be a nice snack to a medium-sized Goldfish. Livebearer fry will also likely be eaten but the adults should be safe.

Aggressive or territorial fish like larger Cichlids should be avoided at all costs. Goldfish have no concept of “territory” and they will be harassed continually in a small aquarium. Red Tail Black Sharks and many large Catfish are also very territorial bottom dwellers.

Feeding a Shubunkin Goldfish is definitely the easiest part about keeping them! Goldfish are omnivores, meaning they need both plant and animal matter (just like us)! They should be given a wide variety of food beyond prepared flakes or pellets.

Shubunkins love lightly boiled and soaked vegetables like lettuce, squash, spinach, or peas! This greenery gives them plenty of roughage to help with digestion. Bunches of softer live plants are also appreciated. 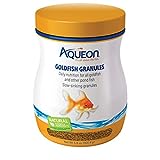 Alongside a high quality Goldfish pellet you should offer them meaty items like worms, insects, and frozen foods like brine shrimp, bloodworms, and daphnia! You can even make your own DIY fish food that has a solid blend of vegetables and meat enriched with vitamins that ensure your Shubunkins thrive!

Goldfish in general aren’t exactly hard to breed but it can be a little time consuming and tricky. The hardest part of breeding Shubunkin Goldfish is finding a male and female because they look identical most of the time!

If you want to ensure you get babies you should pick 4-6 young Shubunkins and raise them together. The odds favor you getting one of each sex this way.

Once your Shubunkins are sexually mature (4+ inches) it gets easier to tell them apart, though. Male Goldfish have what are called breeding tubercles on their gill covers and heads! These bony protrusions are a pale white in color and let both other Goldfish (and you) know he’s hormonally charged and ready to spawn!

There is plenty of room for feathery live plants for them to spawn in. The eggs and young also stay hidden, meaning they are much more likely to not be eaten and reach adulthood. 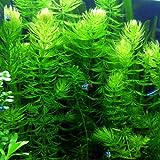 Goldfish typically spawn in the late spring or early summer once the ice melts and water temperatures begin to climb. The males and females embrace in tangled plants like Hornwort or Guppy Grass.

As egg scatterers, Shubunkin Goldfish provide no care for their young. The eggs released into the water attach directly to any plants or rocks they come in contact with. Assuming your Goldfish spawn in an aquarium, you should remove the decorations to a separate tank for raising the fry.

Once the eggs hatch, the babies will spend all of their time sitting at the bottom. Since they have literally no mouth and a fat yolk sac to feed from, don’t bother offering them food as it will only foul the water.

In 3-7 days, you’ll start seeing them swimming freely. At this point it’s time to offer them tiny items like brine shrimp nauplii (which you can raise yourself) and infusoria!