Blennies are something of a craze among nano reef and small community fish aquarists! They are active crawlers that munch on plankton, algae, and other slimy films that come in an astounding array of colors and patterns.

Blennies are also very diverse in habits. Some, such as the Tailspot Blenny, actively swim about, while others simply watch the world go by from the mouth of their caves. It’s unfortunate that they are mostly intolerant of one another because a blenny tank is fascinating to watch.

But if you’re interested in trying one of these small, easy to keep nano fish, then let’s talk more about Tailspot Blennies!

What are Tailspot Blennies?

You’ll typically find Tailspot Blennies in the Western Pacific Ocean. They live in reefs centered around the Philippines, Indonesia, and other tropical archipelagoes.

Tailspot Blennies are a joy to keep because they are quite active and have colors that are generally handsome but occasionally take on intense, beautiful tones. They have excellent eyesight and bulbous eyes that immediately draw attention to them.

As they swim about and perch on rocks, they have a charming way of physically turning their entire heads to stare at things, including you. They survey their surroundings the way a person would, adding to their appeal!

At first, Tailspot Blennies tend to be shy and retiring when added to a new tank. Especially in algae-filled aquariums where they aren’t reliant on the aquarist to keep them fed. They may dash away for over a week if any sudden movements happen near the tank.

But eventually, they mellow out and become active, inquisitive members of your community tank. Tailspot Blennies spend most of their time hovering about your corals and live rock seeking algae to graze on.

Since they are mostly vegetarian you’ll need to ensure they get the nutrients they need by feeding them nori (pressed seaweed) and plant-based prepared foods frequently. However they will also eat standard prepared flakes and pellets.

Curious to learn more? Then let’s delve into how to care for these tiny grazers!

Thanks to their small size, gentle disposition, hardiness, and affordability, the Tailspot Blenny is an excellent fish for beginners and experts alike.

Tailspot Blennies rarely grow beyond 2 inches in size and are usually sold anywhere from ¾ to 1½ inches in length. Their bioload is next to nothing as a result and they make excellent inhabitants for aquariums as small as 10 gallons. With a few other tank mates, perhaps a Clownfish and a Blood Red Fire Shrimp, you can have a thriving nano reef or fish only tank in a small amount of space!

There are two reasons why you might consider upgrading to a larger tank when keeping Tailspot Blennies, though. The first is due to their eating habits. Since Tailspot Blennies feed on algae and biofilm growing on live rock, there may not be enough food to keep them satisfied if you’re keeping multiple grazing animals.

The second is if you want to keep additional Tailspot Blennies. Sometimes you can find mated pairs of Tailspot Blennies for sale. But getting them to live together is sometimes a challenge as they can be territorial towards one another. Some aquarists end up having no issues while others find that their Tailspot Blennies fight viciously, especially males.

If you want to keep multiple blennies together, your best bet is to go with an aquarium 40 gallons or larger in size so fights are less frequent. Also, each Tailspot Blenny will have room to peacefully graze and move out of the line of sight of the dominant fish.

Tailspot Blennies are very hardy and thrive in standard conditions for both fish-only and reef aquariums. This means a specific gravity (salinity) of 1.020-1.025 and temperatures from 72-78℉. While ammonia, nitrite, and nitrate should be as close to 0 ppm as possible, Tailspot Blennies aren’t especially sensitive and can tolerate low levels of all three agents.

This makes them great fish to begin cycling a new aquarium with. All fish start to show stress above 30 ppm of nitrate, however, so make sure you’re performing regular water changes to export nitrate from your system. 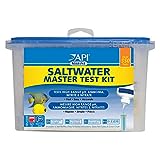 Also, frequent water tests are very important when first starting an aquarium because the biological filtration capacity of your tank is still starting out. If you overfeed or don’t do enough water changes ammonia spikes can occur, leading to New Tank Syndrome and the death of your blenny.

Tailspot Blennies are active swimmers but don’t appreciate being forced to navigate strong currents. They typically dart about and hug rocks looking for algae, tiny invertebrates, and biofilm to eat.

Small, peaceful, and even shy, Tailspot Blennies are ideal community tank residents, with two exceptions. First, you need to keep them away from fish that are large or aggressive enough to intimidate them.

Predators like Lionfish, Groupers, Moray Eels, and the like need to be avoided because the small, slim profile of Blennies makes them especially easy to swallow. Territorial fish like certain Angelfish, larger Damselfish, Dottybacks, and Hawkfish are also poor matches for these peaceful grazers.

Second, you need to be careful when keeping them with other Blennies, Gobies, Firefish, Mandarin Gobies, and similar slim, bottom dwelling fish. All of these fish tend to show varying degrees of aggression towards one another because they compete for the same food sources and hiding places.

Tailspot Blennies tend to be more mild mannered than most but you may find yours to be aggressive and intolerant, especially in a smaller aquarium and most especially towards other Tailspot Blennies. There’s unfortunately no way to really predict how your Blenny will behave beforehand. So your best bets are to provide plenty of hiding places for your fish as well as as much space as you can afford.

Fortunately, they get along well with the vast majority of small saltwater community fish. Smaller Damselfish, Clownfish, Sea Horses, Pygmy Angelfish, Tangs, Grammas, and Basslets are just a few of the fish that should have no problems living with a Tailspot Blenny.

They also get along very well with all invertebrates, including shrimp, starfish, sea anemones, and both LPS and SPS corals. A few aquarists note that they may irritate corals and clams on occasion but only due to the Blennies continual grazing and it missing where the hard surface ends and the fleshy polyp begins. As algae eaters, Tailspot Blennies don’t actively eat corals and other sessile invertebrates and are entirely reef safe!

Tailspot Blennies aren’t too picky when it comes to eating. That said, they are mostly herbivores and should be offered a diet that matches their preferences. In the wild, you’ll find Tailspot Blennies grazing on algae and biofilm-covered live rock.

Macroalgae is a bit of a scourge in mature reef aquariums because it competes with corals for living space and light. If nitrates, phosphates, or other elements get out of control, it can even overgrow and smother your corals. This makes the Tailspot Blenny a natural addition to the reef-keeper’s marine clean up crew.

Tailspot Blennies are better additions to mature reef aquariums for this reason. Once a bit of algae and biofilm has accumulated your blenny will have a constant source of food that’s perfect for its needs.

In a large enough aquarium you may not even need to feed it as the algae will slowly regrow as the blenny shifts to richer feeding grounds. They will tend to compete with other grazers, though. Keeping Tailspot Blennies with Lawnmower Blennies, Pygmy Angelfish, Tangs, and other algae eaters will reduce the overall amount of natural food for all of your inhabitants.

Therefore, it’s essential to keep a ready supply of sea vegetables on hand for your plant eaters. Nori can be clipped onto the glass or weighted so that it sits on the bottom, making it a great food source for Tailspot Blennies. You can supplement their diet with vegetable-based pellets and flakes as well as terrestrial greens like blanched spinach, squash, and other tasty crops.

They do have an omnivorous side as in nature they tend to eat small invertebrates and worms they find among the algae. Your Tailspot Blenny will eagerly eat standard flakes and pellets along with frozen foods like brine and mysis shrimp. But greens do need to be the foundation of their diet to avoid malnutrition and disease.

Tailspot Blennies occasionally breed in captivity. Given how easy they are to feed and care for, it’s unsurprising. But the main challenge is getting past their aggression towards one another. Unfortunately most Blennies are very intolerant of even other species of Blenny. Sometimes they even take it out on Gobies, Firefish, and other similar looking fish.

The reason for this is competition for living and feeding space. Blennies are extremely territorial when it comes to both; they want the best holes to retreat to when danger lurks and they’ll fight each other for them.

Also, since their food is abundant but slow growing, they want to control the feeding grounds close to the best hiding places. So in order to do so, they chase away any nearby competitors, including other Blennies, to ensure their gardens don’t get overgrazed.

Another major challenge to breeding Tailspot Blennies is the lack of obvious sexual characteristics. The Blennies can certainly tell but it’s very hard for aquarists to do so. Keeping two of the same sex is bound to lead to conflict, so here are some ways to go about sexing Tailspot Blennies.

Male Blennies of most species have slightly extended front dorsal fin rays but Tailspot Blennies lack this feature. Instead, you’ll have to rely on both size and a view of the sexual organs when extended. Males are almost always larger than females of the same age, so if you have a group of Tailspot Blennies for sale, choosing both the largest and smallest within the group gives you a good shot of getting a match.

And after a heavy meal, you may see the genital organs of your fish extended due to pressure from the full stomach. Male blennies have a more pointed organ while the ovipositor of the female is noticeably rounder.

Like most blennies, Tailspots are cavity spawners. They lay their eggs in caves, pipes, empty shells, and other cavities. The male then guards the eggs, which are typically stuck to the ceiling and walls, until they hatch and the fry can swim freely. Like the adults, the fry feed on algae and biofilm. So a mature reef aquarium full of growing film is the best place to keep Tailspot Blennies since the fry will look after themselves once they absorb their yolk sac!